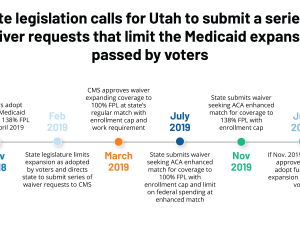 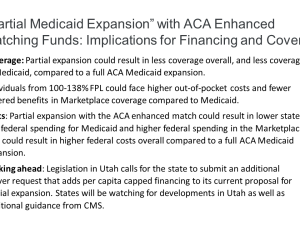 This fact sheet provides a summary of the proposal to expand Medicaid in Utah. This has not been officially submitted to CMS and needs state legislative approval before it could be implemented.

Putting Medicaid in the Larger Budget Context: An In-Depth Look at Four States in FY 2014 and 2015

This report provides an in-depth examination of Medicaid program changes in the larger context of state budgets in four states: Michigan, Utah, Virginia, and West Virginia. These case studies build on findings from the 14th annual budget survey of Medicaid officials in all 50 states and the District of Columbia conducted by the Kaiser Commission on Medicaid and the Uninsured and Health Management Associates (HMA.)