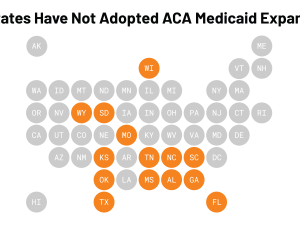 This brief will examine similarities and difference across key elements of DSRIP waivers. The states included in this analysis are: California, Texas, Kansas, New Jersey, Massachusetts, and New York. The key elements of DSRIP initiatives that will be explored in this analysis include: the goals and objectives of the DSRIP initiative; eligible providers; projects and organization; allocation of funds; data collection and evaluation/reporting; and financing of DSRIP waivers.

How Will the Uninsured in Kansas Fare Under the Affordable Care Act?

The 2010 Affordable Care Act (ACA) has the potential to extend coverage to many of the 47 million nonelderly uninsured people nationwide, including the 369,000 uninsured Kansans. The ACA establishes coverage provisions across the income spectrum, with the expansion of Medicaid eligibility for adults serving as the vehicle for covering…

Final update made on March 21, 2013 (no further updates will be made) Establishing the Exchange After placing health insurance exchange planning on hold until after the November elections, Governor Sam Brownback (R) announced on November 9, 2012, Kansas would default to a federally-facilitated exchange.1,2 With the initial endorsement of…