This analysis presents findings on Medicare Part D enrollment, premiums, and cost sharing in 2018 and key trends over time, based on data from the Centers for Medicare & Medicaid Services (CMS). 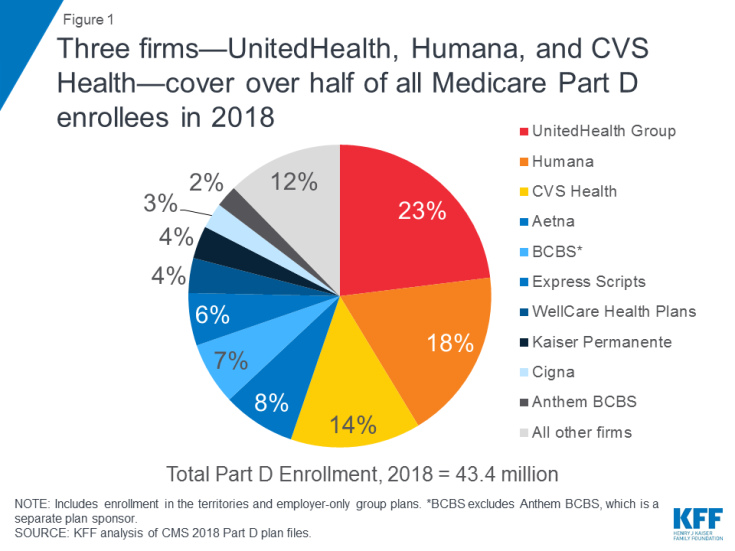 Figure 1: Three firms—UnitedHealth, Humana, and CVS Health—cover over half of all Medicare Part D enrollees in 2018

This total includes plans open to everyone and employer-only group plans for retirees of a former employer or union (Figure 2). Most Part D enrollees (58 percent) are in stand-alone prescription drug plans (PDPs), but a rising share (42 percent in 2018, up from 28 percent in 2006) are in Medicare Advantage prescription drug plans (MA-PDs), reflecting overall enrollment growth in Medicare Advantage. 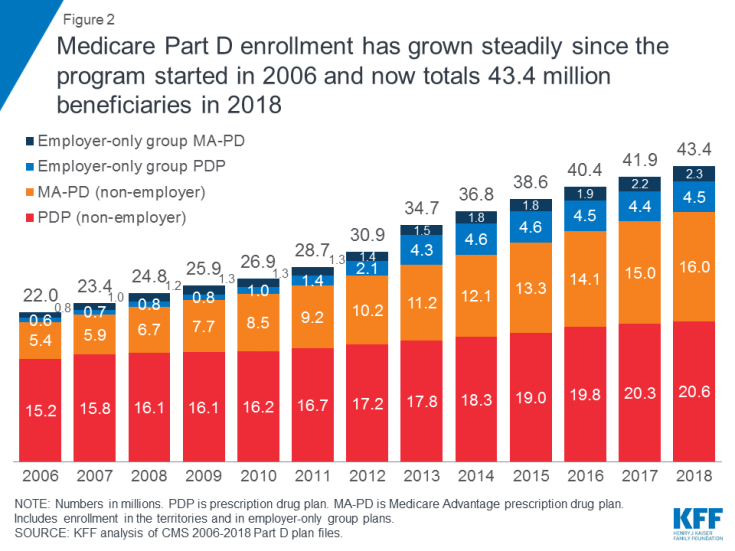 Figure 2: Medicare Part D enrollment has grown steadily since the program started in 2006 and now totals 43.4 million beneficiaries in 2018

In 2018, three Part D sponsors account for more than half of all Part D enrollees and two-thirds of all PDP enrollees.

UnitedHealth, Humana, and CVS Health cover more than half (55%) of all beneficiaries enrolled in Part D in 2018, and two-thirds (67%) of all stand-alone PDP enrollees (Table 1). UnitedHealth and Humana have had large market shares since the program began, while enrollment in CVS Health has grown over time through acquisition of other plan sponsors (Figure 3). 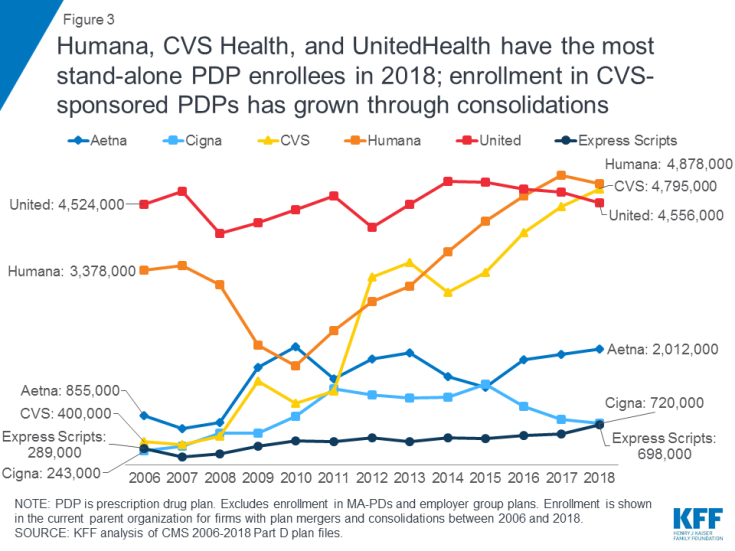 Figure 3: Humana, CVS Health, and UnitedHealth have the most stand-alone PDP enrollees in 2018; enrollment in CVS-sponsored PDPs has grown through consolidations

The proposed mergers of CVS Health and Aetna, and Cigna and Express Scripts would result in further consolidation of the Part D marketplace. If these mergers go through, four firms—the two merged firms plus UnitedHealth and Humana—would cover 71 percent of all Part D enrollees and 86 percent of stand-alone drug plan enrollees, based on 2018 enrollment.

The ten largest sponsors of Part D plans account for nearly 90 percent of all enrollment. 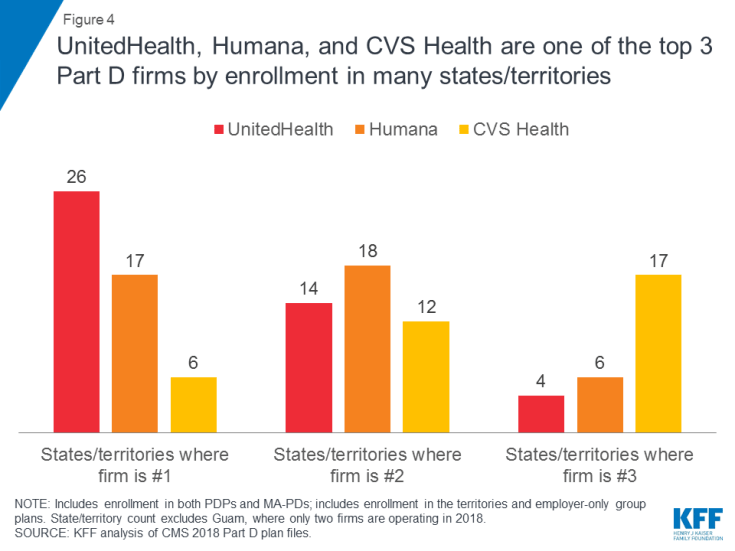 Figure 4: UnitedHealth, Humana, and CVS Health are one of the top 3 Part D firms by enrollment in many states/territories

CVS Health, which sponsors PDPs but not MA-PDs, is the top Part D firm in only 6 states/territories, but is among the top 3 firms in 35. Together, three firms—UnitedHealth, Humana, and CVS Health—occupy all of the top 3 spots in terms of Part D 2018 enrollment in 19 states and territories (in varying orders).

Among PDPs, at the plan level, SilverScript Choice PDP (sponsored by CVS Health) has the most enrollees in 2018, covering more than 1 in 10 Part D enrollees, or 4.6 million (Table 3). This total is nearly double that of the second most popular plan, AARP MedicareRx Preferred (sponsored by UnitedHealth), with 2.6 million enrollees.

PDP premiums have risen modestly in recent years; for 2018, the average PDP premium is $41 per month.

PDP enrollees are in plans with an average monthly premium of $41 in 2018, a modest 2 percent increase over 2017 but up by 11 percent since 2015 (Figure 5). The combined average Part D premium for PDP and MA-PD enrollees is $32 in 2018. This is lower than the average for PDPs due in part to the ability of MA-PD sponsors to use rebate dollars from Medicare payments for benefits covered under Parts A and B to lower their Part D premiums. The average MA-PD premium is $34 in 2018, which includes Part D and other benefits. 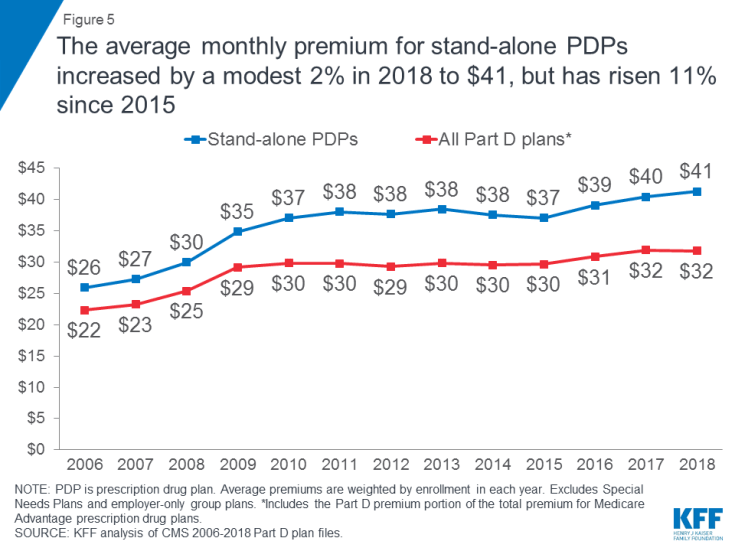 Premiums for 7 of the 10 most popular PDPs increased in 2018, and continue to vary widely across plans.

Monthly premiums for 2 of the 10 largest PDPs–AARP MedicareRx Preferred and Humana Enhanced—increased by more than $10 in 2018 (Figure 6). Premium decreases among the top PDPs were generally of a smaller magnitude; for example, the average monthly premium for SilverScript Choice, the PDP with the most enrollees, fell by $3. 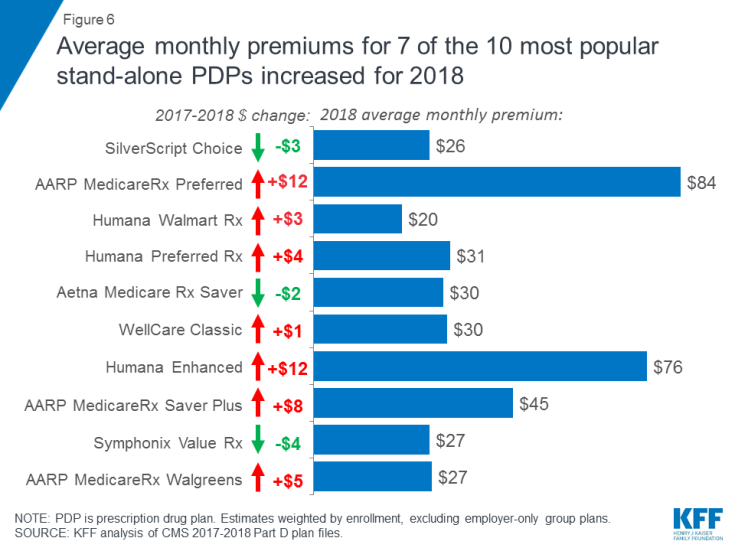 Figure 6: Average monthly premiums for 7 of the 10 most popular stand-alone PDPs increased for 2018

Monthly premiums in 2018 vary widely among the most popular PDPs. Premiums range from $20 per month for Humana Walmart Rx to four times more—$84 per month—for AARP Medicare Rx Preferred.

Among several of the top PDPs, there appears to be an inverse relationship between premium changes from 2017 to 2018 and the year-to-year change in voluntary enrollment among enrollees who are not receiving low-income subsidies (LIS). (Low-income enrollees may be reassigned automatically in response to premium increases under certain circumstances.) 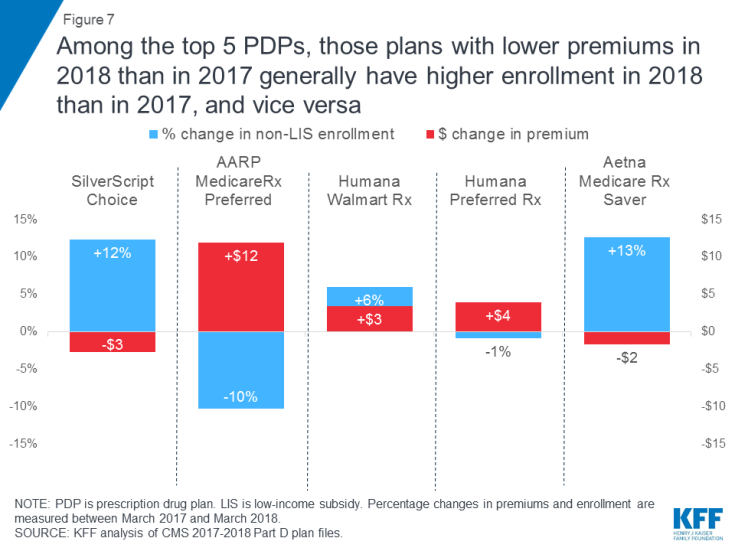 The one exception to this inverse relationship among the top 5 PDPs was Humana Walmart Rx, which experienced a 6 percent increase in enrollment despite a $3 premium increase for 2018 (from $17 to $20). This could be related to the fact that, despite its premium increase for 2018, the Humana Walmart Rx PDP is among the lowest-premium PDPs available in almost all regions in 2018; while some PDPs have lower premiums, they are not available nationwide.

In 2018, more than 4 in 10 Part D enrollees are in plans that charge no deductible for drug coverage.

Around 2 in 10 Part D enrollees have a $0 copayment for preferred generics, but many pay $10 or more for other (non-preferred) generics. 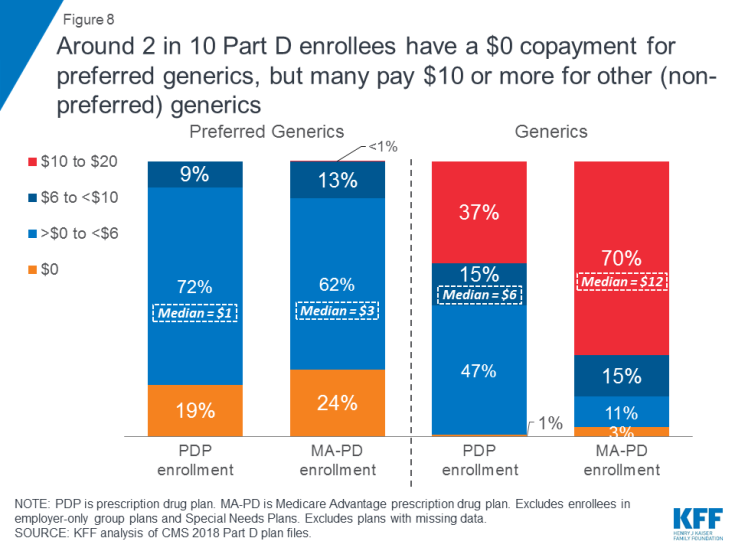 Figure 8: Around 2 in 10 Part D enrollees have a $0 copayment for preferred generics, but many pay $10 or more for other (non-preferred) generics 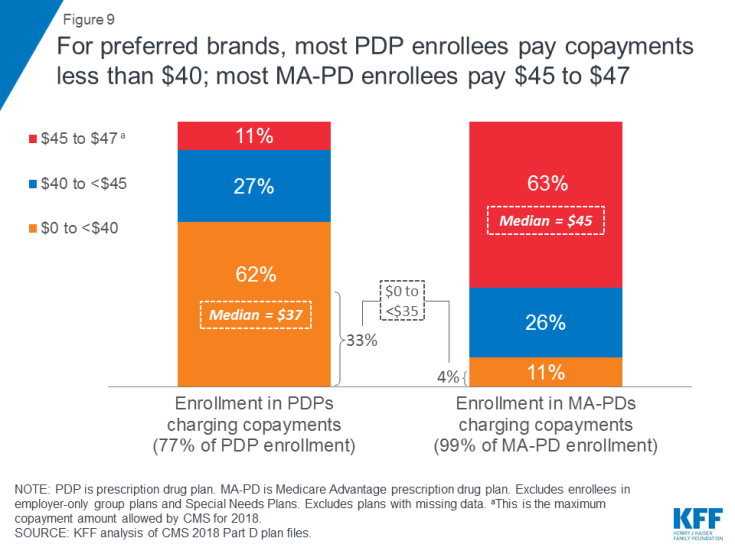 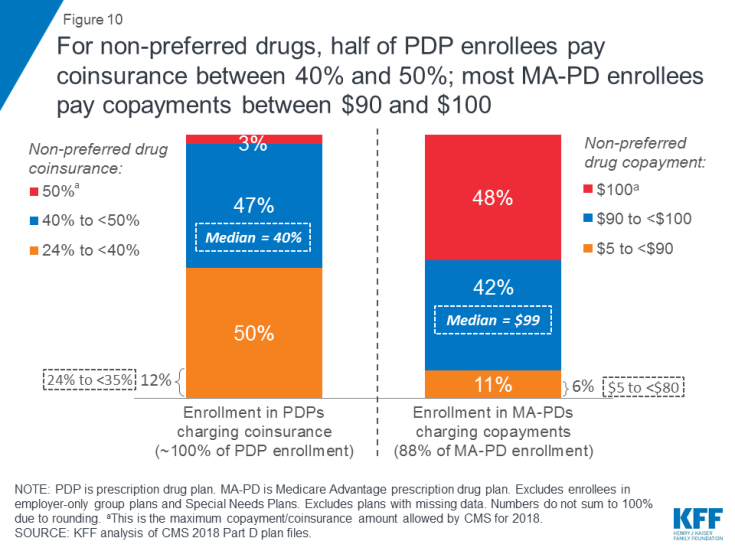 Whether one group of enrollees faces higher average out-of-pocket costs than the other for non-preferred drugs cannot be assessed because of the different approaches to cost sharing that each plan type uses; in particular, the actual out-of-pocket cost that PDP enrollees face who pay coinsurance for non-preferred drugs depends on the list price of the drug.

More than 4 in 10 Part D enrollees are in plans charging 33 percent coinsurance for specialty tier drugs.

Close to half of PDP enrollees (45%) and more than 4 in 10 MA-PD enrollees (42%) are in plans that charge the maximum 33 percent coinsurance rate for specialty drugs, defined by CMS as those that cost at least $670 per month (Table 4). Only those plans that waive some or all of the standard deductible are permitted to set the specialty tier coinsurance rate above 25 percent. 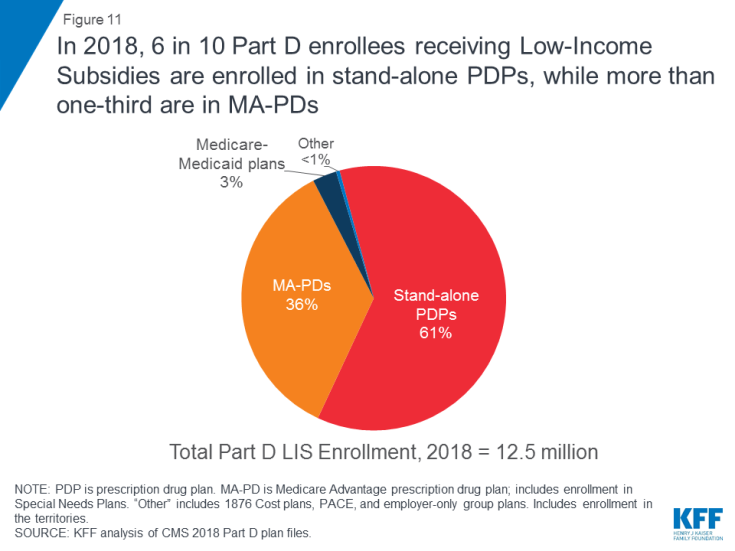 Figure 11: In 2018, 6 in 10 Part D enrollees receiving Low-Income Subsidies are enrolled in stand-alone PDPs, while more than one-third are in MA-PDs

More than 1 million LIS beneficiaries pay premiums for Part D coverage, even though they may be able to obtain coverage with no premium, either through a benchmark PDP or through a zero-premium MA-PD.

In 2018, 1.2 million LIS beneficiaries (10% of all LIS beneficiaries) pay a premium for Part D coverage, even though they may be able to obtain coverage without paying a premium. This total includes 0.9 million PDP enrollees who are not enrolled in benchmark PDPs, and more than 0.3 million MA-PD enrollees who are enrolled in MA-PDs that charge a premium. MA-PDs are not designated as benchmark plans by CMS, although most of the LIS enrollees in MA-PDs are currently enrolled in zero-premium plans.

CMS reassigns some LIS beneficiaries in PDPs to a premium-free PDP during open enrollment if their previous PDP loses benchmark status and charges a premium. But other LIS enrollees are not reassigned by CMS because they have actively selected the plan they are in, whether it is a PDP or an MA-PD. 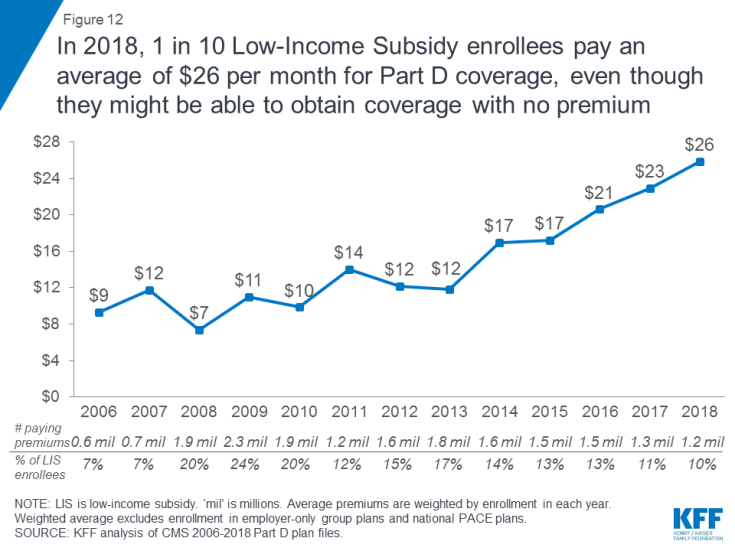 Figure 12: In 2018, 1 in 10 Low-Income Subsidy enrollees pay an average of $26 per month for Part D coverage, even though they might be able to obtain coverage with no premium

This analysis focuses on the Medicare Part D marketplace in 2018 and trends over time. Data on Part D plan availability, enrollment, and premiums were collected primarily from a set of data files released by the CMS on a regular basis:

For analysis of cost sharing for formulary tiers in PDPs and MA-PDs, we did not analyze which drugs are on what tier under each type of plan and whether this has changed over time, factors which would also influence enrollees’ out-of-pocket costs.