Private insurance companies are expecting to pay out $1 billion in rebates to consumers this fall under an Affordable Care Act provision that requires insurers to spend the bulk of customers’ premium payments on care, a new KFF analysis finds.

Rebates are based on insurers’ experiences over the previous three years. This year’s total is roughly half the size of last year’s $2 billion, in part because 2021 was a less profitable year and because the 3-year window no longer includes 2018, when individual market insurers overpriced their ACA marketplace plans due to uncertainty caused by the repeal-and-replace debate and other ACA policies.

This year’s rebates continue to reflect the impact of the COVID-19 pandemic, which led to a sharp reduction in health claims in 2020, when many people skipped care amid stay-at-home orders and medical offices’ closures.

Rebate amounts will vary by market. Individual market insurers are expected to pay out an estimated $603 million in rebates to more than 4 million people, including many covered through the ACA’s marketplaces. Small and large group insurers are expected to pay about $275 million and $168 million respectively to plans that cover about 4 million more people. The amounts are preliminary estimates, with final rebate data coming later this year. 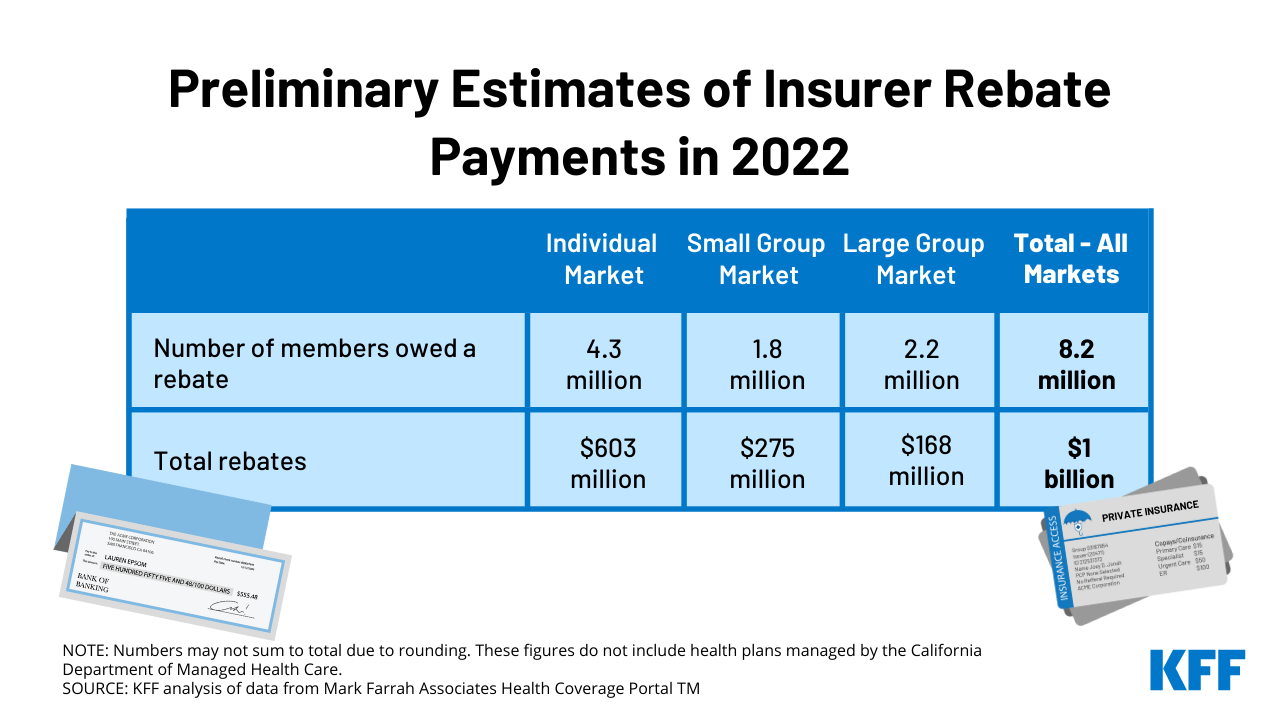 The rebates are the result of insurance companies not meeting the ACA’s medical loss ratio threshold, which requires insurers to spend at least 80 percent of premium revenues (85% for large group plans) on health care claims or quality improvement activities. Higher loss ratios in 2021 could lead to steeper premium increases next year, as some insurers try to regain higher margins.

“The ACA never did much to reduce the rate of increase in national health spending, but it did a lot to make health care more affordable for consumers, from subsidizing coverage, to protecting people with pre-existing conditions, to requiring these rebates from insurers,” KFF President and CEO Drew Altman said.

Not all policy holders are due rebates, but among those who are, this year’s rebates work out to roughly $141 per plan member in the individual market, $155 per member in the small group market and $78 per member in the large group market, according to our analysis of preliminary data reported by insurers to the National Association of Insurance Commissioners, and compiled by Mark Farrah Associates. Insurers will issue the rebates to eligible consumers in the fall.