A new KFF analysis estimates that the Affordable Care Act’s tax on high-cost health plans would affect one in five (21%) employers offering health benefits when it takes effect in 2022 unless employers change their health plans. An even larger share (31%) could be affected when workers’ voluntary contributions to Flexible Spending Accounts are taken into account.

The analysis comes as some in Congress are proposing to repeal the ACA’s tax on high-cost health plans, often called the “Cadillac tax.” Originally scheduled to take effect in 2018 but delayed by Congress until 2022, the tax limits the amount of untaxed health benefits employers can provide to their workers as a tool to slow the growth in overall health spending.

The provision imposes a 40% tax of each employee’s health benefits above a certain threshold, adjusted annually for inflation. In 2022, the thresholds are estimated to reach $11,200 for single coverage and $30,100 for family coverage.

The analysis relies on data from KFF’s 2018 Employer Health Benefits Survey to estimate the share of employers with at least one health plan that would exceed the threshold, with and without FSA contributions since workers could simply stop using those account to avoid the tax.

The analysis projects that the Cadillac tax would affect a growing share of employers over time, reaching 37% in 2030 without including FSA contributions (and 46% with them). 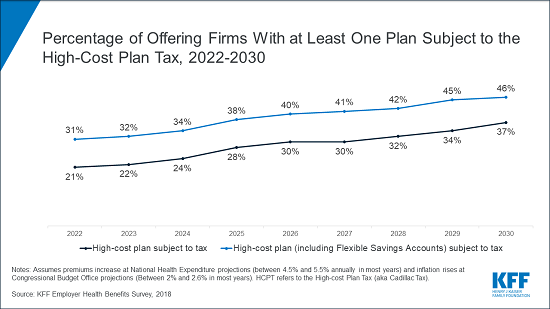 The analysis does not attempt to estimate the share of employers or employees who would pay the tax, just those whose current plans would lead them to exceed the thresholds. It is likely many such employers would modify their plans to avoid the tax – for example, offering lower-cost plans, raising deductibles or otherwise shifting costs to workers to avoid the threshold.

Employer-sponsored insurance is the largest source of coverage for Americans, covering more than 156 million people. In addition to projections, the new analysis also explains how the high-cost plan tax works and describes its implications for how employers structure and administer their health benefits.