Poll: Two Months After Hurricane Maria, A Growing Majority Of Americans Say Puerto Ricans are Not Yet Getting the Help They Need

Two months after Hurricane Maria struck Puerto Rico, a growing majority of Americans say that Puerto Ricans affected by the devastating storm are not yet getting the help they need, the November Kaiser Family Foundation Tracking Poll finds.

This month, 70 percent of the public say that people in Puerto Rico are not yet getting the help they need, up from 62 percent in October 2017. These perceptions vary by party, and half of Republicans (52%) now say Puerto Ricans aren’t yet getting needed help, up significantly from October (38%).

In contrast, Americans see the recovery efforts in Texas following Hurricane Harvey in late August progressing more positively. Most (60%) of the public says Texans are getting the help they need, twice the share (31%) who say Texans aren’t yet getting needed help. 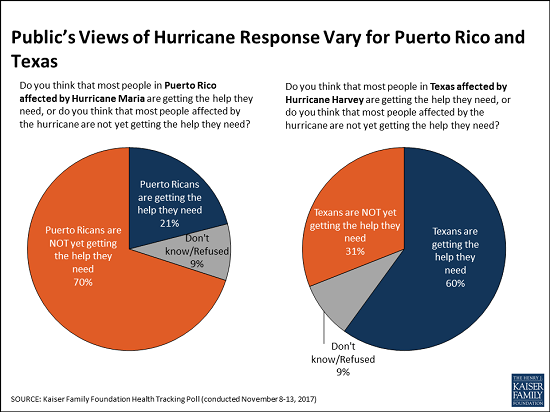