Large majorities of Americans think it should be illegal for either employers or health care providers to discriminate against people because they are lesbian, gay or bisexual, or transgender, a new KFF poll finds. This includes large majorities of Republicans, independents and Democrats across a range of questions about such discrimination.

The poll gauges the public’s views following two major developments this month that move in opposite directions on LGBTQ protections. First, the Trump administration finalized regulations removing protections based on sexual orientation and gender identity (including transgender status) in health care, arguing that the definition of sex does not extend to either. Then last week the U.S. Supreme Court ruled that gender identity and sexual orientation are protected under the definition of sex discrimination in the workplace.

In each case, large majorities across partisan lines, including more than 7 in 10 Republicans, think such discrimination against LGBTQ people should be illegal. 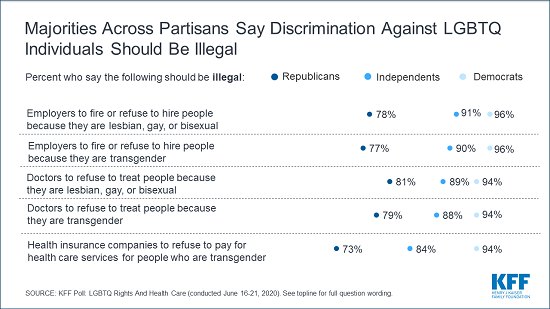 “Most Americans – including most Republicans — oppose discrimination against people who are lesbian, gay, bisexual, or transgender,” KFF President and CEO Drew Altman said. “The public is shifting more quickly on these issues than the political and legal landscapes are.”

Designed and analyzed by public opinion researchers at KFF, the poll was conducted June 16-21 among a nationally representative random digit dial telephone sample of 1,001 adults using the SSRS Omnibus Poll. Interviews were conducted in English and Spanish by landline (263) and cell phone (738). The margin of sampling error is plus or minus 4 percentage points for the full sample. For results based on subgroups, the margin of sampling error may be higher.