As Congress weighs major budget cuts and structural changes to Medicaid as part of its effort to repeal and replace the Affordable Care Act (ACA), majorities of the public are wary of those changes to the program that covers medical and long-term care for millions of low-income Americans, the latest Kaiser Family Foundation tracking poll finds.

The poll gauges the public’s views on major Medicaid changes in the American Health Care Act, which narrowly passed the House May 4 but faces an uncertain future in the Senate.

The House bill would significantly reduce federal funding to states that expanded their Medicaid programs to low-income adults under the ACA. A vast majority (84%) of the public say it is important that states that received federal funds to expand Medicaid continue to receive those funds under any replacement plan.

This includes large majorities of Democrats (93%), independents (83%) and Republicans (71%).  Support for continued funding for the Medicaid expansion is also popular among people living in states that have not expanded their Medicaid program. 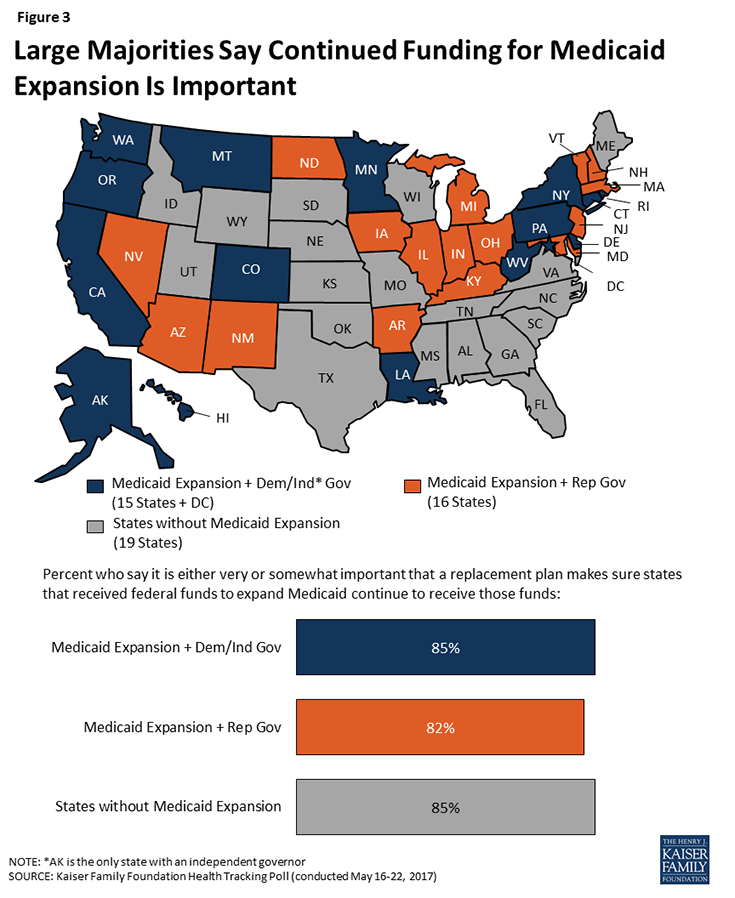 The poll also finds that the public prefers Medicaid’s current financing structure, with the federal government matching state spending on an open ended basis, to the proposed changes in the House bill, which would limit the federal government’s contributions through per capita caps or block grants while giving states more flexibility to decide who and what to cover under the program.

When asked about this proposed change, seven in 10 (71%) say Medicaid should largely continue as it is today, while fewer (26%) say it should be changed to limit federal funding while letting states decide who and what to cover. Democrats and independents largely favor the status quo (90% and 70%, respectively) while Republicans split, with similar shares supporting the status quo (47%) and the alternative (48%).

Overall six in 10 Americans (58%) say Medicaid is either “very” or “somewhat” important for them and their family, including a majority of Democrats (64%) and independents (57%), and nearly half (46%) of Republicans.