Health Care Remains a Top Issue for Democrats Heading into Next Debates; At This Stage, More Want to Hear About Candidates’ Difference than Contrasts with President Trump

The 2020 presidential election may be shaping up to be another election cycle focused on health care, with Democratic candidates offering competing proposals aimed at expanding coverage and controlling costs and a pending legal battle over the constitutionality of the Affordable Care Act.

The latest KFF tracking poll takes a closer look at the public’s views on a “public option” that would compete with private insurance. Consistent with other polling showing the public likes choice and competition, the new poll finds two-thirds (65%) of the public – including most Democrats (85%) and independents (68%) – say they support a public option. Most Republicans (62%) oppose a public option.

Similar to previous KFF polling on Medicare-for-all, the new poll finds that attitudes towards a public option can swing significantly, depending on what arguments people hear. 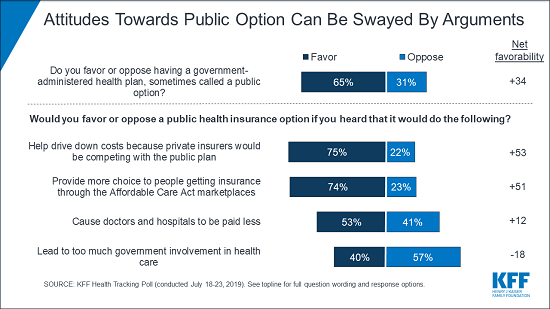 Support for Medicare-for-all Dips Slightly, Though Half of Public Remains Supportive

This month’s poll found a modest drop-off in support for a national Medicare-for-all plan that would cover all Americans. About half (51%) of the public say they support a national Medicare-for-all plan, down slightly from April (56%) and down 8 percentage points from its peak in March 2018 (59%). A majority of Democrats (72%) and independents (55%) still favor such a plan.

In addition, as in previous KFF polls, a larger share of Democrats and Democratic-leaning independents say that they would prefer building on the Affordable Care Act (ACA) to expand health coverage to more Americans (55%) than replacing the ACA with a national Medicare-for-all plan (39%).

The small dip in Medicare-for-all support may reflect recent debate over the role of private insurance, including employer-sponsored coverage, which would largely disappear under the leading Medicare-for-all plans but would continue under a public option.

Three-quarters (76%) of the public views employer-sponsored health coverage favorably. Among people covered through employer plans, the vast majority rate their coverage as either “excellent” (36%) or “good” (50%), while small shares say it is “not so good” (10%) or poor (4%). 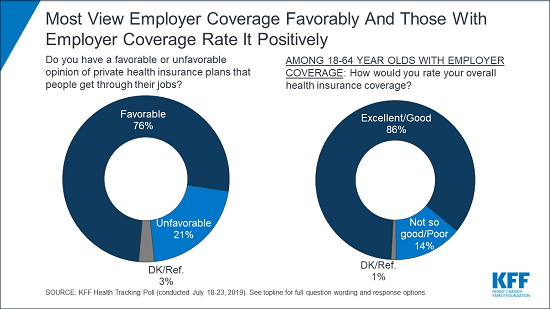 Medicare, the program – and the word used in Medicare-for-all – is also popular, with 83% of the public viewing it favorably. In addition, nearly everyone with Medicare rates their coverage as either excellent (48%) or good (47%).

A separate brief examines the role private insurers play in providing health coverage for Americans today in employer plans and the individual market, as well as in Medicare and Medicaid, and how that would likely change under Medicare-for-all and other proposals.

Ahead of the second round of debates for Democratic presidential candidates, the poll finds health care remains a top issue for Democrats and Democratic-leaning independents. Among this group, more than eight in 10 (83%) say it is “very important” that the candidates talk about health care. Other top issues include climate change (76%), issues affecting women (71%), and immigration (69%).

Among those who cite issues affecting women as important for the candidates to discuss, the largest share name abortion and reproductive health issues as their main concern (33% overall), while nearly as many cite equal pay issues (30%). Fewer cite equal treatment or equal rights (17%), women’s health care issues other than reproductive health (12%), other workplace issues (7%), or violence against women and sexual assault (7%).

If the Courts Overturn the ACA, Large Majorities across Parties Want to Retain Key Elements

A federal appeals court earlier this month heard arguments in a case backed by the Trump Administration and many Republican state attorneys general that seeks to overturn the entire Affordable Care Act. The poll finds most of the public wants to preserve key parts of the law that protect consumers, expand coverage and limit out-of-pocket costs.

Large majorities – including most Republicans – say it is “very important” to them that the provisions prohibiting insurers from denying coverage to people with pre-existing conditions coverage (72%) and charging sick people higher premiums than healthy people (64%) be kept in place.

Majorities – including about half of Republicans – also say it is “very important” to keep the ACA provisions prohibiting insurers from denying coverage to pregnant women (71%) or setting lifetime dollar limits on coverage (62%), as well as requiring insurers to cover the full cost of most preventive services (62%).

Designed and analyzed by public opinion researchers at KFF, the poll was conducted July 18-23, 2019 among a nationally representative random digit dial telephone sample of 1,196 adults. Interviews were conducted in English and Spanish by landline (296) and cell phone (900). The margin of sampling error is plus or minus 3 percentage points for the full sample. For results based on subgroups, the margin of sampling error may be higher.