A Majority of ACA Marketplace Enrollees Perceive the Marketplaces As “Collapsing,” But Most Say They Are Not Paying More for Coverage Compared to Last Year

Very Few Say They Would Want to Purchase a Short-Term Plan, A Regulation Being Drafted By The Trump Administration

Nine in 10 enrollees in the non-group market say they intend to continue buying their own insurance even after being told that Congress has repealed the individual mandate penalty for not having coverage as of 2019, according to a new survey by the Kaiser Family Foundation. The survey finds the mandate, part of the Affordable Care Act, ranks low among the reasons people give for buying their own insurance in 2018.

The survey also finds a lack of awareness about the status of the mandate penalty, with 1 in 5 non-group enrollees (19%) saying they are aware the penalty has been repealed but is still in effect for this year. The mandate continues to rank far down on a list of “major reasons” people give for buying their own insurance, below reasons such as protecting against high medical bills (75%), peace of mind (66%), or because they or a family member has an ongoing health condition (41%). 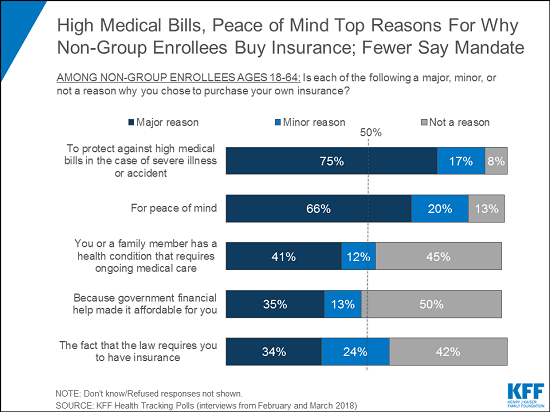 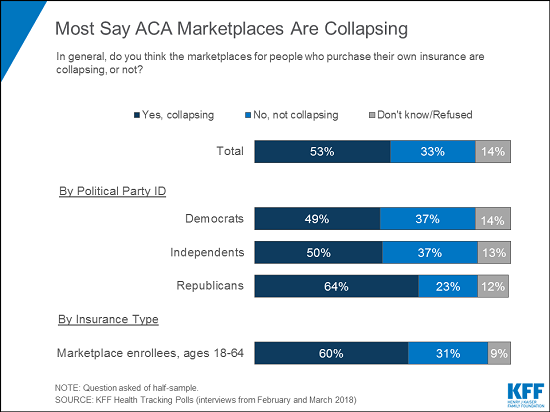 In addition, the poll finds at least half of non-group enrollees in general and marketplace enrollees specifically are worried about the future of health insurance availability and costs in their areas. Fifty-one percent of all non-group enrollees and 58 percent of marketplace enrollees say they are “very worried” or “somewhat worried” there will be no insurance companies left selling plans in their area in the future, and similar shares worry that their current insurance company will stop selling plans in their area (49% and 58%, respectively).

Despite Overall Pessimism About The Future of the ACA Marketplaces Generally, Most Say Their Premiums Have Not Increased and Are Satisfied with Available Options

In the marketplaces, this is likely attributable to the federal tax credits most enrollees receive to help cover premium costs and protect against steep increases. It also may reflect a “silver loading” strategy in which many states, concerned about the possibility of large premium hikes due to the loss of federal cost-sharing reduction payments, concentrated insurers’ premium increases on the silver benchmark plans that help determine the level of federal financial assistance available to enrollees. 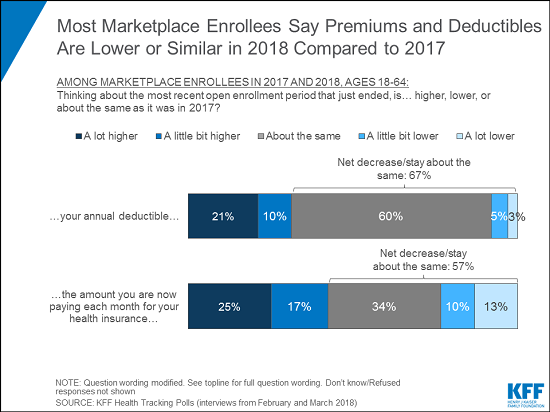 In addition, a majority of marketplace enrollees (61%) say they were satisfied with their insurance options for 2018 and most (68%) said they did not experience problems during the open enrollment period.

The survey also finds little appetite among current marketplace enrollees for the non-renewable short-term insurance plans that President Trump has recently sought to expand access to through an executive order and newly proposed regulations. Such plans tend to cost less than ACA plans but provide fewer benefits, and are exempt from ACA requirements that insurers accept all applicants and cover pre-existing conditions.

When asked whether they would want to purchase such a plan or keep the plan they have now, the vast majority of non-group enrollees (84%) say they would keep the plan they have now, while 12 percent would want to purchase a short-term plan. Responses were similar among individuals living in households both with and without pre-existing conditions. 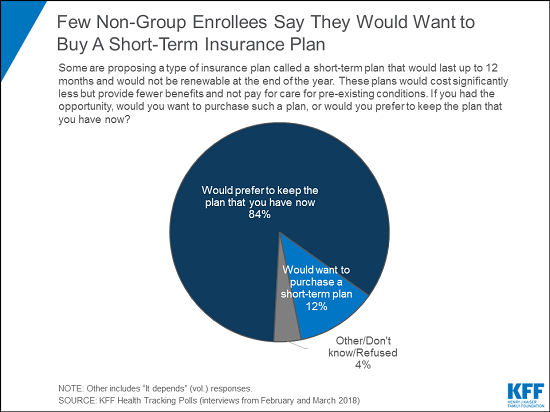