Most Republicans Trust President Trump to Do What’s Best on Health Care; Most Democrats and Independents Lack Trust in Either the President or the Federal Government

Majorities of Democrats, Independents and Republicans Would Support Allowing People Younger Than Age 65 to Buy into Medicare

Half (50%) of the public would say that if fewer people sign up for marketplace plans during this year’s open enrollment, it is mainly due to the Trump Administration, and most Americans (61%) see President Trump and Republicans as responsible for the Affordable Care Act’s future, the latest Kaiser Family Foundation poll finds.

While the public generally sees Republicans as responsible for the nation’s health care system now, there are significant partisan differences in these perceptions.

Looking toward the future, a majority of the public (61%) – including most Democrats (71%) and independents (58%), and half of Republicans (52%) – say that because President Trump and Republicans in Congress are now in control of the government, they are responsible for any problems with the health care law moving forward. Fewer (27%), including nearly four in 10 Republicans (36%), say that President Obama and Democrats in Congress are responsible because they enacted the law.

The public remains divided on its overall view of the Affordable Care Act, with similar shares holding favorable (50%) and unfavorable (46%) views. As in the past, these views largely fall along party lines. 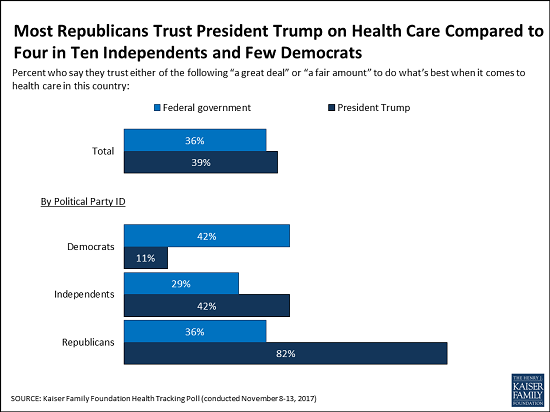 While attitudes towards the Affordable Care Act and trust in President Trump are largely shaped by party identification, opinions towards Medicare, the government health insurance program for adults 65 or older and for younger adults with long-term disabilities, are positive across partisan lines. Overall, a majority of the public (80%) – including most Democrats (85%), independents (83%), and Republicans (74%) hold favorable views towards Medicare.

Seven in 10 of the public favors both proposals with a slightly larger share of the public favoring the proposal which limited a Medicare buy-in option to those between the ages of 50 and 64 years old (77% compared to 72%). This includes majorities of Democrats, independent and Republicans (72% who favor the buy-in for people between the ages of 50-65, 62% favoring a broader buy-in). Arguments for and against a Medicare buy-in proposal changes some minds, though no single argument pushes support below a majority.