Poll: 7 in 10 Want the Trump Administration to Make the Affordable Care Act Work Rather Than Make it Fail

As the Trump administration begins implementing Thursday’s executive order aimed at providing alternatives to the Affordable Care Act’s marketplace plans, a new Kaiser Health Tracking Poll finds a large majority of the public (71%) want President Trump and his administration to do what they can to make the current law work.

Fielded just prior to Thursday’s executive order, the poll finds fewer Americans (21%) say that the president and his administration should do what they can to make the law fail so they can replace it later. 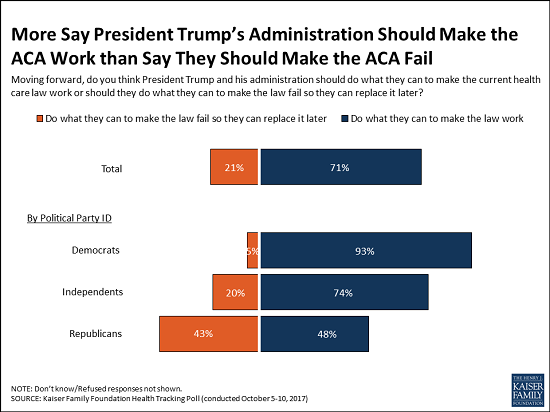 The poll also finds two thirds of the public (66%) say it is more important for President Trump and Congress to work on legislation to stabilize the Affordable Care Act’s marketplaces than continue efforts to repeal and replace it. That is more than twice the share (30%) who say it is more important for the administration and Congress to continue repeal and replace efforts than to stabilize the markets.

Late Thursday, the Trump administration announced it would end cost-sharing reduction payments to insurers intended to lower the deductibles and copayments that low-income marketplace enrollees face. The poll finds that a majority of the public (60%) favor Congress guaranteeing those payments to insurers while a third (33%) say they are a bailout of insurance companies and should be stopped.

Partisans view the cost-sharing subsidies very differently. While majorities of Democrats (82%) and independents (62%) want Congress to continue them, most Republicans (55%) say that the payments should stop.

However, these partisan differences fade when framed as part of a bipartisan deal to stabilize the ACA marketplaces similar to the one being negotiated by Senators Lamar Alexander and Patty Murray. When asked whether they support Congress guaranteeing the funds to continue the cost-sharing reduction payments as part of a bipartisan compromise that also would give states more flexibility in the types of plan sold in their state’s marketplace, a majority of the public (69%) – including roughly equal shares of Democrats (69%), independents (70%), and Republicans (68%) – say they support such a compromise. 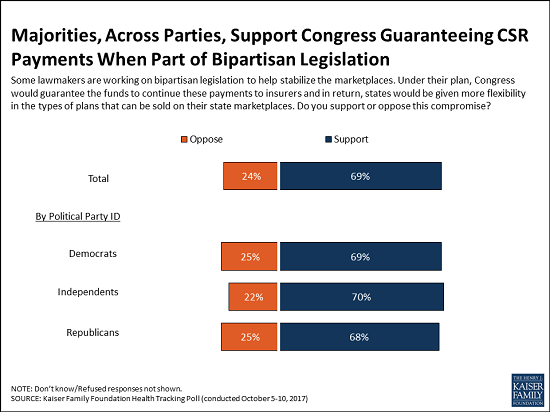 Not surprisingly, approval of the actions taken by President Trump’s administration are largely driven by party identification with the majority of Republicans expressing approval for each of the four actions while few Democrats approve of any of the actions.

Designed and analyzed by public opinion researchers at the Kaiser Family Foundation, the poll was conducted from October 5 – 10 among a nationally representative random digit dial telephone sample of 1,215 adults. Interviews were conducted in English and Spanish by landline (429) and cell phone (786). The margin of sampling error is plus or minus 3 percentage points for the full sample. For results based on subgroups, the margin of sampling error may be higher.