Broader Public Opinion on the Law Still Tilts Unfavorably, Though Gap Has Narrowed Since July and Returned to Pre-Rollout Levels

With the second annual open enrollment period under the Affordable Care Act set to begin Nov. 15, the latest Kaiser Family Foundation tracking poll finds major gaps in the awareness of the nation’s uninsured residents who are a primary target for enrollment and outreach efforts.

In addition, two-thirds of the uninsured say they know “only a little” or “nothing at all” about the marketplaces where people who don’t get coverage through their employers can shop for insurance and just over half (53 percent) of the uninsured are unaware of the financial assistance available to help low- and moderate-income individuals purchase insurance. 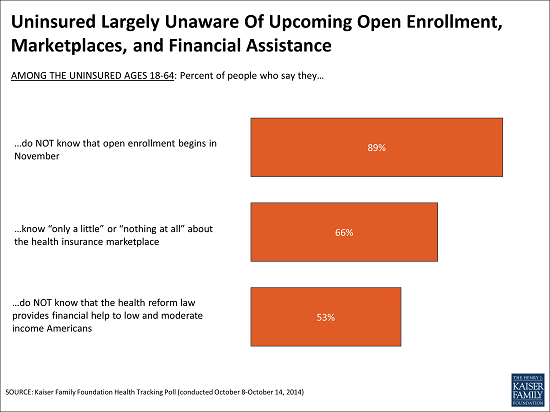 Most of those who expect to remain uninsured say it is because they think they will not be able to find an affordable plan (18% of the uninsured overall) or they don’t want to be forced to buy anything (12%, including 3% who say they would rather pay the fine than pay for coverage).

This month’s tracking poll also finds few changes in the public’s broader views of the ACA, with more people continuing to view it unfavorably (43%) than favorably (36%).  The gap, though, has shrunk since July, when unfavorable views rose to 53%, and public opinion now has returned to about the levels it was last year at this time as the first open enrollment period began. 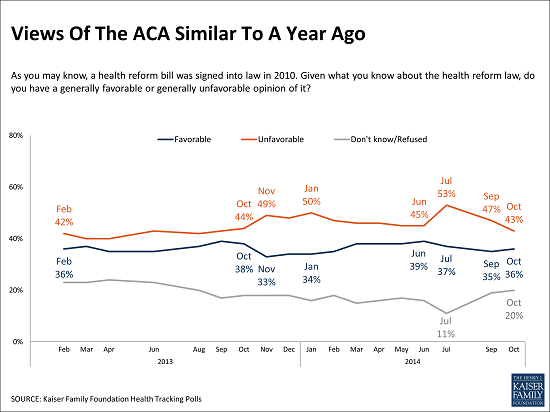 The latest tracking poll was designed and analyzed by public opinion researchers at the Kaiser Family Foundation and was conducted from October 8-14, 2014 among a nationally representative random digit dial telephone sample of 1,503 adults ages 18 and older. Interviews were conducted in English and Spanish by landline (751) and cell phone (752). The margin of sampling error is plus or minus 3 percentage points for the full sample and plus or minus 9 percentage points for the uninsured.  For results based on subgroups, the margin of sampling error may be higher.