Steep Drops in Problems Paying For and Getting Care among Recently Insured, But Affordability and Access Problems Remain

MENLO PARK, Calif. – About two thirds (68%) of previously uninsured Californians have health coverage after the Affordable Care Act’s second open enrollment period, and this group is now much more likely to report their health needs are being met and much less likely to say they have problems paying for it than they did before when they were uninsured, finds the latest Kaiser Family Foundation’s Longitudinal Panel Survey following the experiences of a randomly selected group of Californians who were uninsured prior to the ACA’s implementation. By contrast, there were no changes in access or ability to pay for those who remained uninsured.

The third to date in the series conducted since 2013, the new survey provides a detailed look at how the ACA has affected the lives of previously uninsured residents in California, a state that embraced the law’s opportunities for coverage expansions by establishing the Covered California insurance marketplace and expanding its Medi-Cal program.

“We have been following the uninsured in California through this survey since ACA implementation began, and now we are seeing striking gains in financial security and access for people who got coverage,” KFF President and CEO Drew Altman said. “Like health insurance generally, their coverage is not a cure-all and they still face problems paying for and getting care, but they are far better off than they were before.”

The survey finds most of California’s previously uninsured enrolled in Medi-Cal (34% of all uninsured adults in 2013), with employer coverage (14%) and Covered California (12%) covering most of the others.

Recently insured residents now report very different experiences than they did in 2013 when they were uninsured, although many still report problems paying for and accessing care:

• The share of recently insured saying it is difficult to afford health care fell sharply from 86 percent in 2013 to 49 percent now.

• When asked how well their health needs are being met, 86 percent of the recently insured now say that they are being somewhat or very well met – up from about half (51%) in 2013. 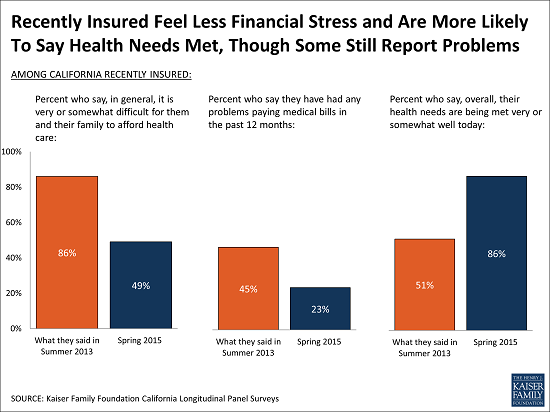 Gaining coverage also results in a reordering of people’s family pocketbook concerns. Those who remain uninsured rank health care costs as their top financial challenge – with 85 percent saying health care is “very” or “somewhat” difficult to afford, more than say the same about housing (66%), gas (57%), or utilities (51%). Among the recently insured, half (49%) say affording health costs is difficult, ranking it fourth behind paying for housing (58%), utilities (54%), and gas (53%). 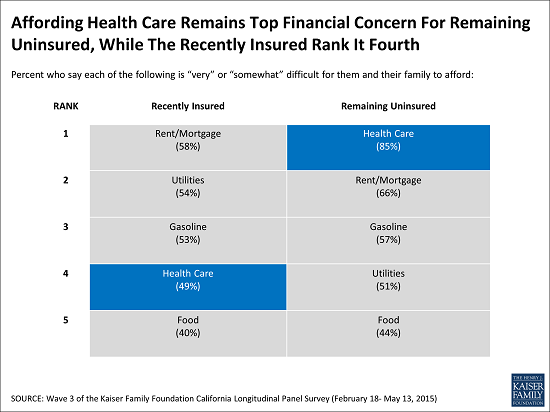 Large majorities of those who report having insurance after the second open enrollment period say their experiences with their current health plans have been positive, including 83 percent of Medi-Cal enrollees and 63 percent of Covered California enrollees. The recently insured are also largely satisfied with their plan’s choice of primary care doctors (79%), hospitals (75%), and specialists (67%).

However, challenges exist in using their coverage, with about 3 in 10 (28%) saying that in the past 12 months they had to wait longer than they thought reasonable for an appointment. Also, 16 percent of the recently insured say a doctor’s office told them in the past 12 months that they would not accept them as a new patient. The share is higher for those enrolled through Medi-Cal (17%) or Covered California (23%) than for those with employer coverage (6%). The survey is not able to determine the extent to which these issues occurred before these recently insured residents obtained their coverage.

The new survey finds a similar success rate in covering different groups in California, with the share of previously uninsured who now have coverage similar among whites (79%) and Hispanics eligible for coverage (74%).

“Our latest survey shows that previously uninsured Hispanics who are eligible to enroll through Medi-Cal or Covered California are signing up at roughly the same rate as whites,” says KFF Senior Vice President Mollyann Brodie, who leads the Foundation’s public opinion and survey research. “Two years in, the group that remains uninsured includes many undocumented immigrants and long-term uninsured residents.” 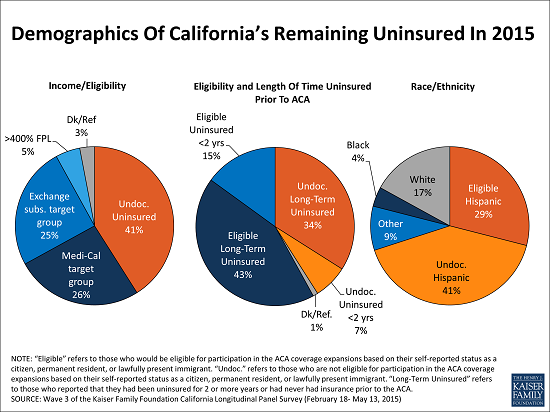 The survey is the third in the series based on the Kaiser Family Foundation California Longitudinal Panel Survey Project. It was designed and analyzed by researchers at the Foundation. The third wave of the survey was conducted primarily by telephone from February 18 – May 13, 2015 among 1,105 individuals who had participated in the baseline survey. The baseline survey was conducted from July 11-August 29, 2013 with a representative sample of 2,001 adults ages 19 to 64 living in California who reported having been without health insurance for at least two months at the time of the survey. Interviews were carried out in English and Spanish by SSRS, an independent research company. The panel survey estimates the percentage of the previously uninsured who gained coverage and does not estimate the overall change in the number of uninsured Californians because it does not include anyone who may have been insured prior to open enrollment but is now uninsured. The margin of sampling error is plus or minus 4 percentage points for results based on the full sample, 5 percentage points for recently insured Californians, and 8 percentage points for those Californians who remain uninsured. For other subgroups, the margin of sampling error may be higher. Fieldwork for the panel survey is supported by a grant from The California Endowment.