Intensity Gap: Democrats are Twice as Enthusiastic about the ACA than Republicans are About Its Replacement

As the U.S. Senate continues to debate their plan to repeal and replace the 2010 Affordable Care Act, the latest Kaiser Family Foundation tracking poll finds the public souring on the effort with a growing majority opposed to the plan.

This month’s poll finds 61 percent of the public now hold an unfavorable view of the Congress’ plan, up slightly from 55 percent in June. The opposition is also growing more intense, with 44 percent of the public now viewing the plan “very” unfavorably, up from 38 percent in June.  In contrast, relatively few view the plan favorably (28%), including just one in 10 (9%) who view it “very” favorably. 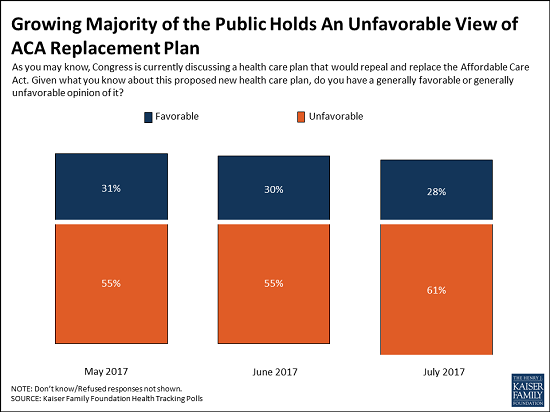 While majorities of Democrats (86%) and independents (63%) view the repeal and replace plan unfavorably, most Republicans (60%) and supporters of President Trump (54%) continue to view it favorably. The intensity of Republican support is modest:  One quarter of Republicans (25%) view the plan “very” favorably.

In contrast, this month half (50%) of the public hold a favorable view of the Affordable Care Act itself, while somewhat fewer (44%) hold an unfavorable view.  These shares have largely been stable the past few months, meaning the 2010 law continues to be more popular than Congress’ plan to replace it.

The poll also finds that Democrats are far more enthusiastic about the current law than Republicans are about its replacement.  Half (52%) of Democrats now view the Affordable Care Act “very” favorably, twice the share of Republicans who say the same about the replacement plan. 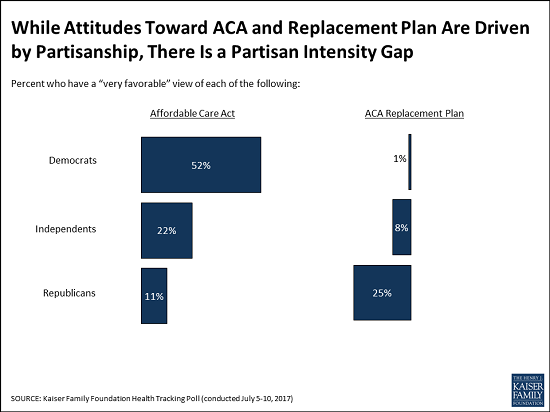 Two- thirds of the public (65%) oppose major reductions to Medicaid as part of a plan to repeal and replace the Affordable Care Act, while three in ten (28%) support such reductions. A large majority of Democrats (88%) and most independents (63%) oppose major Medicaid cuts, while a narrow majority of Republicans (54%) and President Trump’s supporters (51%) favor them.

Arguments commonly made for and against reductions in Medicaid funding change opinions only modestly. For example, about one-fourth of those opposed to major Medicaid cuts (17% of the public overall) change their minds after hearing that this would give states more flexibility and control over their Medicaid programs.  A similar share of those who support funding reductions (28%, and 8% of the public overall) change their mind after hearing that it would make it harder for states to address the nation’s prescription painkiller epidemic.

Another potential challenge for the bill’s supporters are the Congressional Budget Office’s estimates about the potential impact of repeal-and-replace plans on the uninsured and people’s health care costs expected to be released next week.

While only a third of the public has heard or read anything about the CBO’s recent initial report on the Senate bill, at least half of the public say that hearing certain statistics about the impact of the Senate legislation from the C.B.O. may make them “less likely” to support the plan. For example, six in ten say that that hearing it would increase premiums for people who purchase their own insurance on the marketplace would make them “less likely” to support it.

The poll also finds a large majority of the public (71%) would rather see Congressional Republicans work with Democrats to make improvements to the Affordable Care Act but not repeal the law, compared to one-fourth (23%) who say they would want Republicans to continue working on their own plan to repeal and replace the law.

The poll finds relatively scant support for another strategy floated by President Trump and some Congressional Republicans to repeal parts of the Affordable Care Act now and work out details of a replacement plan later if Congress is unable to agree on a full replacement plan.

About one-fourth of the public (26%) say Congress should vote to repeal the parts of the law they can immediately and try to work out the replacement plan later, fewer than say they want Congress to wait to vote on repeal until they work out a replacement plan (37%) or that Congress shouldn’t repeal the Affordable Care Act at all (33%). Once again, there is a large partisan divide on this question, with about half of Republicans (52%) and President Trump’s supporters (45%) favoring immediate repeal.

Designed and analyzed by public opinion researchers at the Kaiser Family Foundation, the poll was conducted from July 5 – 10 among a nationally representative random digit dial telephone sample of 1,187 adults. Interviews were conducted in English and Spanish by landline (407) and cell phone (776). The margin of sampling error is plus or minus 3 percentage points for the full sample. For results based on subgroups, the margin of sampling error may be higher.