A new Kaiser Family Foundation analysis of key insurer financial indicators suggests that the individual insurance market showed signs of stabilizing in 2016, although profitability remained below the level of performance prior to the opening of the Affordable Care Act’s insurance marketplaces.

The new analysis tracks insurer financial performance in the individual market through two key indicators: average medical loss ratios (the share of health premiums paid out as claims) and average gross margins per member per month (the average amount by which premium income exceeds claims costs per enrollee in a given month).

Although insurers generally have remained profitable overall since the implementation of the ACA, these measures indicate that individual market insurer financial performance worsened in 2014 and 2015, with the transition to the marketplaces and adjustment to other changes under the health law. It is unlikely insurers can be profitable when medical loss ratios exceed 85-90 percent; in 2015, the average individual market medical loss ratio grew to 103 percent. Average gross margins per member per month fell from $37.20 in 2013 to $6.54 in 2014, and dropped further to -$10.17 in 2015. 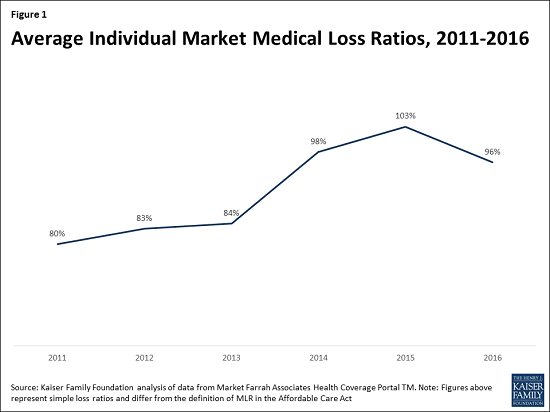 Insurers began to see improvement in 2016, the analysis finds, as they were able to access more meaningful data to set premium rates in the third year of ACA marketplaces. In the individual market that year, the average medical loss ratio was 96 percent, and the average gross margins per member per month was $13.54.

For insurers in the individual market to return to pre-ACA margins, financial performance would need to continue improving. With large premium increases and relatively steady enrollment in 2017 ACA marketplace plans, insurers may see substantial movement in that direction this year if claims costs do not rise dramatically, according to the analysis.

Insurer Financial Performance in the Early Years of the Affordable Care Act is available on kff.org.