Public Remains Split on Repeal but a Small Share, Including 31% of Republicans, Favor Repeal Without Replace 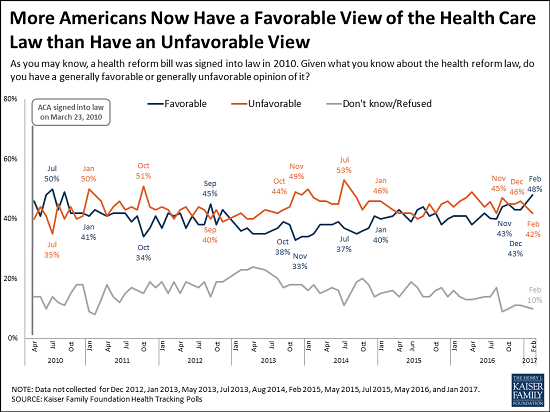 In spite of these more favorable views, the public remains divided along partisan lines on whether Congress should (47%) or should not (48%) repeal the law. At the same time, more of those who favor repeal want lawmakers to wait until the details of a replacement plan are known (28% overall) than want Congress to repeal immediately and work out the replacement’s details later (18% overall). 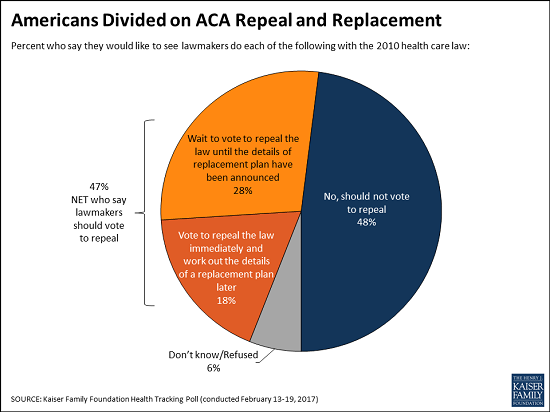 Underscoring that perceptions sometimes exceed the impact of what policies may or may not do, nearly half (48%) of the public says they worry that they or someone in their family will lose their health insurance if the law is repealed and replaced.

When asked about health care generally, twice as many Americans say it has gotten off on the wrong track (62%) as say it is headed in the right direction (30%). This view prevails among Democrats, Republicans and independents alike – a rare instance of partisan agreement on health care. The share of those who say health care in this country has gotten off on the wrong track is similar to other national estimates of the direction of the country more generally.

Medicaid is also one of the primary ways the Affordable Care Act expanded coverage to millions more low-income, uninsured adults. The vast majority (84%) say it is either “very” or “somewhat” important for any replacement plan to ensure that states that received federal funds to expand Medicaid continue to receive those funds. This includes majorities of Democrats (95%) independents (84%) and Republicans (69%).

The vast majority (87%) of residents in the 16 states that expanded their Medicaid programs that now have Republican governors say it is important to continue to receive those funds – similar to the share in expansion states with Democratic or independent governors (85%) and more than in states that chose not to expand their Medicaid programs (80%). 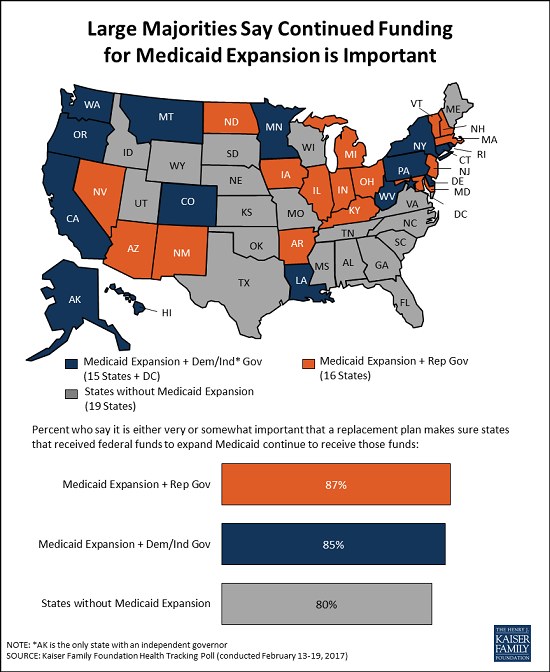 As part of some plans to repeal and replace the 2010 health care law, Congressional leaders are also considering structural changes to Medicaid, which provides coverage for medical care and long-term care services to low-income people. The federal government today matches state spending on an open-ended basis but Republican lawmakers are weighing limiting federal funds through per-capita caps or block grants.

When asked to choose, two-thirds (66%) of the public prefers the status quo compared to about one third (31%) who favor the per-capita cap approach, which would limit federal funding on a per-person basis while giving states more flexibility over who and what services to cover. Similarly, more favor the status quo (63%) over a shift to Medicaid block grants (32%) that would limit federal funding while giving states greater control over who and what to cover under Medicaid.

Such concerns about reduced Medicaid funding likely reflect the public’s personal experiences with the program with nearly six in 10 (56%) reporting some connection with the Medicaid program, either because they personally have received some assistance from Medicaid (26%) or they have close friends or family who have (31%).

Nearly six in 10 overall (56%) say Medicaid is important to them and their family, though this varies by party identification.  Democrats (62%) and independents (57%) are more likely to consider Medicaid important than are Republicans (43%).

Who does the public trust for information about the nation’s health care system?

With President Trump and top White House officials regularly criticizing the accuracy of news from major news organizations, this month’s poll also looks at which sources of information Americans trust most about changes to the nation’s health care system.

The survey finds Americans are more likely to say they trust their Congressional representatives (55%) their friends and family (51%), and local (53%) and national news organizations (51%) than President Trump (42%) or social networking sites such as Facebook and Twitter (16%).

Designed and analyzed by public opinion researchers at the Kaiser Family Foundation, the poll was conducted from February 13-19 among a nationally representative random digit dial telephone sample of 1,160 adults. Interviews were conducted in English and Spanish by landline (389) and cell phone (771). The margin of sampling error is plus or minus 3 percentage points for the full sample. For results based on subgroups, the margin of sampling error may be higher.