Americans’ Views on the Affordable Care Act Hold Steady, with 43% Now Viewing It Favorably and 42% Unfavorably

Few Report Seeing Comparative Information about Health Care Prices and Quality, and Less Than 10% Use It

Pocketbook and Consumer Issues Top Public’s List of Priorities for the President and Congress, Ahead of Several ACA-Related Issues

This month’s Kaiser Health Tracking Poll finds public opinion on the health care law holding steady and closely divided. The share expressing a favorable view (43%) exceeds the share with an unfavorable view (42%) for the first time since November 2012, albeit by one percentage point, but the difference is within the survey’s margin of sampling error and is not statistically significant.

As in the past, this poll finds sharp partisan divisions, with most Democrats viewing the law favorably (70%), most Republicans viewing it unfavorably (75%), and independents in between (42% favorable, 46% unfavorable). 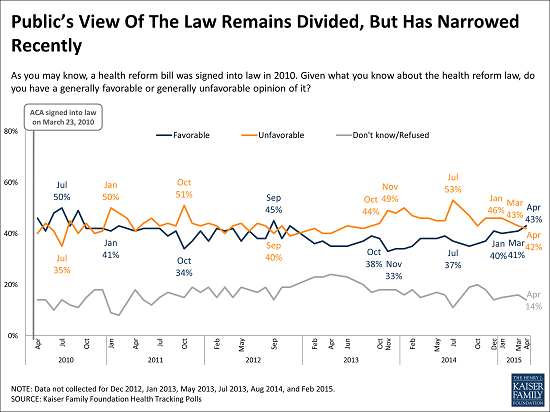 The poll also finds that, more than a year after the law’s major coverage provisions took effect, most Americans (56%) say it has had no direct impact on their families, with similar shares saying the law has helped (19%) or hurt (22%) them. These results are similar to last month but reflect a narrower gap than recorded in earlier polling.

This month’s poll asked about the availability and use of price and quality information when choosing health care providers.

Only a small share of the public say they have seen quality information about health insurance plans (15%), hospitals (13%) or doctors (10%) in the past 12 months — and even fewer report using that information (6% for plans, 4% for hospitals and 6% for doctors). Similarly, relatively few people report seeing and using price comparisons involving plans (18% saw, 9% used), hospitals (6% saw, 2% used) and doctors (6% saw, 3% used).

Five years after the ACA’s enactment, this month’s poll also probes the public’s health care priorities for the President and Congress going forward. Price and consumer issues topped the list ahead of several questions related to the ACA.

The public’s top health care priority overall (and across party lines) is making sure that high-cost drugs for chronic conditions, such as HIV, hepatitis, mental illness and cancer, are affordable to those who need them.  Three-quarters of the public (76%) say this is a “top priority,” including strong majorities of Democrats (87%), Republicans (66%) and independents (72%).

Majorities also identify a number of other price and consumer-related “top priorities” for the President and Congress ahead of several questions related to the ACA.  These top priorities include provider network protections and increased transparency related to the prices and quality of health care. Actions related to the ACA that Democrats or Republicans might favor such as expanding financial assistance to help people buy insurance or eliminating ACA mandates rank further down the public’s priority list.

There are, however, partisan differences in priorities, particularly around the ACA. Two items that build on the ACA rank as the second and third priorities for Democrats – requiring all states to expand their Medicaid programs (74%) and changing eligibility rules so more people are able to get financial help to purchase health insurance (72%). In contrast, the second and third ranked priorities for Republicans would reverse all or part of the ACA by repealing the entire law (60%) and repealing the individual mandate (52%). For independents, changes like provider network protections and price transparency rank second and third. 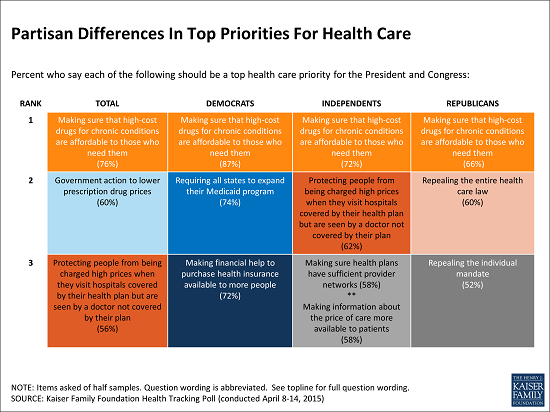 When asked directly about what Congress should do about the ACA, the public remains divided, largely driven by partisan divisions. Just under half want Congress to either expand what the law does (24%) or continue implementing it as is (22%), while about four in 10 want to see Congress either scale back the law (12%) or repeal it entirely (29%). These shares have remained relatively constant for nearly six months.

The latest tracking poll was designed and analyzed by public opinion researchers at the Kaiser Family Foundation and was conducted from April 8-14 among a nationally representative random digit dial telephone sample of 1,506 adults. Interviews were conducted in English and Spanish by landline (601) and cell phone (905). The margin of sampling error is plus or minus 3 percentage points for the full sample. For results based on other subgroups, the margin of sampling error may be higher.