This was published as a Wall Street Journal Think Tank column on June 2, 2015. 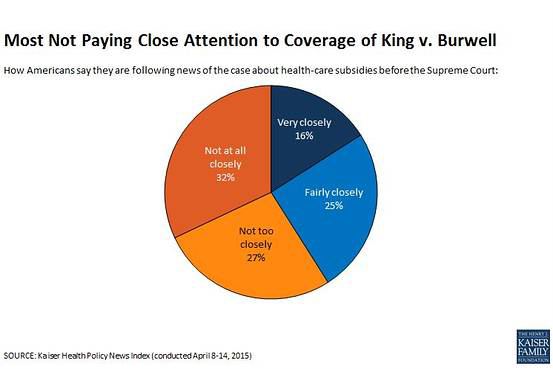 The Supreme Court’s King v. Burwell ruling will make headlines whenever it arrives. It will also be genuine news to much of the country. The Kaiser Family Foundation’s Health Policy News Index, which tracks how closely the public follows health stories in the news, found that 59% of Americans have not been paying much or any attention to news stories about the case, and only 16% have been following very closely. That means that when the verdict comes the media’s first job will be to explain what the case was about.

A verdict for the government would allow implementation of the Affordable Care Act to continue largely uninterrupted and calm the ACA waters politically. A decision for the plaintiffs would upend the ACA and be a bigger and longer-lasting story. Which of the 34 affected states plan to set up their own exchanges, allowing subsidies to continue to their residents? Can Republicans in Congress agree on legislation that gives states time to consider their options while also changing the law in ways that Republicans want? Will the president reject their changes and veto such legislation? What would be the impact of cutting off subsidies to the approximately 7.5 million people who receive them? In the midst of this broad and fast-moving story, news organizations (including our own Kaiser Health News) will have to make judgment calls.

Radically different claims will be made by Democrats and Republicans about the potential impact of legislation on consumers and the viability of insurance marketplaces. How far will news organizations go to ferret out the facts, and what can journalists do to master the intricacies of insurance concepts such as risk pooling and “death spirals”? That challenge will be especially tough because not every expert will agree on how much premiums will rise or how badly markets will deteriorate if some of the changes Republicans have been discussing are implemented, such as eliminating the employer and individual mandates. There should, however, be general agreement among impartial experts about the direction and rough magnitude of the effects.

The degree to which the news media have established the facts will help to umpire the blame game if Republicans in Congress condition an extension of subsidies in affected states on major changes to the law and the president vetoes such legislation and millions of Americans lose coverage. Much of the response to the ruling–like so much else about the Affordable Care Act–will follow partisan perspectives, with Republicans blaming the president and Democrats pointing fingers at congressional Republicans. News coverage could shape opinion in this instance because so many Americans have not been paying attention to the case.

Of course, the press must report what political leaders say even if some claims are spin. But with legislation and a potential presidential veto pending, it will be important to go beyond spin and report the facts to the degree that they can be determined.