In a close vote, the National Association of Insurance Commissioners (NAIC) recently adopted a resolution urging Congress and the Department of Health and Human Services (HHS) to exempt insurance broker and agent compensation from medical loss ratio (MLR) requirements or otherwise adjust the requirements to ease their effect. HHS last week released its final MLR rule, maintaining its original decision to count broker compensation as an administrative cost for insurers. H.R. 1206, a bill that would exempt broker commissions from the MLR calculation, is currently pending in the House.

The MLR provision of health reform requires insurers to use at least 80% of premium dollars (85% for large employer plans) on health care expenses and quality improvement (rather than overhead and profits). If an insurer doesn’t meet the requirements, it will have to pay rebates to consumers. Rebates based on 2011 experience will have to be paid by August 2012.

Brokers and agents – often referred to as insurance “producers” – not surprisingly are concerned that the MLR requirement will put pressure on insurers to cut back on administrative expenses, including sales commissions. Exempting broker commissions from the MLR calculation would mean that insurers could more easily meet the MLR thresholds without making changes to broker compensation. But that would also likely lead to higher premiums and smaller rebates for consumers.

To put all this into perspective, we analyzed 2010 insurer filings to NAIC (compiled by Mark Farrah Associates). On average, broker compensation accounted for 6% of insurance premiums in the individual market and 5% of premiums in the small group market. On a per person basis, this works out to an average of about $12 per month going to commissions in the individual market and $15 in the small group market. (Note that these amounts are averages. Not all insurance is sold through brokers, and commissions are generally higher for an initial sale than for a renewal.) 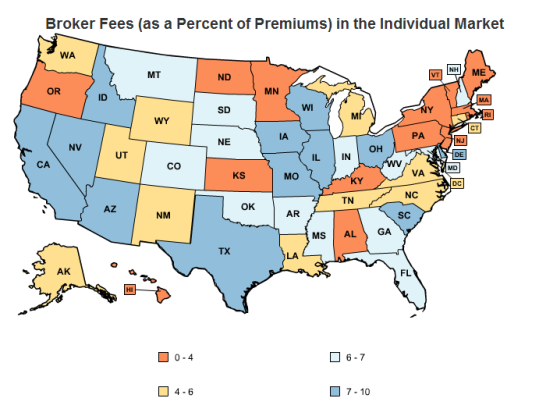 The state-by-state variation may be due to a variety of factors, including: How competitive the insurance market is, how insurance is sold in different states, how often individuals and consumers change insurance carriers, and the level of commissions paid by insurers. In some states, insurers rely more heavily on direct sales than commissions. Direct sales are also counted as administrative expenses under the MLR rule, but on average account for a much lower share of premium revenue than commissions (about 1% on average in both the small group and individual markets).

How much pressure the MLR requirement will put on broker commissions – or, how much exempting them would affect rebates to consumers – will vary from state to state, but also from insurer to insurer. Some plans appear to already be meeting the MLR thresholds, so exempting commissions in those cases would have little effect. But for the market overall, removing sales commissions from the equation would lead to smaller rebates for consumers and higher premiums over time.