Medicaid Enrollment Under the Affordable Care Act: Understanding the Numbers

As increasing data become available on the number of people enrolled in coverage under the Affordable Care Act (ACA), there has been interest in the number that have gained coverage through Medicaid and the role of the ACA in these Medicaid coverage gains. The ACA is anticipated to lead to significant gains in Medicaid enrollment as a result of two key changes:

According to the Congressional Budget Office, by 2016, the ACA is expected to reduce the number of uninsured by 25 million, with a 12 million increase in Medicaid enrollment.2 Overall, an estimated 29% of the current 47.6 million uninsured are eligible for Medicaid in their state.3

How many People have applied for Medicaid since open enrollment began for the new health insurance marketplaces?

How many people have enrolled in Medicaid since open enrollment began for the new Health Insurance Marketplaces?

What is the role of the ACA in recent Medicaid coverage gains?

The ACA is expected to increase coverage among adults made newly eligible by the Medicaid expansion as well as among already eligible individuals who were not yet enrolled. In states implementing the Medicaid expansion, millions of low-income adults became newly eligible for the program as of January 2014. Moreover, in all states, more people who were already eligible for the program, including children, are enrolling as they are connected to coverage through broad outreach efforts and the new simplified enrollment processes that all states must implement. Past experience with the implementation of the Children’s Health Insurance Program (CHIP) similarly shows that increases in both CHIP and Medicaid enrollment helped significantly reduce the number of uninsured children through the combined effects of eligibility expansions, simplified enrollment processes, and broad outreach and enrollment efforts.9

The new Medicaid enrollment data do not provide for a separate breakout of the number of enrollees who were made newly eligible by the Medicaid expansion, and it is difficult to quantify the impact of outreach and the new streamlined enrollment processes on enrollment. Moreover, because states are in varied stages of readiness to report the eligibility and enrollment data, there are gaps and limitations in the data that constrain analysis of the early data.10 However, broad comparisons to previous Medicaid enrollment trends suggest that the ACA is having a positive impact on Medicaid enrollment.

Enrollment trends prior to open enrollment show Medicaid enrollment growth peaking during the recession and then slowing as the economy started to recover. Medicaid enrollment is driven by both changes in economic conditions and policy changes. During the recent economic downturn, as unemployment rates climbed and incomes fell, more people became eligible and enrolled in Medicaid. This increased demand, combined with the maintenance of effort (MOE) provisions that helped preserve coverage (which were first enacted as part of the American Recovery and Reinvestment Act and then maintained under the ACA) led to substantial net annual growth. At the height of the economic downturn, monthly Medicaid and CHIP enrollment grew by 3.6 million between June 2008 to 2009 and June 2009 to 2010.11 Since then, economic conditions have continued to slowly improve, resulting in slower enrollment growth, far below recessionary peaks, at 1.4 million between June 2011 and 2012 and 1.0 million between June 2012 and 2013 (Figure 1).12  These changes reflect a net change in individuals coming on and leaving the Medicaid program. 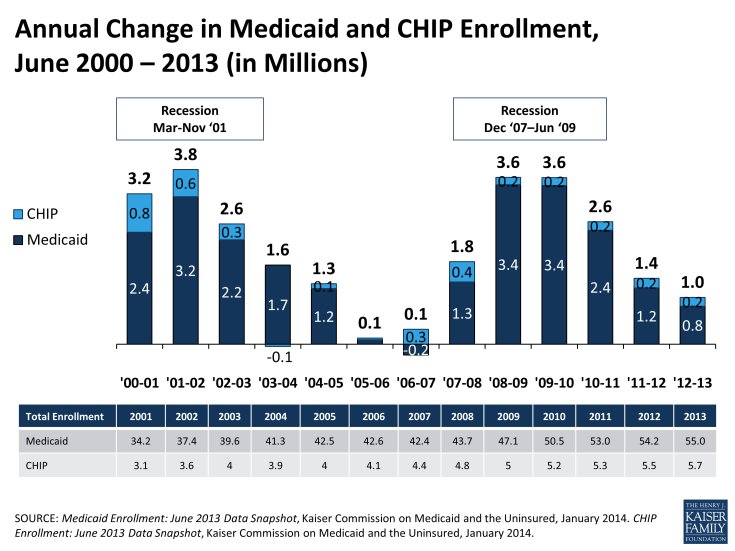 Looking ahead, future CMS data releases are anticipated to show continued Medicaid coverage gains through the end of the open enrollment period for the Marketplaces and beyond. Enrollment in Medicaid is not limited to open enrollment periods, so individuals may continue to enroll over the course of the year. CMS plans to enhance and expand the data it reports on Medicaid eligibility determinations and enrollment. As the data improve, it will allow for greater analysis both within and across states and of changes over time. The early data show a jump in Medicaid and CHIP determinations since open enrollment began relative to recent enrollment trends; however, it is not possible to disaggregate how much of this growth is directly attributable to the ACA. Future CMS data will show how many individuals are newly eligible for coverage as states start to submit claims to access the enhanced federal matching dollars tied to this coverage. However, it will be very difficult to disentangle how much of the overall increased enrollment can be tied to the ACA requirements to streamline Medicaid eligibility and enrollment policies and coordination across health coverage programs that must be implemented in all states regardless of whether they implement the Medicaid expansion.