Polling Data Note: Beyond the ACA, the Affordability of Insurance Has Been Deteriorating Since 2015

The debate about the future of the Affordable Care Act and its individual insurance marketplaces may be taking the focus off the affordability challenges facing the broader population, most of whom get their health coverage through employers, Medicare or Medicaid. 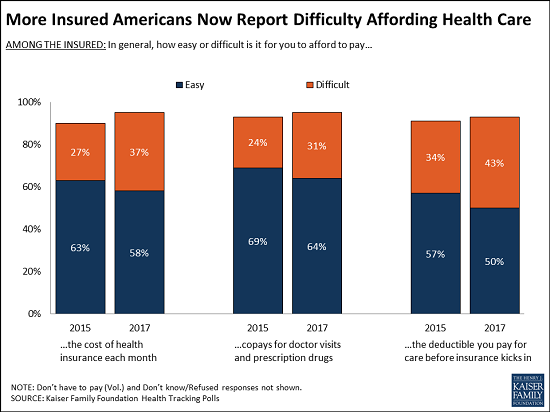 The data note draws on previously unreported data from Kaiser Health Tracking Polls conducted in December and February. Designed and analyzed by public opinion researchers at the Kaiser Family Foundation, the polls were conducted from December 13-19, 2016 and February 13-19, 2017 among nationally representative random digit dial telephone samples of 1,204 and 1,160 adults, respectively. Interviews were conducted in English and Spanish by landline and cell phone. The margin of sampling error is plus or minus 3 percentage points for the full samples. For results based on subgroups, the margin of sampling error may be higher.