A new Kaiser Family Foundation analysis finds about one in four people (24%) covered by large employer plans spent more than $1,000 out-of-pocket on health care in 2015, an increase of seven percentage points from 17 percent in 2005.

About 1 in 10 people in such plans (12%) paid more than $2,000 out-of-pocket in 2015, a distribution that mirrors the distribution of overall health spending, according to the new analysis of claims data. Dollar amounts in the analysis are inflation-adjusted to 2015 dollars. 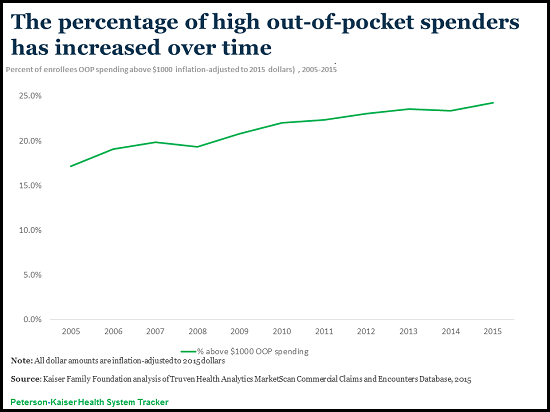 In addition to overall trends, the analysis also examines gender and age of high spenders, as well as differences in out-of-pocket health expenditures across diseases. It finds:

Additionally, an updated version of another analysis tracks a continuing trend of rising out-of-pocket costs outpacing costs paid by insurers for workers covered by their employer’s health plans.

The chart collection, related brief, and updated analysis are available on the Peterson-Kaiser Health System Tracker.