When it comes to family budget concerns, unexpected medical bills top Americans’ list of worries, with two-thirds (65%) of the public saying they are at least somewhat worried, including 35% who say they are “very” worried, the latest KFF Health Tracking Poll finds. 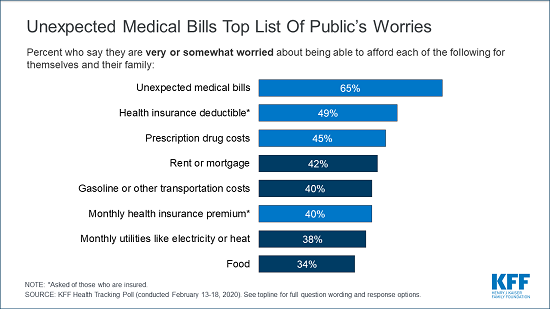 Unexpected bills do not only mean surprise bills for out-of-network care to consumers. One third of insured adults ages 18-64 (33%) say their family has received an unexpected medical bill in the past two years, including one in six (16%) who say it was because the provider was out of network.

Congress continues to weigh whether and how to protect insured patients from “surprise” medical bills, a term that often refers to unexpected bills when a patient unknowingly receives care from an out-of-network provider.

Designed and analyzed by public opinion researchers at KFF, the poll was conducted February 13-18, among a nationally representative random digit dial telephone sample of 1,207 adults. Interviews were conducted in English and Spanish by landline (302) and cell phone (905). The margin of sampling error is plus or minus 3 percentage points for the full sample. For results based on subgroups, the margin of sampling error may be higher.