With a new Congressional session beginning, policymakers preparing for budget discussions, and the ongoing Ebola crisis bringing attention to international health issues, it is an important time to understand Americans’ views on global health and the role of the U.S. government in addressing global health issues. The Kaiser Family Foundation has tracked public opinion on global health in-depth since 2009.

This new survey shows the public, including a plurality of Republicans, Democrats and independents, wants funding for global health maintained. Americans’ top priorities for global health funding focus on meeting basic human needs such as improving access to clean water and food, and helping children; some other high profile issues fall further down the list including malaria, polio, chronic illness and reproductive health. A large majority of the public overestimates the share of the U.S. federal budget spent on foreign aid and most say the country spends too much on it, but the public is more supportive of spending specifically aimed at improving health in developing countries. Another top priority is the fight against Ebola in West Africa, a news story that has ranked among the most closely watched developments of 2014. The number of new Ebola cases has declined recently, and 4 in 10 now believe the outbreak in West Africa is under control, up from just 10 percent in October when Ebola was spreading quickly.

Views Of U.S. Spending On Foreign Aid And Global Health

Most Continue to Overestimate U.S. Spending On Foreign Aid, But Views Change After Hearing The Actual Amount Spent 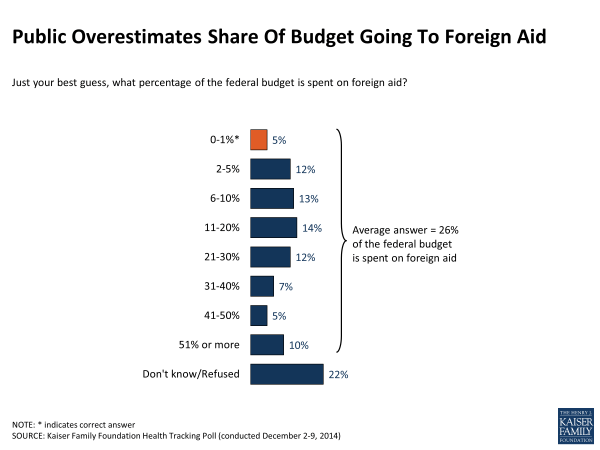 A majority of the public says the U.S. is spending too much on foreign aid, while just about 1 in 10 say too little and a quarter say about the right amount. However, after hearing the factual statement that foreign aid makes up about 1 percent of the federal budget the share saying “too much” drops in half from 56 percent to 28 percent and the share saying “too little” rises from 11 percent to 26 percent. 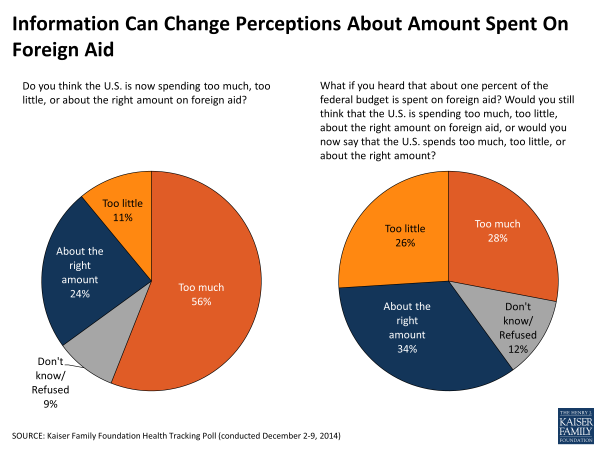 More Support For Global Health Spending Than For Foreign Aid

When asked about U.S. spending on global health, the public is more supportive than when asked about spending on foreign aid more generally. About 6 in 10 say the U.S. is now spending too little (27 percent) or about the right amount (36 percent) on efforts to improve health for people in developing countries, and a quarter say the U.S. is spending too much (26 percent).  Over time, opinions on U.S. spending on improving health in developing countries have remained fairly stable. 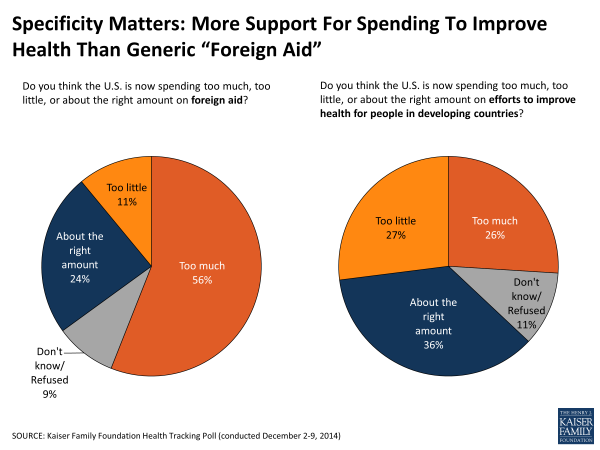 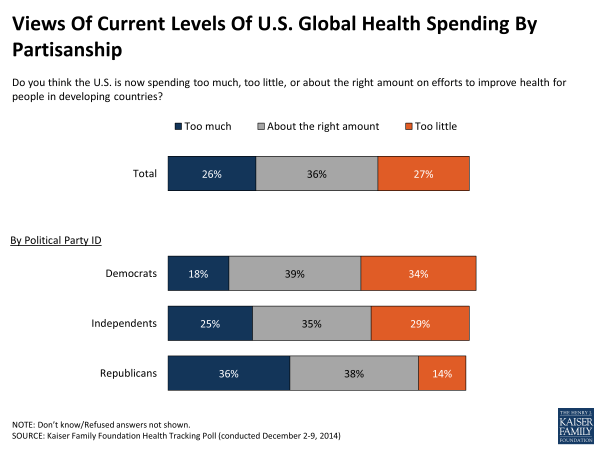 About 7 in 10 say that spending money on improving health in developing countries helps protect the health of Americans by preventing the spread of diseases like SARS and Ebola, and nearly 6 in 10 say it helps to improve the image of the U.S. throughout the world.  Over a third say spending on global health helps U.S. national security (37 percent) or the U.S. economy (36 percent). Democrats are more likely than Republicans to say that spending on global health helps in each of these areas, but still over 6 in 10 Republicans say spending helps protect Americans from disease (63 percent).

Americans often report that improving health in developing countries is one of many priorities it is important for the U.S. to address around the world.1 When asked which health issues are important for the U.S. to support globally, at least 7 in 10 say each area is important. As for the top priorities, more than half of the public say “one of the top priorities” in U.S. efforts in global health is improving access to clean water (57 percent), children’s health and vaccinations (53 percent) and reducing hunger and malnutrition (52 percent).  Next behind these basic needs is the fight against the Ebola outbreak in West Africa, mentioned as one of the top priorities by over four in ten of the public (44 percent). In December, after this survey was administered, Congress approved $5.4 billion in appropriations for Ebola and global health security efforts internationally and in the United States.2 Some high profile issues are further down the list including malaria, polio, chronic illness and reproductive health. 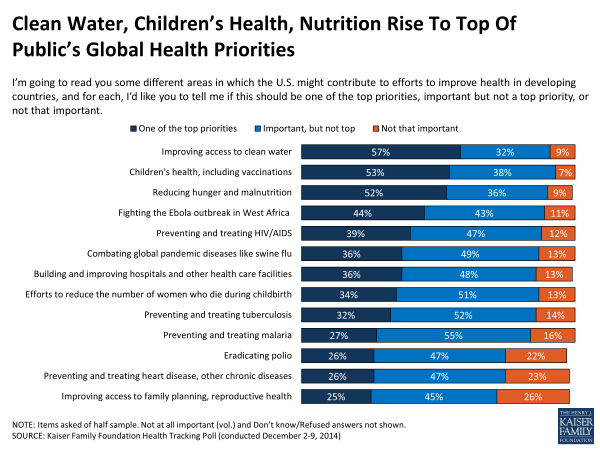 Attention To The Ebola Outbreak

Since the fall, the public has remained captivated by news coverage of the Ebola outbreak in West Africa and the diagnosed cases here in the U.S., perhaps contributing to the sentiment that fighting Ebola should be one of our country’s top global health priorities. In fact, the Kaiser Health Policy News Index finds that news coverage of Ebola in West Africa and in the U.S. ranked among the most closely followed news stories of 2014, and were the most closely followed health-related stories by a large margin. 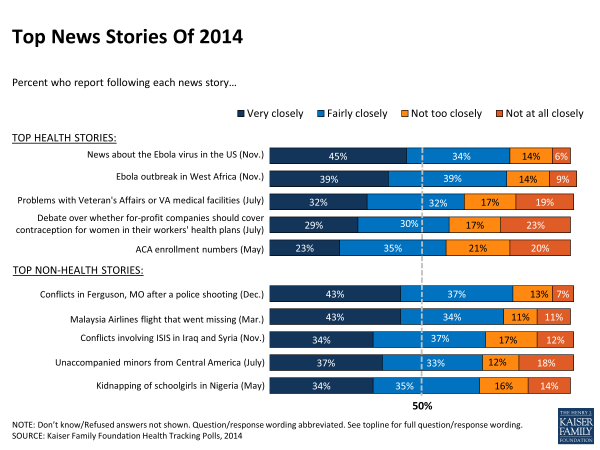 The share of Americans who report following news of the Ebola outbreak in West Africa increased as the outbreak spread. In late summer and early fall, about 6 in 10 Americans reported following news of the outbreak in West Africa closely and about 7 in 10 said they followed news about the virus in the U.S. closely. By late fall, attention to news coverage of Ebola in the U.S. and abroad had grown, with at least three-quarters saying they closely followed the story in November and December. 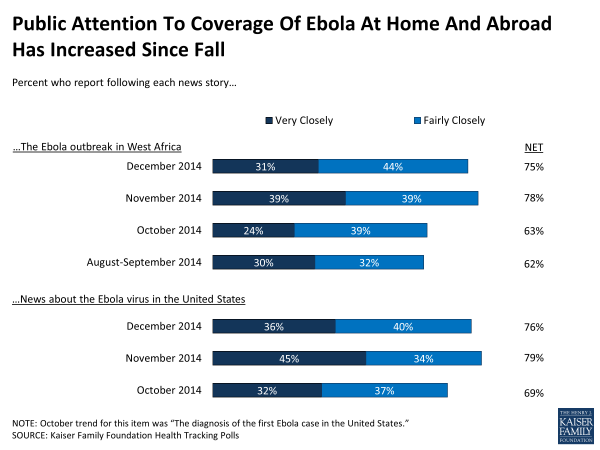 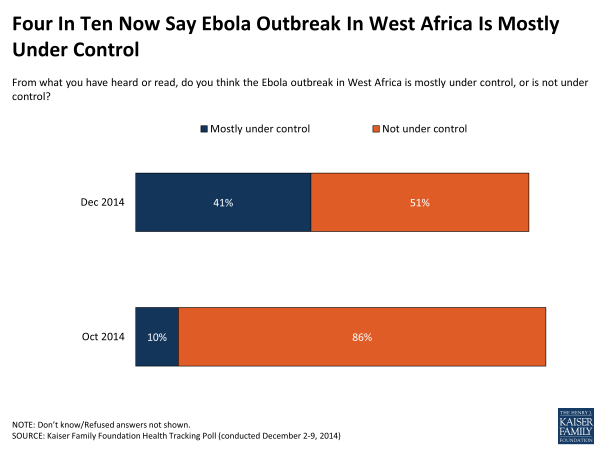