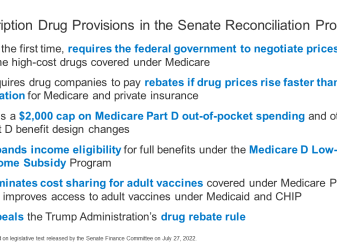 What Are the Prescription Drug Provisions in the Senate Reconciliation Proposal?

This slideshow explains the prescription drug provisions proposed in the Senate Reconciliation Proposal.

In a new Policy Watch, KFF experts explain why Medicare’s preliminary decision to cover a new Alzheimer’s drug only for a limited group of beneficiaries is likely to intensify pressure on officials to reconsider the increase in the Medicare Part B premium for 2022. Earlier this week, CMS issued a…

This policy watch discusses the implications of Medicare’s preliminary National Coverage Determination for the new Alzheimer’s drug, Aduhelm, on the 2022 Medicare Part B premium and the possibility of an adjustment based on the coverage decision. The piece also discusses the implications for Medicare spending and the connection to ongoing policy discussions around prescription drug proposals in the Build Back Better Act.