High rates of preventable maternal mortality and morbidity and wide racial and ethnic disparities have caught the attention of clinicians, public health practitioners, advocates, and policymakers.1 In the closing days of the Trump Administration, HHS released an action plan to improve maternal health, and President-elect Biden has cited this topic as a key health care issue. Vice President-elect Harris has been an advocate in the Senate for improving maternal health, particularly stemming the disproportionately high rates of maternal mortality and morbidity among Black women, and may continue to champion this work at the Executive Branch. During the 2019-2020 Congressional session, more than a dozen bills across political lines related to maternal health outcomes, care, and coverage were introduced, and many could be re-introduced when the new Congress is seated. Several federal and state efforts aim to address the postpartum period, the time shortly after the birth of an infant, an important but often neglected element of maternity care. Birthing parents may be dealing with a host of medical conditions, such as complications from childbirth, pain, depression or anxiety, all while caring for a newborn. It can be a medically vulnerable period and many cases of maternal mortality occur in the postpartum period.

While Medicaid pays for more than four in ten births and must cover pregnant women through 60 days postpartum, after that period states can and have made very different choices regarding whether eligibility for Medicaid coverage is continued. In states that have not expanded Medicaid under the Affordable Care Act (ACA), many women are left without a pathway to coverage and become uninsured just two months after giving birth. Recently, there has been growing interest from federal and state policymakers, clinicians, and health advocates in expanding Medicaid’s postpartum coverage from 60 days to one year. This brief discusses Medicaid’s eligibility for pregnancy and postpartum care, describes gaps in coverage particularly for low-income women who live in states that have not expanded Medicaid under the ACA, and highlights several state and federal efforts to extend postpartum coverage for a longer period of time.

What is Medicaid’s role for pregnancy and postpartum care?

Medicaid has long prioritized coverage of pregnant women and now finances more than four in ten births in the United States.2 Federal law requires that all states extend eligibility for pregnant women with incomes up to 138% of the federal poverty level (FPL); however, most states (48 and DC) go beyond this minimum threshold, ranging from 138% to 380% FPL. Pregnancy-related coverage must last through 60 days postpartum and the infant is eligible for Medicaid for the first year after birth. For women who qualify for Medicaid on the basis of pregnancy, all states provide pregnant women with a wide range of Medicaid benefits, including prenatal care, childbirth and delivery services. States have discretion to determine specific maternity care benefits under Medicaid. For example, many states cover substance use treatment and home visiting services but fewer cover other services such as doula care and home births.

For pregnant women who are eligible for Medicaid under the ACA’s Medicaid expansion pathway, states must cover all preventive services recommended by the United States Preventive Services Task Force (USPSTF) including many pregnancy-related services, such as prenatal screening tests and folic acid supplements as well as services in the postpartum period, such as lactation consultation and breastfeeding supplies. Importantly, all states cover family planning services before and after pregnancy. Pregnancy-related services for those enrolled under any Medicaid pathway are exempt from cost-sharing. For low-income people in particular, the lower cost sharing and absence of deductibles under Medicaid can be a major advantage over private insurance.

Where are the gaps in coverage during the postpartum period?

Following the 60 days postpartum period, mothers with incomes up to 138% FPL in the states that have expanded Medicaid under the ACA (38 states and DC) have a continued pathway to coverage. Those with incomes above 138% FPL may qualify for subsidized coverage through the ACA Marketplace. However, in the 12 states that have not adopted the ACA’s Medicaid expansion, postpartum women could qualify for Medicaid as parents to stay on the program, but Medicaid income eligibility levels for parents are much lower than for pregnant people in all of the states (Figure 1). As a result, many women in non-expansion states become uninsured after pregnancy-related coverage ends 60 days postpartum because, even though they are poor, their income is still too high to qualify for Medicaid as parents and too low to qualify for Marketplace subsidies. For example, in Texas, a married mother with a newborn loses Medicaid coverage two months after giving birth if she and her partner have an annual income above $3,733 (17% FPL). 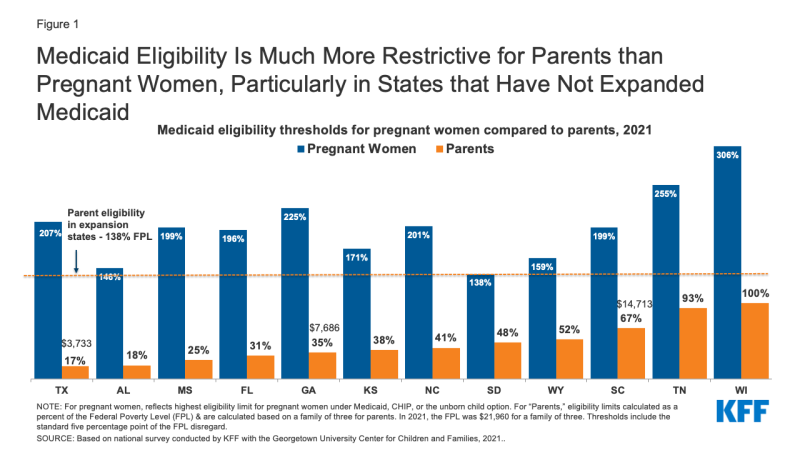 Figure 1: Medicaid Eligibility Is Much More Restrictive for Parents than Pregnant Women, Particularly in States that Have Not Expanded Medicaid 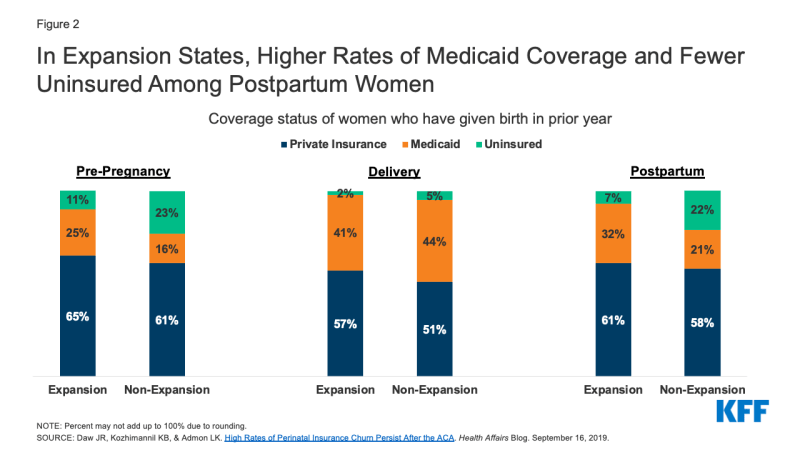 Furthermore, many women in non-expansion states who do not qualify for Medicaid after 60 days postpartum may also not qualify for subsidies to assist with the purchase of private insurance in state Marketplaces because they have incomes between the income limit for parents and 100% FPL, leaving them in the “coverage gap” with few options for affordable coverage.

How has the coronavirus affected postpartum coverage?

The Families First Coronavirus Recovery Act (FFCRA) includes an enhanced federal match (FMAP) to states, contingent on meeting maintenance of eligibility (MOE) requirements that include ensuring continuous coverage for enrollees until the end of the month in which the public health emergency (PHE) is in place. Under earlier guidance issued by the Centers for Medicare and Medicaid Services (CMS), someone qualifying on the basis of pregnancy would remain enrolled in that group, even after the 60 days postpartum period. Under a new interim final rule effective on November 2, states can move a pregnant woman from the pregnancy group to another eligibility pathway if eligible for another full benefit group, such as ACA expansion, and the benefit package for the new group is the same or more generous than the pregnant woman benefit package, move to new group. However, if the pregnancy benefit package is more generous than another pathway or the person is ineligible for any other full benefit group, they would remain enrolled in pregnancy group.

In addition to changing eligibility for coverage, the coronavirus pandemic has changed the way pregnancy and postpartum care is provided. New mothers may be more isolated from postpartum support, such as family members or doulas and women may be accessing services such as lactation consultations or postpartum checkups via telehealth. Continuity of coverage may be even more valuable given the other disruptions in care that new parents may be facing during the pandemic.4

Why is coverage for postpartum care important?

Postpartum care encompasses a range of important health needs, including recovery from childbirth, follow up on pregnancy complications, management of chronic health conditions, access to family planning, and addressing mental health conditions. While postpartum care has traditionally centered around one clinical visit six to eight weeks after delivery, there has been a paradigm shift to emphasize that postpartum care is an ongoing process that typically requires multiple visits and follow up care that may last a year or even longer. This is particularly important for those who experience pregnancy complications or have chronic conditions, such as hypertension or diabetes.

Mental health is a major concern during and after pregnancy. Suicidality among pregnant and postpartum people has risen over the past decade. At least one in ten women experience perinatal depression, and some studies suggest higher rates but poorer access to treatments among some communities of color and low-income women. ACOG recommends screening during the postpartum visit and initiation of treatment or referral to a mental health provider when a woman is identified with depression. This kind of care may be provided over a long duration, often lasting beyond 60 days.

Addressing pregnancy-related deaths (typically defined as death within one year of pregnancy)5, particularly the substantially higher rates among Black and American Indian and Alaska Native (AIAN) women, is an urgent health challenge.6 At least one-third of maternal deaths occur in the postpartum period. Identifying the causes of maternal mortality and morbidity is complex, and coverage is only one factor, but research strongly indicates that access to health care throughout a woman’s reproductive years, is essential for prevention, early detection, and treatment of some of the conditions that place women at higher risk for pregnancy-related complications, including cardiovascular disease, diabetes, and chronic hypertension. Coverage disruptions during the perinatal period disproportionately affect Black, AIAN, and Hispanic women. Furthermore, a wide array of conditions that may present or persist through the postpartum period, including mental health challenges, intimate partner violence, and substance use, all play a role in maternal mortality and broader maternal health outcomes.

What can states do to extend postpartum coverage under Medicaid?

Assuring that low-income women have continuous coverage after pregnancy would support improvements in infant and maternal outcomes. States have several main pathways for broadening coverage in the postpartum period to Medicaid beneficiaries. These would all involve some increase in state spending, but with substantial federal matching funds available as well. Potential approaches, in decreasing order of scope and reach, include: 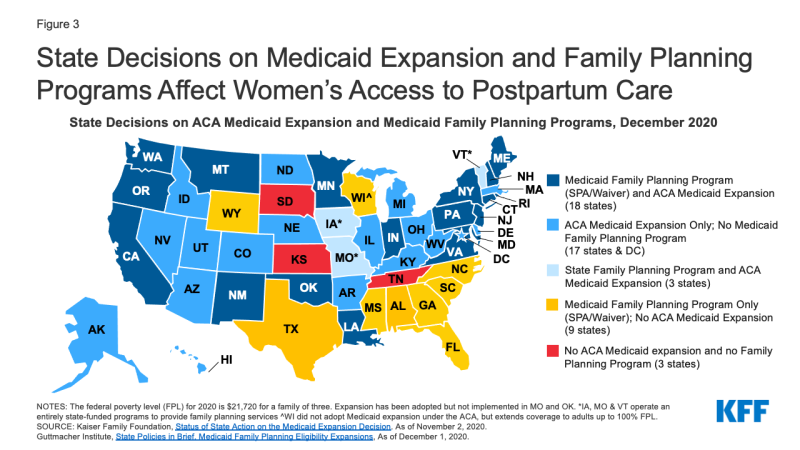 What legislative proposals are currently being considered at the federal level to broaden postpartum coverage and strengthen maternity care?

In the 2019-2020 Congressional session, a number of federal bills related to maternal health care coverage, access, and quality are pending. Major themes across these bills include extension of Medicaid postpartum coverage to 12 months, coverage of doulas, greater support for state maternal mortality review committees, broadening provider networks in rural areas, and training on health equity and implicit bias for providers. Some notable federal bills that have garnered attention include:

As President-elect Biden, Vice President-elect Harris, and a new Congress come into office, maternal health, particularly large and persistent racial and ethnic inequities, continues to be a major health challenge. Coverage changes alone cannot address these issues, but given Medicaid’s large role in maternity financing and health coverage for communities of color, an extension of postpartum coverage for the full year after a Medicaid birth could provide stable coverage and care to more low-income birthing parents in both non-expansion and expansion states. For birthing parents, the need for health care services does not end two months after childbirth.

The ACA offers states the option to extend Medicaid eligibility to low-income parents with incomes up to 138% of the federal poverty level. However, in the 12 states that have not adopted full scope Medicaid expansion, most postpartum women lack a pathway to coverage and are at greater risk of becoming uninsured and losing access to critical health services in the postpartum and intrapartum periods. Some federal and state-level initiatives are in place to provide coverage for family planning or other more limited services to some reproductive age and postpartum people, but they do not provide the same level of coverage afforded by full scope Medicaid. Absent federal action, these decisions will continue to be in the hands of the states to decide whether to choose from among a number of pathways to expand coverage for new parents.