Marketing and Privacy Issues: An Analysis of the MMA and Proposed Regulations

This paper, by Joy Pritts of the Health Policy Institute at Georgetown University, looks at issues related to drug plan marketing activities and privacy under the MMA.Issue Brief (.pdf)

This updated chartpack presents sources of supplemental and prescription drug coverage among Medicare beneficiaries in 2007, the most recent year for which national data are available. The chartpack looks at variations in supplemental and prescription drug coverage by income, race/ethnicity, age, urban/rural location, and health status. It also examines characteristics… 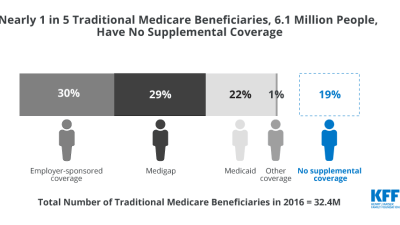 This survey documents the increasing costs of retiree benefits for both large private-sector employers and their retirees. It also provides an early look at the response of large employers to the Medicare prescription drug law and the subsidies it provides for maintaining retiree drug coverage. Download Full Report (.pdf) Chartpack (.pdf)

The Implications of Medicare Prescription Drug Proposals for Employers and Retirees

Retiree Health Benefits Now and in the Future, Report

Retiree Health Benefits Now and In the Future – ReportThis survey, conducted by the Kaiser Family Foundation and Hewitt Associates between June and September 2003 provides detailed information on retiree health programs offered by large private-sector employers. The data in this survey reflect the responses of 408 large firms (private-sector…