President Donald Trump and the GOP congressional leaders have talked about modernizing Medicare, including a proposal from House Republicans to create a premium-support system for Medicare.  In the wake of passage of the GOP tax bill, which is expected to add to the national debt, there may be a focus on reining in the cost of entitlement programs such as Medicare, which may have significant implications for the Medicare program and its beneficiaries. The Trump administration also has shown interest in prescription drug spending in Medicare as well as in Medicare delivery system reform efforts such as Accountable Care Organizations, bundled payments and medical homes. Medicare Advantage now covers 1 in 3 Medicare beneficiaries and recent trends toward consolidation among insurers could have implications for beneficiaries. 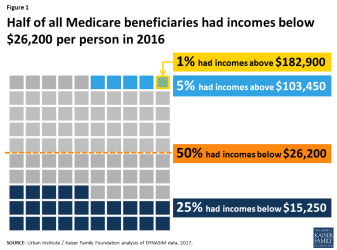 Income and Assets of Medicare Beneficiaries, 2016-2035

This issue brief, co-authored by researchers at the Kaiser Family Foundation and the Urban Institute, describes the income, savings, and home equity of current Medicare beneficiaries, considers variations by race, ethnicity and other demographic characteristics, and examines the extent to which income and assets are projected to be higher among the next generation of beneficiaries. 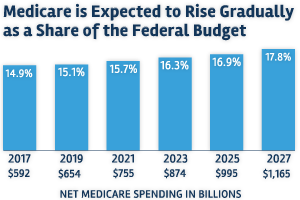 The Nuts and Bolts of Medicare Premium Support Proposals

In April 2011, as part of its 2012 budget resolution, the U.S. House included a proposal to reduce Medicare spending by transforming the program into a system sometimes called “premium support” or vouchers. Such an approach also has been a central element of other proposals by national leaders seeking to…

This short Kaiser Family Foundation documentary profiles the experiences of three Medicare families trying to pay for their health care costs with other household spending. The families are among 16 featured in a companion report examining the role Medicare now plays in the lives of beneficiaries and the challenges many…

How Much Skin in the Game is Enough? The Financial Burden of Health Spending for People on Medicare

How Much ” Skin in the Game ” is Enough? The Financial Burden of Health Spending for People on Medicare Medicare extends health security and financial protection to seniors and younger people with disabilities. However, premiums, relatively high cost-sharing requirements, and gaps in the benefit package result in some beneficiaries…

Proposed Changes to Medicare in the “Path to Prosperity”: Overview and Key Questions

This brief examines key Medicare provisions included in “The Path to Prosperity: Restoring America’s Promise,” a long-term budget proposal released by House Budget Chairman Paul Ryan on April 5, 2011, which outlines a strategy for reducing federal spending and reducing the national debt over time. The Medicare provisions are among…