More Americans Back Than Oppose State Medicaid Expansions But, Like Many Governors, Public Splits Along Party Lines On The Federal Deficit, Public Wants Action But Still Resists Most Cuts and Sacrifices, Especially to Medicare A majority of Americans put the creation of state-based health insurance exchanges at the top of… 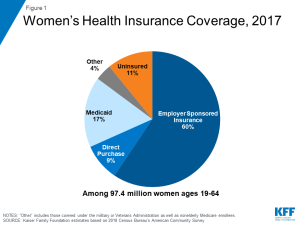 This factsheet reviews major sources of coverage for women residing in the U.S. in 2017, discusses the impact of the ACA on women’s coverage, and the coverage challenges that many women continue to face.

Health Insurance Exchanges: Can States and the Federal Government Meet the Deadline?

The Alliance for Health Reform and the Commonwealth Fund sponsor a July 27 briefing to discuss how states are facing implementation and evaluation deadlines in regards to health insurance exchanges. Speakers will explore such questions as: What needs to happen between now and January 2014 for states to successfully implement…

CBO’s Estimate of Repealing Exchange Grants: The Importance of Being Effective

The Congressional Budget Office (CBO) recently released an analysis of a bill that would repeal grants to states under the health reform law to help them establish health insurance purchasing exchanges. Not surprisingly, CBO finds that the bill would reduce federal spending due to the fact that expected grants won’t…

Final update made on October 24, 2013 (no further updates will be made) Establishing the Marketplace On February 15, 2013, Governor Earl Ray Tomblin (D) submitted a blueprint to Secretary Sebelius for West Virginia to establish a Partnership Marketplace with plan management responsibilities.1 In the previous year, Governor Tomblin…

Marketplace open enrollment, the period during which consumers can shop for health plans or renew existing coverage through the Affordable Care Act’s health insurance marketplaces, begins on Nov. 1. Recent policy changes at the state and federal levels have the potential to impact individuals and families purchasing health insurance for…

ANALYSIS: More than Half of Uninsured People Eligible for Marketplace Insurance Could Pay Less for Health Plan than Individual Mandate Penalty

A new Kaiser Family Foundation analysis finds that more than half (54% or 5.9 million) of the 10.7 million people who are uninsured and eligible to purchase an Affordable Care Act marketplace plan in 2018 could pay less in premiums for health insurance than they would owe as an individual mandate tax penalty for lacking coverage.