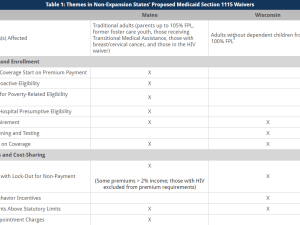 How Will the Uninsured in Maine Fare Under the Affordable Care Act?

Final update made on April 2, 2013 (no further updates will be made)  Establishing the Exchange On November 16, 2012, Governor Paul LePage (R) wrote in a letter to federal officials that Maine would not be pursuing efforts to implement a state-based health insurance exchange.1 Legislation establishing a state-run health insurance…