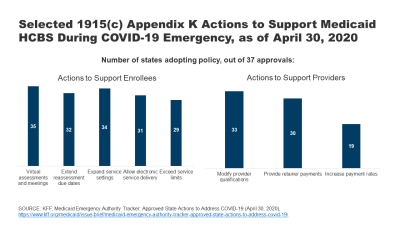 How Are States Supporting Medicaid Home and Community-Based Services During the COVID-19 Crisis?

Stakeholders in dozens of communities around the nation are taking action to improve quality of care locally by engaging in one or more collaborations. What does each program offer? What goals do they have in common? How do they relate to a national quality strategy? This briefing, cosponsored by the…

This background paper examines various aspects of the Medicaid program that can expand access to home and community-based services (HCBS) and rebalance long-term care spending in favor of HCBS. As a result of the long-standing requirement that states cover facility-based care, the majority of Medicaid long-term care (LTC) expenditures historically…

This issue brief provides an early snapshot into disability community perspectives on state design and implementation efforts related to the new financial alignment demonstrations for beneficiaries dually eligible for Medicare and Medicaid, with an emphasis on non-elderly beneficiaries and those who use long-term services and supports.

The Affordable Care Act’s Impact on Medicaid Eligibility, Enrollment, and Benefits for People with Disabilities

This brief profiles four Medicaid long-term services and supports beneficiaries who transitioned back to the community as participants in the Money Follows the Person demonstration program in Maryland or Tennessee.

This report features nine seniors and people with disabilities living in Florida, Georgia, Kansas, Louisiana, North Carolina, and Tennessee, who rely on home and community-based services (HCBS). These profiles illustrate how beneficiaries’ finances, employment status, relationships, well-being, independence, and ability to interact with the communities in which they live—in addition to their health care—are affected by their Medicaid coverage and the essential role of HCBS in their daily lives.