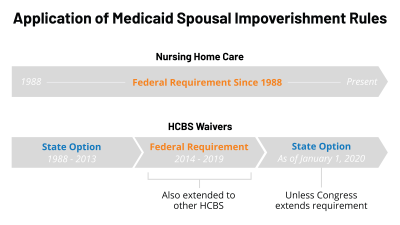 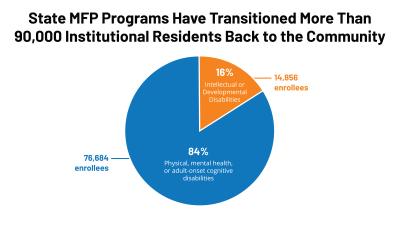 Medicaid’s Money Follows the Person (MFP) demonstration has helped seniors and people with disabilities move from institutions to the community by providing enhanced federal matching funds to states since 2007. The program operates in 44 states and has served over 90,000 people as of June 2018. The program is credited with helping many states establish formal institution to community transition programs that did not previously exist by enabling them to develop the necessary service and provider infrastructure. With a short-term funding extension set to expire on December 31, 2019, MFP’s future remains uncertain without a longer-term reauthorization by Congress.

Although relatively few Medicaid beneficiaries are in capitated managed long-term services and supports (LTSS) programs, significant expansion is anticipated as more than half of states are implementing or proposing new programs that would include a transition from fee-for-service (FFS) to capitated managed care in the LTSS delivery system. By definition,…

The Medicaid program is a source for many innovative practices in making long-term services and supports (LTSS) available to consumers. Jointly financed by the states and the federal government, Medicaid pays for 40 percent of LTSS spending the United States. Case management services have been integral to Medicaid community-based LTSS…

Medicaid Long-Term Services and Supports: An Overview of Funding Authorities

Money Follows the Person: A 2011 Survey of Transitions, Services and Costs

With the passage of health reform, the Money Follows the Person (MFP) demonstration grant program was extended through 2016 giving states further options to transition Medicaid beneficiaries living in institutions back to the community. Enacted into law in 2006 as part of the Deficit Reduction Act (DRA), the MFP demonstration…

This case study looks at Washington state’s Money Follows the Person demonstration program, Roads to Community Living. The program is responsible for assisting over 2,400 Medicaid beneficiaries with complex long-term services and supports (LTSS) needs in transitioning out of institutions back to community-based care settings. Washington State has been a…

More Than Meets the Eye: Long-Term Care Provisions in the New Reform Law

In the debates around the health reform law and its implementation, little attention has been given to the law’s provisions supporting long-term care. This briefing offered an overview of these provisions, such as the CLASS Act, a new national, voluntary insurance program to help working adults finance services and supports…