Community Health Centers in an Era of Health System Reform and Economic Downturn: Prospects and Challenges

This issue brief reviews the role of community health centers in the nation’s health care safety net. The centers provided comprehensive primary care to 16.1 million patients in 2007, many of them from lower-income families and medically underserved communities. The role of the centers is even more critical during an… 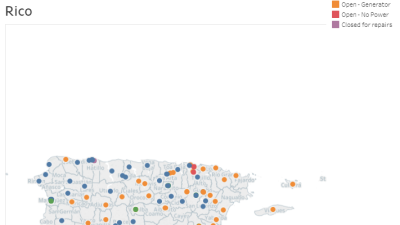 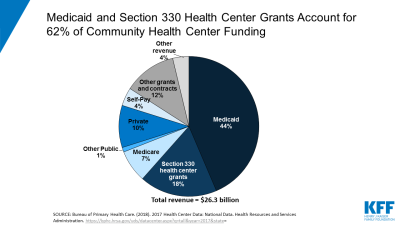 This issue brief describes the two primary sources of health center revenue—Medicaid and Section 330 grant funding. The evolution of these funding streams has contributed to significant growth in the health center program, enabling expanded services to millions of additional residents of the nation’s most medically underserved rural and urban communities. 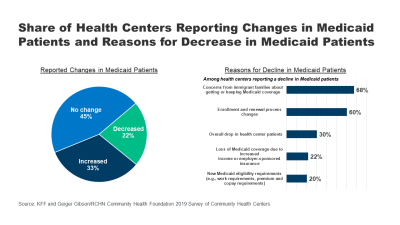 With health centers playing an important role in the response to the coronavirus pandemic, findings from the KFF/Geiger Gibson 2019 Community Health Center Survey provide important information on health centers’ financial situation and their experiences in a changing policy environment. After years of growth following implementation of the Affordable Care Act (ACA), changes in Medicaid, public charge, and Title X family planning policies, among others, carry important implications for low-income patients as well as health center operations and revenue. 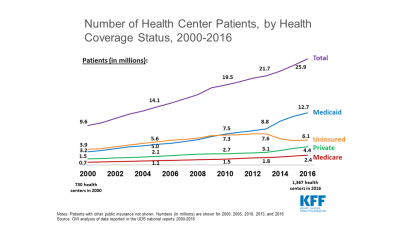 Community health centers provide essential access to comprehensive primary care in underserved communities. This issue brief describes health centers and their patients in 2016 and examines changes in access to care and utilization of services by health center patients following implementation of the ACA coverage expansions in 2014. 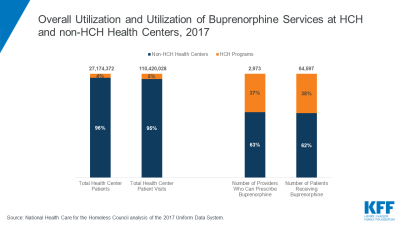 Addressing the Opioid Crisis: Medication-Assisted Treatment at Health Care for the Homeless Programs

Health Care for the Homeless (HCH) programs, a subset of community health centers, play a significant role in addressing the opioid epidemic by providing medication-assisted treatment (MAT). MAT, which combines one of three medications (methadone, buprenorphine, or naltrexone) with behavioral therapies, is the standard of care for opioid use disorder (OUD). This brief presents findings from an analysis of health center data on the provision of buprenorphine-based MAT, as well as interviews with providers and administrators from 12 HCH programs about strategies they adopted to implement MAT programs. 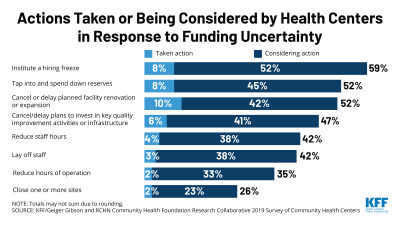 With the Community Health Center Fund, a key source of federal funding, set to expire in September, community health centers across the country are considering steps to reduce staffing, close some locations and eliminate or reduce services as they cope with uncertainty about their future financing.