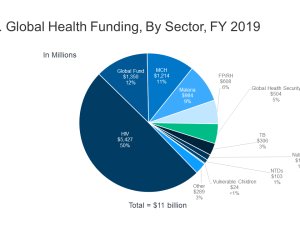 This report maps the network of international assistance aimed at addressing the global impact of tuberculosis (TB). The report is part of a series that examines the donor nations and multilateral organizations involved in addressing different global health challenges in recipient countries worldwide.

This report maps the complex network of international assistance aimed at addressing the global impact of HIV/AIDS, looking both at donor governments and multilateral organizations. It seeks to provide perspective on the geographic presence of global health donors and to enable more effective coordination and delivery of services globally and within individual recipient nations. This report is the first in a series that will examine donor presence and magnitude of assistance by issue area, region and country. 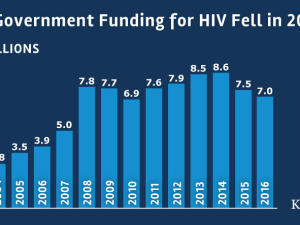 Kaiser/UNAIDS Study Finds Donor Government Funding for HIV Declined by 7% in 2016, Falling to Lowest Level Since 2010

Donor government funding to support HIV efforts in low- and middle-income countries decreased by US$511 million from US$7.5 billion in 2015 to US$7 billion in 2016, finds a new report from the Kaiser Family Foundation and the Joint United Nations Programme on HIV/AIDS (UNAIDS). This marks the second successive year of… 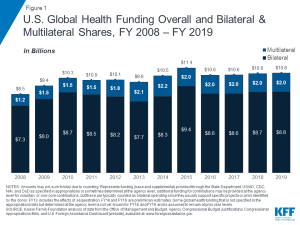 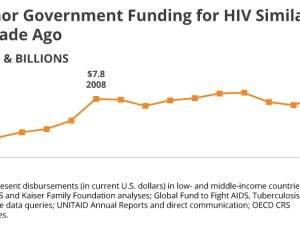 This report, produced in partnership with UNAIDS, tracks funding levels of the donor governments that collectively provide the bulk of international assistance for AIDS through bilateral programs and contributions to multilateral organizations. It provides the latest data available on donor funding disbursements based on data provided by governments, including their bilateral assistance to low- and middle-income countries and contributions to the Global Fund to Fight AIDS, Tuberculosis and Malaria as well as UNIAID.