This Data Spotlight provides an overview of Medicare Advantage enrollment patterns in March 2013, and examines variations by plan type, state, and firm. It also analyzes trends in premiums paid by beneficiaries enrolled in Medicare Advantage plans, including variations by plan type, and describes the out-of-pocket limits and prescription drug coverage in the Part D “donut hole” provided by the plans in 2013.

To Switch or Not to Switch: Are Medicare Beneficiaries Switching Drug Plans To Save Money?

This analysis finds that relatively few Medicare beneficiaries have switched Part D prescription drug plans voluntarily during the annual open enrollment period — even though those who do switch often lower their out-of-pocket costs as a result of changing plans. The vast majority (87% on average between 2006 and 2010) stayed in the same Part D plan, even though the plans can change premiums, deductibles, cost-sharing amounts, and their list of covered drugs each year. Higher rates of plan switching were observed in PDPs that increased premiums, increased deductibles, or dropped coverage of brand-name drugs in the coverage gap. 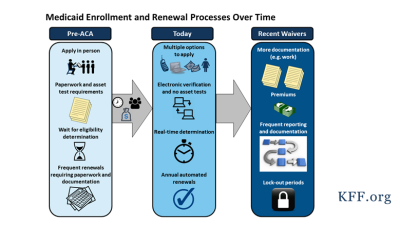 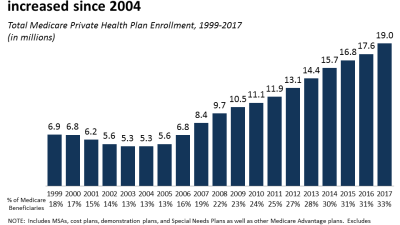 This Data Spotlight reviews national and state-level enrollment trends as of March 2017 and examines variation in enrollment by plan type and firm. It analyzes the most recent data on premiums, out-of-pocket limits, Part D cost-sharing for drugs, and plans’ quality ratings for Medicare Advantage enrollees.

1 in 3 People in Medicare is Now in Medicare Advantage, With Enrollment Still Concentrated Among a Handful of Insurers

For the first time, 1 in every 3 people with Medicare is enrolled in Medicare Advantage, the private Medicare plans that have played an increasingly large role in the Medicare program over the past decade, according to a new analysis from the Kaiser Family Foundation. Medicare Advantage enrollment has more…

Despite tight budgets, nearly all states maintained or made targeted expansions or improvements in their Medicaid and Children’s Health Insurance Programs (CHIP) eligibility and enrollment rules in 2010, preserving the programs’ important role of providing coverage to millions of low-income Americans who otherwise lack affordable options. This stability in large…

Overview of Health Coverage for Individuals with Limited English Proficiency

This brief provides an overview of the population of people in the United States with limited English proficiency (LEP) and describes their access to health coverage and care. There were 21.1 million such individuals in 2010, accounting for nearly 9 percent of the nonelderly population. Most are Hispanic, Spanish-speaking adults.…