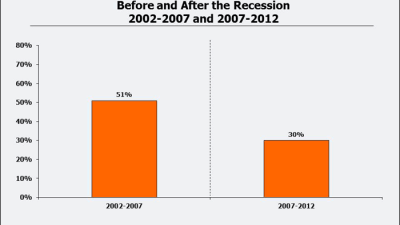 Pulling it Together: Reflections on This Year’s Four Percent Premium Increase

Our 2012 Employer Health Benefits Survey found a 4% increase in premiums this year, continuing the recent trend of moderation in health costs and spending reported in several studies. Double digit increases in premiums were once a common occurrence, but we have not seen any since a 10% increase in…

The distribution of enrollment among types of health plans has remained fairly constant over the past several years. The majority of covered workers are enrolled in PPO plans (55%), followed by HMO plans (25%) (Exhibit 5.1). Although annual changes in plan enrollment have been moderate, enrollment in PPO plans has…

Medicaid and Health System Reform: The Potential for Integration into an Employer-Based System

Report: Medicaid and Health System Reform: The Potential for Integration into an Employer-Based System

Pulling it Together: The Sleeper in Health Reform

The health reform legislation currently being crafted on Capitol Hill is undeniably complex.  To oversimplify slightly it can be boiled down into four parts: coverage (subsidies for private coverage and Medicaid expansions); delivery and payment reforms; insurance market reforms and regulations; and prevention, with each broad category containing a range…

Changes in Health Insurance Coverage, 2007-2008: Early Impact of the Recession

This issue brief examines trends in health insurance coverage from 2007 to 2008, a period marked by the start of a deep recession. It finds that the share of the nonelderly population covered by employer-provided insurance declined, the share covered by public programs increased and the number of uninsured people…

There are important differences in the legal organization and mission of different employers in the United States. In addition to collecting information about premiums and employee cost sharing, the 2012 Employer Health Benefits Survey asked respondents to characterize their ownership structure. Respondents were asked to describe their organization as either a “private…