Medicare and Medicaid at 50 Years: Perspectives of Beneficiaries, Health Care Professionals and Institutions, and Policy Makers

In this article for the Journal of the American Medical Association (JAMA), Drew Altman and former U.S. Senate Majority Leader William Frist examine the roles the Medicaid and Medicare play in the health system today from the perspectives of the public and beneficiaries, providers, and policymakers, and discusses the challenges they face in the future. The article is accompanied by an audio interview with Altman and Frist, who is a member of the Foundation’s board of trustees. 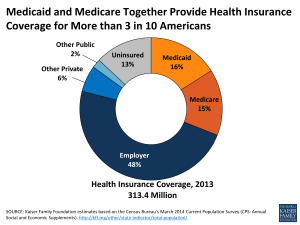 Medicaid and Medicare at 50: Trends and Challenges

The recession accelerated the long-standing decline in employer-sponsored health insurance and through 2013 most of the recovery in the uninsured rate was due to increased enrollment in public insurance, primarily Medicaid and the Children’s Health Insurance Program (CHIP). With the exception of young adults ages 19 to 25, who are able to remain on their parents’ health plan until age 26 under the ACA, ESI coverage rates for adults and children continued to decrease between 2010 and 2013.

Rural populations face disparities compared to metropolitan populations in health care. While rural individuals were not more likely to be uninsured than metropolitan counterparts pre-Affordable Care Act, they were poorer and less likely to have private insurance. With coverage changes in the ACA involving an expansion of Medicaid for poor and near-poor populations, decisions by states with large rural populations may cause rural residents to have disparate access to coverage, which may exacerbate cost and access barriers to health care.

The Alliance for Health Reform and the Kaiser Family Foundation’s Commission and Medicaid and the Uninsured discuss the Census uninsured numbers. The Census Bureau announced that the number of people without health insurance dropped from 50 million to 48.6 million in 2011, marking the first decrease since 2007. That information…