Today’s Topics In Health Disparities: The Effect of the Economic Downturn on the Health of Communities of Color

Transcript (.pdf) On Wednesday, March 25, the Kaiser Family Foundation held a live, interactive webcast to examine the economic downturn’s impact on health care in communities of color as part of its Today’s Topics In Health Disparities series. Rising unemployment has left many families uninsured and increasingly strained family finances… 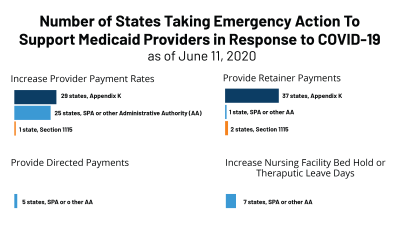 Options to Support Medicaid Providers in Response to COVID-19

Embargoed for release until: November 10, 2005, 9:30 a.m. E.T. For further information contact: Craig Palosky, (202) 347-5270 or cpalosky@kff.org Larry Levitt, (650) 854-9400 or llevitt@kff.org AS ENROLLMENT BEGINS, NEW SURVEY UNDERSCORES CHALLENGES IF SENIORS ARE TO TAKE ADVANTAGE OF MEDICARE DRUG BENEFIT Many Seniors Say They Don’t Understand the… 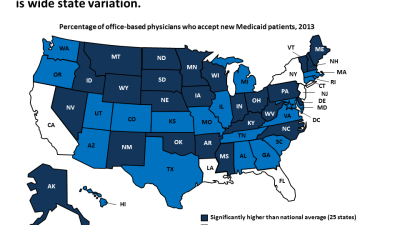 The Medicaid program covers 74 million low-income Americans, including many of the poorest and sickest people in our society. Among those served are pregnant women and children, parents and other adults, poor seniors, and people with disabilities. Given Medicaid’s major coverage role and the complex needs of the populations it covers, data and evidence on access to care and health outcomes in Medicaid are of key interest. Such an assessment is also important to ensure that debate about the effectiveness of the Medicaid program is grounded in facts and analysis. This Data Note discusses what the research shows.

June 5, 2006, marks twenty-five years since the U.S. Centers for Disease Control and Prevention issued its first warning about an emerging illness that soon became known as AIDS. In recognition of this day, the Kaiser Family Foundation is releasing several new and updated resources:Evolution of an Epidemic: 25 Years…

As Many Americans Would Like To Keep or Expand Health Reform Law As Would Like To Repeal Or Replace It, And Most Oppose Defunding Implementation Public Concerned About The Deficit But A Majority Opposes Cutting Medicare And Social Security And Nearly Half Are Against Cutting Medicaid WASHINGTON – Though the…