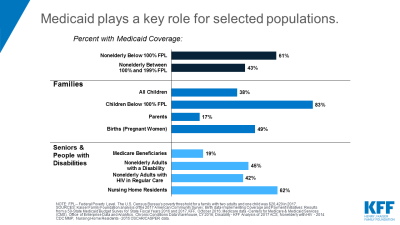 10 Things to Know about Medicaid: Setting the Facts Straight

Medicaid is the nation’s public health insurance program for people with low income. The Medicaid program covers 1 in 5 low-income Americans, including many with complex and costly needs for care. The vast majority of Medicaid enrollees lack access to other affordable health insurance. Medicaid covers a broad array of health services and limits enrollee out-of-pocket costs. The program is also the principal source of long-term care coverage for Americans. Medicaid finances nearly a fifth of all personal health care spending in the U.S., providing significant financing for hospitals, community health centers, physicians, nursing homes, and jobs in the health care sector. Title XIX of the Social Security Act and a large body of federal regulations govern the program, defining federal Medicaid requirements and state options and authorities. The Centers for Medicare and Medicaid Services (CMS) within the Department of Health and Human Services (HHS) is responsible for implementing Medicaid. 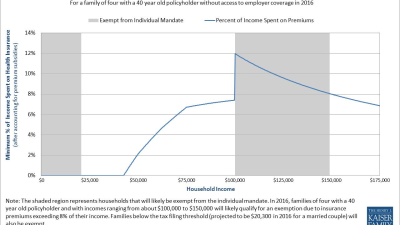 Pulling it Together: Duals: The National Health Reform Experiment We Should Be talking More About

The Center for Medicare & Medicaid Services (CMS) and 26 states are moving to launch a large scale managed care demonstration project potentially involving millions of the poorest, sickest, most expensive Medicare and Medicaid beneficiaries, the so-called dual eligibles. The experiment is getting more and more attention from policy experts,…