An Early Look at the Affordable Care Act and Women

On Thursday, May 15 at 9:30 a.m. ET, the Kaiser Family Foundation will host a public briefing to release a new report based on the Foundation’s most recent comprehensive survey on women’s health.  This report provides new findings that will be critical to understanding women’s early experiences with the coverage… 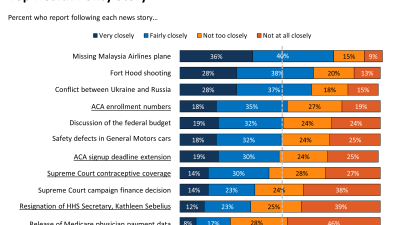 Pulling it Together: Duals: The National Health Reform Experiment We Should Be talking More About

The Center for Medicare & Medicaid Services (CMS) and 26 states are moving to launch a large scale managed care demonstration project potentially involving millions of the poorest, sickest, most expensive Medicare and Medicaid beneficiaries, the so-called dual eligibles. The experiment is getting more and more attention from policy experts,…

The Public Expects Parts Of The Affordable Care Act To Continue Whatever The Court Rules Two Years After Passage The Public Is Evenly Divided On The Law, Split Sharply Along Partisan Lines MENLO PARK, Calif. — The requirement that nearly everyone obtain health insurance or pay a fine has long…

NEWS RELEASE Thursday, October 27, 2011 New 50-State Survey Finds Cuts In Provider Payments And Changes In Delivery Of Services WASHINGTON, D.C. – Faced with the end of stimulus money and a continuing weak economy, Medicaid officials in virtually every state are enacting a variety of cost cutting measures as states’…

Final update made on December 11, 2012 (no further updates will be made)  Establishing the Exchange On November 14, 2012, Governor Matt Mead (R) acknowledged Wyoming would default to a federally-operated health insurance exchange for 2014, with the possibility of moving to a state-run exchange in the future.1 Governor Mead…