The Washington Post-Kaiser Family Foundation Survey Project is a partnership combining survey research and reporting to better inform the public. The Post-Kaiser Survey of Puerto Rico Residents, the 33rd in the series, was conducted in-person from July 3 to August 29, 2018 among a random sample of 1,500 adults ages 18 or older residing in Puerto Rico who were living there when Hurricane Maria struck the island on September 20, 2017. Computer-assisted in-person interviews were conducted at the respondent’s home and were carried out in Spanish.

To ensure representation across Puerto Rico, the sample was stratified into five regions comprised of Puerto Rico’s 78 municipalities. These included Metropolitan, North-Central, West, East and South. Across all regions, 100 Census Block Groups were randomly sampled in proportion to each region’s size (i.e. more Block Groups were selected in more populous areas) and 15 interviews with randomly selected adults were conducted in each Block Group. The sample frame was based on the 2010 U.S. Census of Population and Housing in Puerto Rico and the 2016 Puerto Rico American Community Survey. Regions and selected Block Groups are identified in the map below. 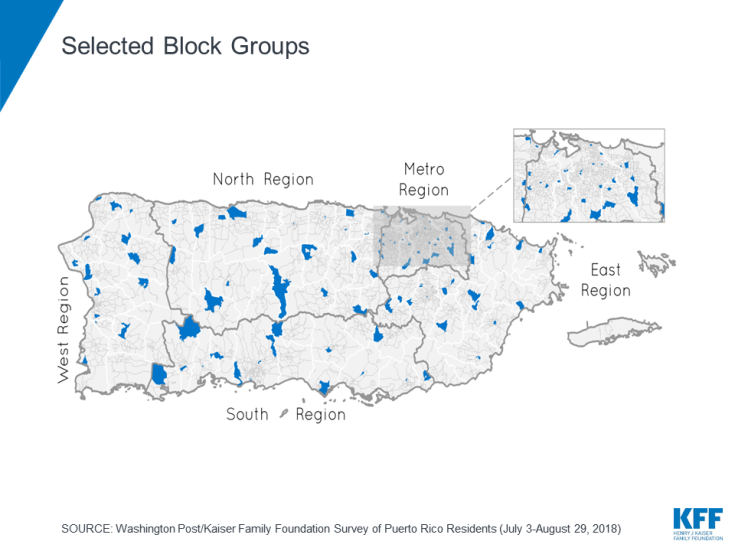 In order to randomly select adults to interview, interviewers went to a randomly selected block within each Block Group. The first household was selected randomly and subsequent households were selected following a systematic pattern (i.e. every fifth house or every sixth house). Interviewers made three attempts at different times of the day and different days of the week at each randomly selected household until an interview or a hard refusal was obtained. If the selected household was not available, the interviewer went to the house immediately next door. These field methods were put in place to ensure a representative sample of people who were home at different times, rather than just including the people who were easiest to find at home.

A multi-stage weighting process was applied to ensure an accurate representation of the Puerto Rican population. The first stage of weighting involved computing a household weight and was followed by the creation of a population weight. The sample was then weighted to match demographic estimates for the Puerto Rican population using data from the Census Bureau’s 2012-2016 American Community Survey on sex and age within each region and that regions are proportionately representative of the adult Puerto Rico population. Finally, data were balanced by education using the overall 2016 Puerto Rico ACS estimates.

At the end of the field period, Estudios Tecnicos and SSRS completed several data validation processes on the data that included: internal validity checks, testing for straightlining and analyzing paradata (interviewer workload, interview length, interview time and overlap of interviews). The Kaiser Family Foundation, along with SSRS, also conducted a percent-match procedure to identify cases that share a high percentage of identical responses to a large set of questions. This extra validation measure allows for detection of possible duplicate data, whether as a result of intentional falsification or due to errors in data-processing.