During the Medicare Part D annual enrollment period from October 15 to December 7, people on Medicare can review and compare stand-alone prescription drug plans (PDPs) and Medicare Advantage plans and switch plans if they choose.  Low-income beneficiaries who receive premium and cost-sharing assistance through the Part D Low-Income Subsidy (LIS) program have a subset of premium-free PDPs (benchmark plans) available to them, but can also choose to enroll in a non-benchmark plan and pay a premium. Each year, the list of premium-free PDPs changes. When PDPs lose their premium-free status, the Centers for Medicare & Medicaid Services (CMS) automatically reassigns many of their LIS enrollees to another premium-free PDP; however, CMS does not reassign LIS enrollees who have chosen a plan other than their assigned PDP.  LIS Part D plan enrollees, unlike non-LIS enrollees, are also permitted to switch plans at any time outside the annual enrollment period.

Key findings from this analysis are:

The CMS policy for determining which LIS enrollees will be automatically reassigned attempts to balance the desire to ensure that LIS beneficiaries are not required to pay premiums and the desire to respect voluntary enrollment decisions made by some LIS beneficiaries. This policy has shielded many low-income beneficiaries from incurring premium costs for Part D coverage, but as our analysis shows, it has the potential to reduce the financial protection available through the LIS program for the share of LIS enrollees who have chosen their own plans.

The Medicare Part D Low-Income Subsidy (LIS) program helps reduce overall out-of-pocket costs for beneficiaries with low incomes, generally those with incomes of less than 150 percent of the federal poverty level and limited resources. LIS beneficiaries are entitled to premium-free coverage and significantly reduced cost sharing.2 In 2015, beneficiaries qualify for these subsidies if they are enrolled for Medicaid through Medicare Savings Programs or if they have incomes less than $17,655 and assets less than $13,640 (these amounts are $23,895 and $27,250, respectively, for couples). In 2015, 11.7 million Part D enrollees (30 percent of all Part D enrollees) were receiving the LIS; of this total 8.0 million (68 percent) were enrolled in stand-alone prescription drug plans (PDPs) and 3.7 million (32 percent) in Medicare Advantage drug plans (MA-PDs).3

LIS enrollees may choose to enroll in any plan in their area, but the subsidy makes premium-free coverage available only from a designated set of PDPs with a premium amount below a specific benchmark.6 The benchmark amount in each area—and thus the subset of plans that are premium free for LIS enrollees—changes annually (see Appendix 2: Benchmark Plans).7 In the annual enrollment period for the 2008 plan year, for example, nearly one-third of all LIS beneficiaries were enrolled in premium-free PDPs in 2007 that would not be premium-free in 2008 or were exiting the Part D market entirely.8 If LIS enrollees remain in plans that lose benchmark status, they are exposed to higher costs unless they change to another zero-premium (benchmark) drug plan.

To help ensure that LIS enrollees avoid added premium costs as the availability of benchmark plans changes, CMS conducts a reassignment process each year (Figure 1). LIS enrollees whose current plan would charge them a premium for the coming year are eligible for reassignment only if they were assigned to that plan by CMS. CMS randomly reassigns these beneficiaries to one of the benchmark plans in their region. 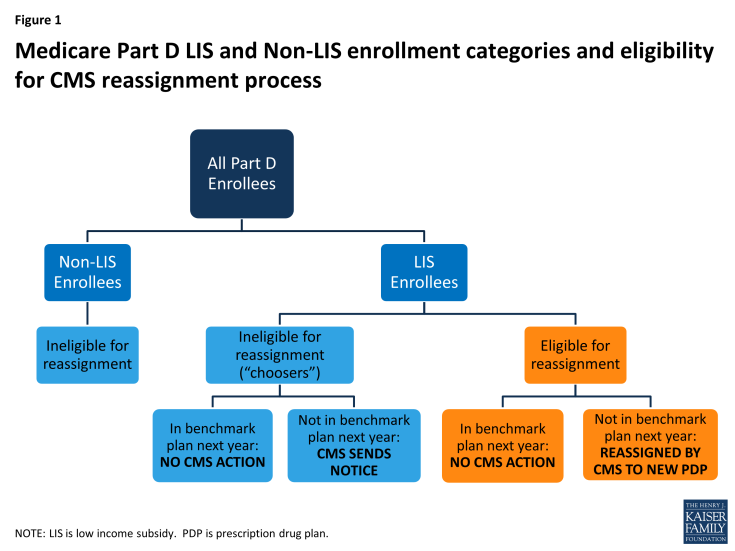 This analysis examines plan changes among LIS enrollees in stand-alone PDPs between 2006 and 2010. The question of how many LIS enrollees change plans during the annual enrollment period has both coverage and cost implications. Reassignment by CMS helps LIS enrollees maintain their premium-free PDP enrollment, but also has the potential to disrupt coverage. At the same time, LIS enrollees who are not reassigned could pay higher premiums unless they choose another premium-free plan.

This analysis is based on data from a 5-percent random sample of Medicare beneficiaries, obtained from CMS, for each year from 2006 to 2010 (see Appendix 1: Study Methodology for more information on the datasets used and definitions of variables). The dataset includes information on the characteristics of beneficiaries and Part D plan information. We obtained an additional customized dataset from CMS that indicates whether or not LIS beneficiaries are eligible for reassignment by CMS in each month. Our analysis focuses on LIS beneficiaries who are enrolled in a PDP,10 who are eligible for a full premium subsidy,11 and who are not in an employer plan. We matched LIS PDP beneficiaries across years to build four samples of beneficiaries who met these criteria throughout each of four two-year periods (2006-07, 2007-08, 2008-09, and 2009-10) and one sample of LIS beneficiaries who were enrolled in PDPs throughout the entire five-year (2006-10) period. Between 6.5 million and 6.9 million LIS PDP enrollees are represented by samples of beneficiaries meeting the qualifications for the two-year periods—compared to a total of about 8 million LIS PDP enrollees. About 4.8 million continuously enrolled LIS PDP beneficiaries are represented by the five-year sample. We compare some of the results from this analysis of LIS enrollees with results for non-LIS enrollees published in our earlier report.12

We define a change of plans during the annual open enrollment period based on enrollment in a different plan in January of the second year, compared to December of the first year. We distinguish between plan changes that reflect voluntary plan switches by LIS enrollees and changes due to reassignment by CMS. We define plan changes at other points during the year based on enrollment in a different plan in a given month compared to the previous month. In general, we do not count plan changes under two circumstances: (1) an enrollee whose plan changes during the annual enrollment period, but for whom the old plan and the new plan are matched (“crosswalked”) by the plan sponsor, and the enrollee is automatically transferred from the old plan to the new plan; and (2) an enrollee whose plan exits the program without any matched plan and who therefore has to select a new plan to remain in Part D.