In 2012, 47.3 million people in the U.S. under age 65 lacked health insurance.  Most of these individuals are in working families but do not have access to or cannot afford employer-sponsored coverage. The majority of the uninsured are low income, making it difficult for them to afford coverage on their own.  The main reason that people give for being uninsured is that they cannot afford coverage.1  Adults make up a disproportionate share of the uninsured population because they are less likely than children to be eligible for Medicaid.

More than three-quarters of the uninsured population are in working families: 63% are in families with one or more full-time workers and 16% are in families with part-time workers (Figure 5).  Many uninsured workers are not offered coverage by their employers. Workers that are offered coverage will usually enroll in employer-sponsored health insurance; however, many low and moderate income workers may find their share of the cost for coverage unaffordable, especially for non-working dependents.2  In 2013, worker contributions for employer-sponsored coverage averaged $380 per month for family coverage and $83 for individual coverage.3 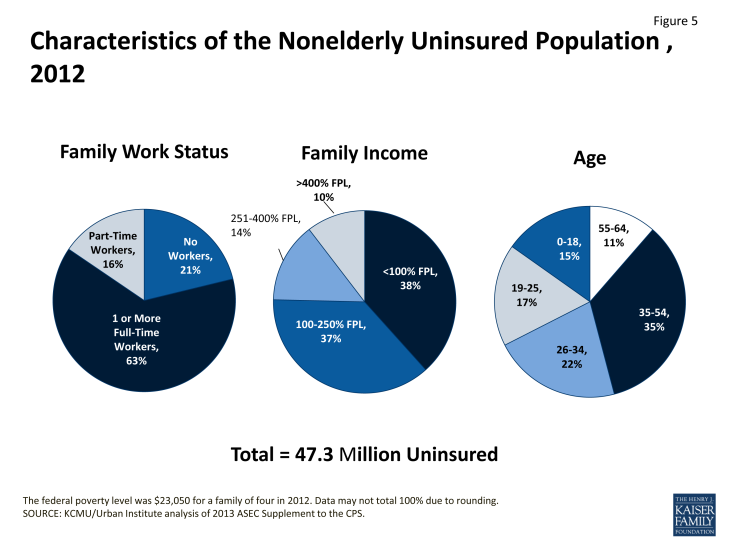 Adults are more likely to be uninsured than children.  Adults make up 71% of the nonelderly population but 85% of people without health coverage (Figure 5).  Most low-income children qualify for Medicaid or CHIP, but low-income adults under age 65 typically qualify for Medicaid only if they are disabled, pregnant, or have dependent children.  Income eligibility levels are generally much lower for parents than for children, and adults without children are generally ineligible.

Young adults, ages 19 to 25, have historically been at particularly high risk of being uninsured, largely due to their low incomes. More than half of uninsured young adults are from families with at least one full-time worker, but their low incomes (on average, $13,000 a year) make affording coverage difficult. Beginning September 2010, the ACA allowed young adults to remain as dependents under their parents’ private health insurance plans until age 26, and the number of uninsured people ages 19 to 25 has declined by approximately 3 million under this provision.4 Still, young adults account for a disproportionately large share of the uninsured.

Minorities are much more likely to be uninsured than whites.  About one-third of Hispanics and over one-fifth of black Americans are uninsured, compared to 13% of non-Hispanic whites (Figure 6).  Medicaid and CHIP are important sources of coverage for racial and ethnic minorities, covering over one-quarter of Hispanic and black Americans. However, gaps in eligibility for Medicaid leave large numbers of minorities uninsured. 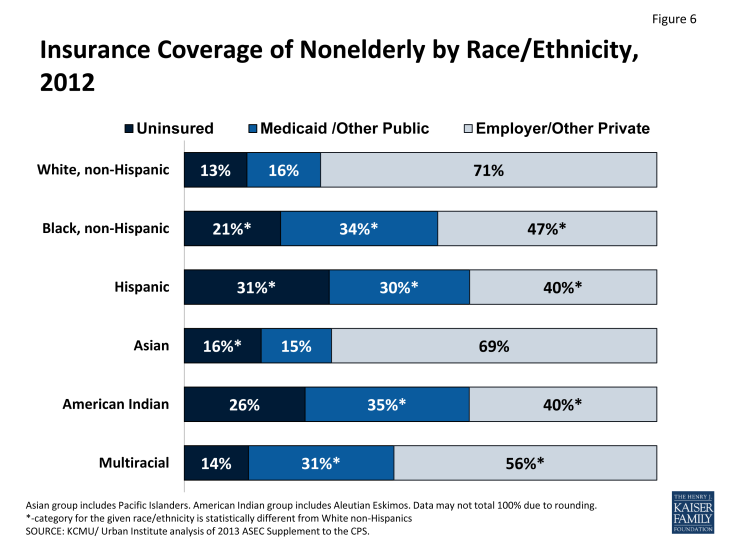 The majority of uninsured people (80%) are native or naturalized U.S. citizens.  Although non-citizens (legal and undocumented) are about three times more likely to be uninsured than citizens, they account for less than 20% of the uninsured population.5 Non-citizens have poor access to employer coverage because they are disproportionately likely to have low wage jobs or work in industries that are less likely to offer insurance.6,7 Further, in most cases, lawfully present immigrants who have been in the U.S. less than five years are ineligible for Medicaid or CHIP.  States have the option of extending Medicaid or CHIP coverage to some immigrants subject to the five-year ban, and about half of states cover lawfully-residing immigrant children (25 states) or pregnant women (20 states) who have been in the United States for less than five years.8 Undocumented immigrants will remain ineligible for federally funded health coverage under the ACA.

The uninsured population is in worse health than the privately insured population.  Uninsured adults are almost twice as likely to report being in fair or poor health as those with private insurance.9  Almost a third of all uninsured nonelderly adults have a chronic condition.10  People who have chronic conditions or poor health and who do not have access to employer-sponsored coverage may find non-group coverage to be unavailable or unaffordable. The ACA addresses this issue by imposing new regulations that will prevent health insurers from denying coverage to people for any reason, including health status, and from charging higher premiums based on health status or gender.11

More than three-quarters of uninsured people have gone without health coverage for more than a year (Figure 7).  Most uninsured adults believe they need health insurance but do not have coverage because of the cost, rather than a lack of desire to have coverage.12 Also, because health insurance is primarily obtained as an employment benefit, health coverage is disrupted when people change or lose their jobs.  When people are unable to obtain employer-sponsored coverage and are ineligible for Medicaid, they may be left uninsured for long periods of time if individual coverage is either unaffordable or unavailable due to their health status or if they work in an industry that has low offer rates. 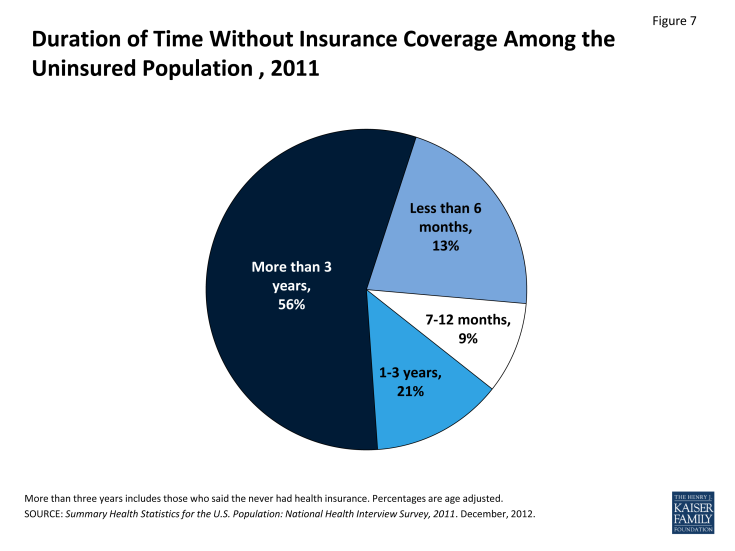 Figure 7: Duration of Time Without Insurance Coverage Among the Uninsured Population, 2011

Insurance coverage varies by state depending on the income distribution in the state, the nature of employment in the state, and the reach of state Medicaid programs.  Insurance market regulations and the availability of jobs with employer-sponsored coverage also influence the insurance rate in each state.13  Massachusetts has near universal coverage, with an uninsured rate of 4% due to health reform legislation enacted in 2006.  Seventeen states have uninsured rates over 18 percent (Figure 8). Among these are states such as Nevada, Florida, New Mexico, and Texas with uninsured rates that are 24% or higher. 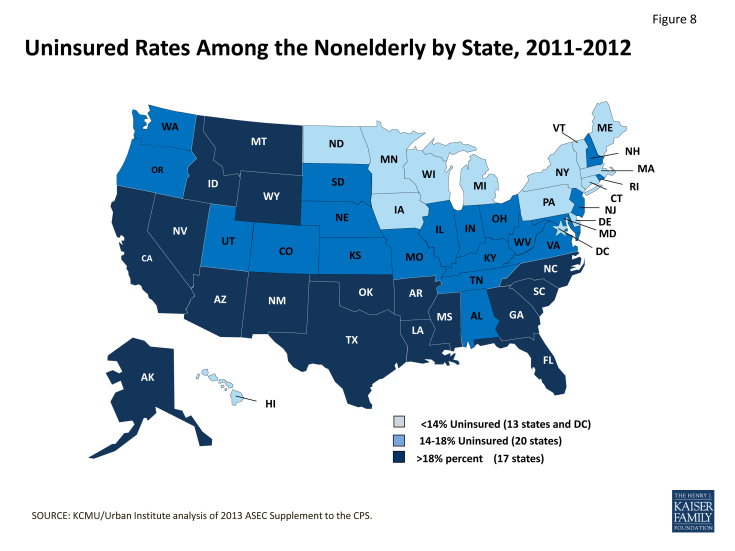