Since the Supreme Court’s 1973 decision in Roe v. Wade, abortion has been squarely in the middle of political debates at the national and state levels. Soon after the Court’s ruling, Congress enacted the Hyde Amendment, which blocks federal funds from being used to pay for abortion outside of the exceptions for rape, incest, or if the pregnancy is determined to endanger the woman’s life, resulting in dramatically limited coverage of abortion under Medicaid and other federal programs.1 Since it was first enacted over 40 years ago, the amendment has been sponsored and supported by legislators who oppose abortion and, in particular, object to the federal government’s use of taxpayer money for abortion services. The policy is not a permanent law, but rather has been attached as a temporary “rider” to the Congressional appropriations bill for the Department of Health and Human Services (HHS) and has been renewed annually by Congress. While abortion policy has been a hotly contested issue in most presidential elections, the Hyde Amendment was not the focus of these debates until the 2016 election. Following their party’s platforms, Hillary Clinton, the Democratic candidate, called for the repeal of the Hyde Amendment during the 2016 presidential election, and Donald J. Trump, the Republican candidate and current president, called for the annual provision to become permanent law.2 Leading up to the 2020 presidential election, nearly all Democratic candidates have gone on the record in their support of “repealing” of the Hyde Amendment. While the presidential candidates may have a position opposing the Hyde Amendment, any change to the policy would require approval by Congress. This brief details the federal programs that are affected by the Hyde Amendment, provides estimates on the share of women insured by Medicaid affected by the law, reviews the impact of the law on their access to abortion services, and discusses the potential effect if the law were to be repealed.

What programs does the Hyde Amendment affect?

Initially, the Hyde Amendment only affected funding for abortions under Medicaid, a state and federal health program for low-income individuals. Because Congress reauthorizes the Hyde Amendment annually as an attachment to the appropriations bill for HHS, it also restricts abortion funding under the Indian Health Service, Medicare, and the Children’s Health Insurance Program. Over the years, language similar to that in the Hyde Amendment has been incorporated into a range of other federal programs that provide or pay for health services to women including: the military’s TRICARE program, federal prisons, the Peace Corps, and the Federal Employees Health Benefits Program. The Affordable Care Act (ACA) also included a provision that applied similar abortion coverage limitations to plans that are sold through the Marketplace for women who receive federal income-based subsidies to purchase private health insurance.

Because Medicaid is jointly funded by the federal and state governments, states can choose to pay for abortions under Medicaid in other instances, but must use their own revenues, and not federal funds, to cover the service. Currently, 16 states have a policy directing the use of their own funds to pay for abortions for low-income women insured by Medicaid beyond the Hyde limitations, 9 of which provide coverage as the result of a court order (Figure 1). The Arizona Medicaid program, however, does not pay for abortions outside of circumstances permitted by Hyde despite court orders directing them to do so. 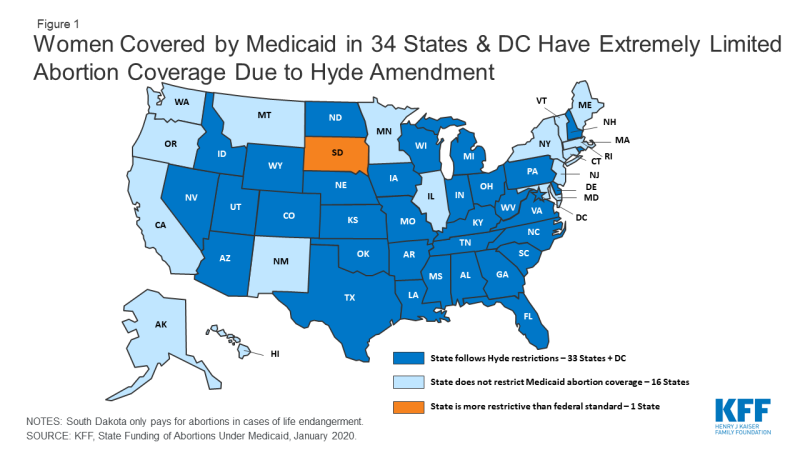 What is the Hyde Amendment’s impact on women on Medicaid?

Medicaid is a significant and growing source of health coverage for low-income women in the nation. Today, Medicaid covers two in ten women of reproductive age (15-49 years). In 2018, half (50%) of women below the Federal Poverty Level (FPL) were insured by Medicaid (Figure 2).3 The ACA has enabled states to increase eligibility for Medicaid to 138% of the FPL ($27,579 for a family of three in 2018).  However, 14 states have not expanded the program4. 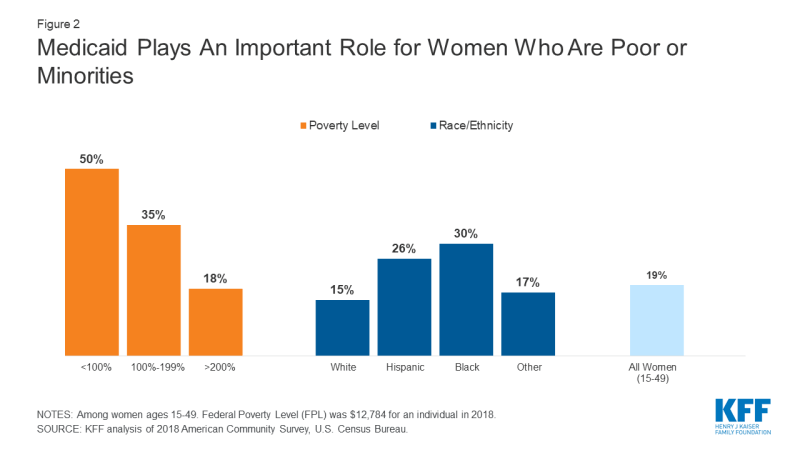 Figure 2: Medicaid Plays An Important Role for Women Who Are Poor or Minorities

Despite the news that unintended pregnancy and abortion rates have fallen in the general population, abortions are becoming increasingly concentrated among poor women and black women. Women of color are more likely than white women to be insured by Medicaid, and have higher rates of unintended pregnancy and abortion. In 2014, 75% of abortions were among low-income patients, and 64% were among black or Latina women (Figure 3).5 Young adults and teens, who are less likely to have a steady source of income, make up the majority (72%) of abortion patients.6 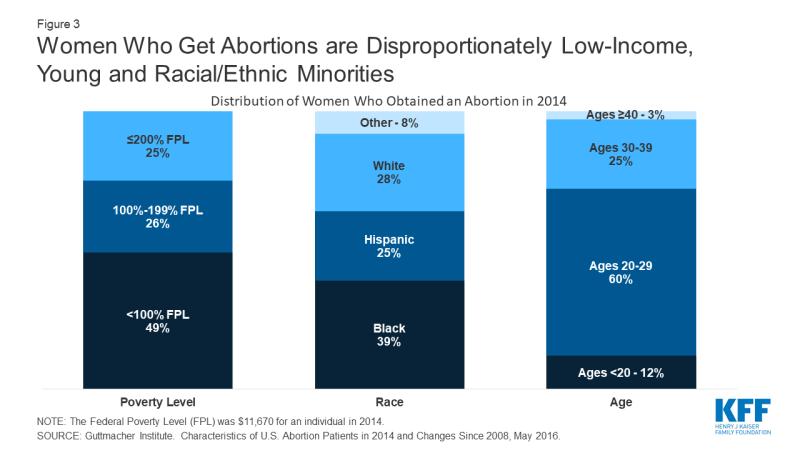 Figure 3: Women Who Get Abortions are Disproportionately Low-Income, Young and Racial/Ethnic Minorities

Without coverage for abortion under Medicaid, women must pay out-of-pocket for the procedure. Costs vary by location, facility, and gestational age, but on average in 2014 an abortion cost between $500 at 10 weeks gestation, while at 20 weeks gestation, costs soared to $1195 or more.7 Abortion costs are higher in states with more restrictive policies.8 Women covered by Medicaid in states that use state funds to pay for abortion have no out of pocket costs for abortion.9 Though the vast majority (~90%) of abortions are performed in the first trimester of pregnancy, the costs are challenging for many low-income women. The Turnaway Study found that women who received an abortion at any gestational age faced logistical barriers including difficulty finding a provider, and raising funds for the procedure and travel, but these barriers were more common and had greater consequences for women seeking an abortion at or after 20 weeks gestation. It is more difficult to find a provider for an abortion at or after 20 weeks gestation, and the procedure is more expensive.  Approximately 5% of abortions are performed at 16 weeks or later in the pregnancy.10 For women with medically complicated health situations or who need a second-trimester abortion, the costs could be prohibitive. In some cases, women find they have to delay their abortion while they take time to raise funds11 or in other cases, women are not able to obtain abortions because they cannot afford the costs of the procedure.12 Furthermore, women who first learn of a fetal anomaly in the second trimester when the costs are considerably higher can face significant costs if they seek to terminate a pregnancy that may not be viable.13 According to the Federal Reserve Board, 40% of U.S. adults do not have enough savings to pay for a $400 emergency expense.

A 2019 GAO study of state policies regarding Medicaid coverage of abortion found that South Dakota’s Medicaid program only covers abortions in the case of life endangerment, but not in the cases of rape or incest, in violation of federal law. The same study also found that 14 state Medicaid programs do not cover Mifeprex, the prescription drug most commonly used for medication abortions.14 All 14 of these states only pay for abortions in the circumstances permitted by the Hyde Amendment. The only option for women enrolled in Medicaid in these states is to obtain a surgical abortion in the cases of rape, incest, and life endangerment. To date, CMS has not taken any action against these 14 states for failing to comply with the outpatient drug requirements or against South Dakota for not covering abortion in all of the circumstances required by Hyde.15 Furthermore, while 37 states reported that their Medicaid programs cover Mifeprex, only 13 of these states have actually requested a Medicaid rebate for this drug. In the other states, the program had not paid for this drug for a patient in the last three years, indicating that medication abortions may be very limited in these states.

The GAO study also found that states have a variety of invasive requirements for women claiming abortion coverage under Hyde including: provider certification of rape, incest, or life endangerment; beneficiary certification of rape or incest; documentation (such as police report or report with a public health agency) of rape or incest; prior authorization; and prior certification of counseling for the abortion. Since 2013, Iowa has required formal approval from the Office of the Governor in order to secure reimbursement for any abortions covered by Medicaid. Between 2013 and 2017, South Dakota, Iowa, and Wyoming did not report paying for any abortions eligible for federal funding (Appendix Table 2).

What would be the impact on abortion coverage if the Hyde Restrictions were lifted?

As a rider to the annual appropriations bill that Congress must pass in order to fund the operations of federal programs, the Hyde Amendment affects millions of women. For example, if the ban were to have been lifted in 2018, it could have provided federal support for abortion coverage for 14.2 million reproductive-age women enrolled in Medicaid, as well as millions of others in similarly restricted federal programs. In particular, it would have potentially broadened abortion coverage for 7.7 million women on Medicaid who lived in states (Appendix Table 1) that followed Hyde restrictions, which represented over half (55%) of reproductive-age women enrolled in Medicaid in 2018 (Figure 4).16  For many low-income women, the lack of Medicaid coverage for abortion is effectively an abortion ban.  A recent study estimated that 29% of pregnant Medicaid-eligible women in Louisiana would have had abortions instead of giving birth if Medicaid covered abortions. Not surprisingly, states that do not use state funds to cover abortions outside of the Hyde limitations, pay for substantially fewer abortions. In 2014, 52% of abortion patients residing in states that use their own funds to pay for abortion had the procedure covered by Medicaid, compared to 1.5% of patients who live in states adhering to Hyde restrictions.17 This stark differential strongly suggests that if abortion coverage was to be expanded under Medicaid, more women would qualify for abortion coverage and the number of abortions paid for by the program would rise. However, the extent of the change in Medicaid-funded abortions would likely vary considerably by state as it would be affected by a range of factors including state laws, reimbursement rates, and the availability of providers. For example, some states already have (or could enact) laws that prohibit state dollars from being used for abortion in the same way that they now ban coverage through private plans and the ACA Marketplace plans.  Advocates who support abortion rights are working to counteract these efforts through federal legislation such as the EACH Woman Act, which would prohibit the federal and state governments from restricting insurance coverage for abortion in both public and private health insurance programs. Advocates who oppose abortion are working to make Hyde permanent law and are endorsing the passage of legislation such as amending Title I8 of the United States code, to prohibit abortion in cases where a fetal heartbeat is detectable. 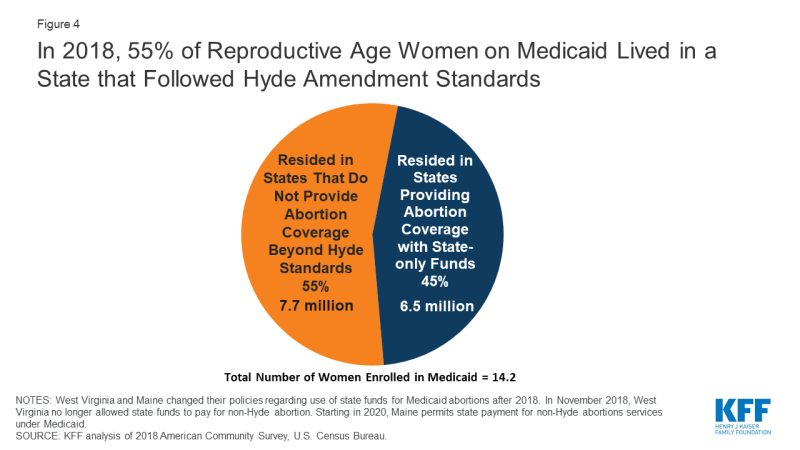 Figure 4: In 2018, 55% of Reproductive Age Women on Medicaid Lived in a State that Followed Hyde Amendment Standards

The removal of the Hyde Amendment from the appropriations bill would also affect an estimated 1.33 million women under the age of 50 enrolled in Medicare,18 and many others who receive their care through the Indian Health Service and the Children’s Health Insurance Program. In order for women in the military and the Peace Corps, federal employees, and others who are receiving federally funded health benefits (outside of the HHS Appropriations bill) to obtain abortion coverage, the Hyde-like provisions would either need to be repealed from the authorizing law or lifted from the Congressionally approved appropriations bills that fund those federal programs.

Despite higher shares of women with private insurance and Medicaid resulting from the coverage expansions established by the ACA, coverage for abortion services remains limited. While the removal of the Hyde Amendment could broaden this abortion coverage for millions of low-income women who receive federally subsidized health coverage, the true impact of such a policy change would vary by program and state. Forty years after the first time the Hyde Amendment was first applied to a federal appropriations bill, the law is still being debated reflecting the polarized nature of the abortion debate in the United States.