Seniors and people with disabilities or chronic illnesses may need long-term services and supports (LTSS) for help with self-care tasks (such as eating, bathing, or dressing) and household activities (such as preparing meals, managing medication, or housekeeping). Medicaid is the primary payer for LTSS, covering over half of national spending on nursing home care and home and community-based services (HCBS) as of 2017.1 To financially qualify for Medicaid LTSS, an individual must have low income and limited assets. When one spouse in a married couple needs LTSS, Medicaid spousal impoverishment rules protect some income and assets to support the other spouse’s living expenses, in an effort to prevent her “financial devastation from paying the high cost of [her spouse’s] nursing home care.”2

This issue brief answers key questions about the spousal impoverishment rules,6 presents new data from a 2019 Kaiser Family Foundation (KFF) 50-state survey about state policies and future plans in this area, and considers the implications if Congress does not extend Section 2404. 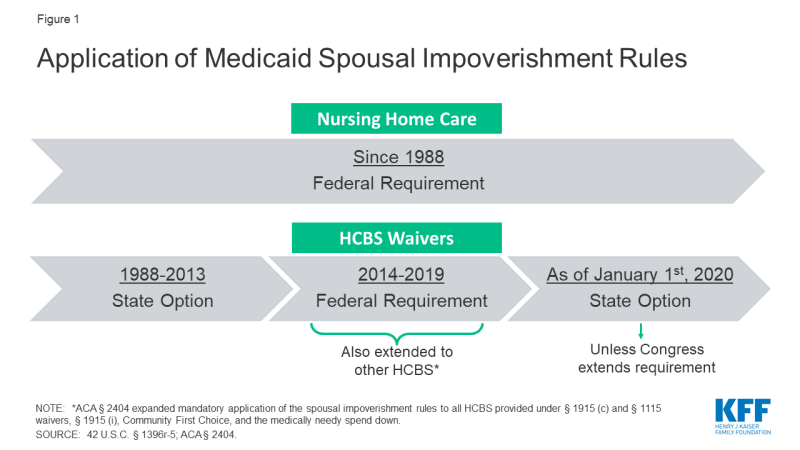 1. What are the general Medicaid LTSS financial eligibility rules?

Once eligible for Medicaid LTSS, individuals generally must contribute a portion of their monthly income to the cost of their care. These “post-eligibility treatment of income” (PETI) rules apply to both nursing home services and HCBS waivers. For those in nursing homes, a small “personal needs allowance” is permitted to pay for items not covered by Medicaid, such as clothing;12 the federal minimum personal needs allowance is $30 per month and the state median was $50 per month in 2018.13 Individuals in the “217-group” are subject to PETI under HCBS waivers and may have a higher “maintenance needs allowance,” recognizing that individuals living in the community must pay for room and board. There is no federal minimum for HCBS maintenance needs; instead, states may use any amount as long as it is based on a “reasonable assessment of need” and subject to a maximum that applies to all enrollees under the waiver.14

Congress created the spousal impoverishment rules in 1988, to protect a portion of a married couple’s income and assets to support the “community spouse’s” living expenses when the other spouse sought Medicaid LTSS. The spousal impoverishment rules supersede rules that would otherwise require eligibility determinations to account for a spouse’s financial responsibility for a Medicaid applicant or beneficiary.15 They were enacted “in response to evidence that at-home spouses – typically elderly women with little or no income of their own – faced poverty and a radical reduction in their standard of living before their spouses living in a nursing home could qualify for Medicaid.”16 Prior to the spousal impoverishment rules, “married individuals requiring Medicaid-covered LTSS were commonly faced with either forgoing services or leaving the spouse still living at home with little income or resources.”17

Concerns about potentially financially devastating LTSS costs that motivated Congress to add the spousal impoverishment rules to Medicaid 30 years ago remain relevant today. LTSS costs are difficult for most people to afford out-of-pocket, and private insurance coverage of LTSS is limited. In 2019, a year of nursing home care averages over $90,000; average annual home health aide services cost over $52,000; and average annual adult day health care services total nearly $20,000.18 As in 1988, the high cost of LTSS “can rapidly deplete the lifetime savings of elderly couples”19 today. The spousal impoverishment rules “help ensure. . . that community spouses are able to live out their lives with independence and dignity.”20 While the amounts protected under the rules (discussed below) might be considered “quite modest or even inadequate to sustain the at-home spouse’s accustomed standard of living, they far exceed the income and asset levels that may be retained in the case of unmarried recipients of Medicaid long-term care services”21 (described above, e.g., typically $2,000 in countable assets and a minimum of $30 monthly personal needs allowance for nursing home enrollees).

Since 1988, Congress has required states to apply the spousal impoverishment rules to long-term nursing home services to provide financial support for the “community spouse.”22 Specifically, states must disregard a portion of income and assets at two points when a married individual is seeking nursing home services: (1) when determining and renewing the individual’s Medicaid financial eligibility; and (2) when determining the individual’s monthly required contribution to his care costs under the PETI rules (Figure 2). The rules apply to long-term nursing home stays, which are those expected to last at least 30 consecutive days.23 The spousal impoverishment rules apply when a married individual seeks or receives Medicaid LTSS, and his spouse is not in a nursing home or other medical institution.24 The rules do not apply when both spouses seek long-term Medicaid nursing home care.25 The amounts protected under the spousal impoverishment rules are updated annually and are in addition to the general Medicaid LTSS income and asset limits described above. Box 1 provides additional detail about how protected amounts are determined under the rules. 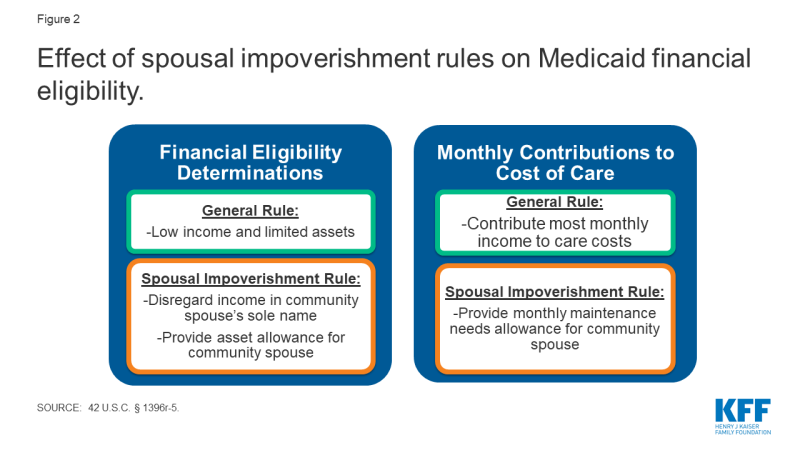 4. How Did ACA Section 2404 change the Medicaid spousal impoverishment rules?

Section 2404 currently requires states to apply the spousal impoverishment rules to Medicaid HCBS waivers from January 1, 2014 through December 31, 2019. Under the ACA, Section 2404 was set to expire on December 31, 2018, but Congress has temporarily extended the provision first through March 31, 2019, then through September 30, 2019, and most recently through December 31, 2019. Section 2404 removes the state option for applying the rules to HCBS waivers and instead makes the rules mandatory for determining both financial eligibility and PETI when a married individual seeks Medicaid home and community-based waiver services.41

If Section 2404 expires, over three-quarters (40 of 51) of states plan to continue applying the spousal impoverishment rules to at least some HCBS waiver populations (the 217-group), while five states’ plans were unknown at the time of our survey.45 Among the 40 states with plans to continue the spousal impoverishment rules for 217 waiver groups, all will apply them to eligibility determinations, 30 states will apply them to PETI, and 29 states will apply them to both determinations. Some state responses varied by waiver program. For example, 14 states were uncertain of continuation plans for at least one HCBS waiver.46 If the Section 2404 requirement expires, states will have the option to continue to apply the rules to the 217-group covered under Section 1915 (c) HCBS waivers.

Fourteen states report that the expiration of Section 2404 would have an impact on financial eligibility for individuals currently enrolled under HCBS waivers.52 Among these states, 10 expected that fewer individuals would be eligible for waiver services;53 five expected that more individuals would have a higher share of cost requirement under the PETI rules;54 and five expected that at least some waiver enrollees potentially would have to move to institutions due to loss of HCBS eligibility.55 Michigan indicated that the expiration of spousal impoverishment protections would result in 3,000 fewer individuals eligible under an HCBS waiver serving seniors and adults with physical disabilities. Without Section 2404, the spousal impoverishment rules will revert to a state option for HCBS waivers and will no longer apply to HCBS provided under other Medicaid authorities, unless states obtain a Section 1115 waiver, as of January 1, 2020.

Eight states report that the repeated temporary extensions of Section 2404 to date have affected the state and/or HCBS waiver enrollees. Among these states, six indicated confusion among waiver enrollees,56 and five noted increased staff workload.57 One state reported that state staff were unable to focus on other priorities due to the need to redetermine waiver eligibility and PETI in advance of the expiration date,58 while two states reported other impacts.59 Each time that the date on which Section 2404 was set to expire approached, states must redetermine enrollees’ financial eligibility, and if applicable PETI, without applying the spousal impoverishment rules, and send notice of any changes to enrollees before the expiration date, according to the CMS guidance described above. At minimum, states must do this for non-217 waiver enrollees, Section 1915 (i) enrollees, and CFC enrollees. States also must do this for the 217-group if they do not elect the option to continue to apply the rules. Then, each time after Congress enacted another temporary extension, states had to notify enrollees that the anticipated changes would not take effect, redetermine financial eligibility and PETI, this time applying the spousal impoverishment rules, and again send enrollees notice of any changes. This cycle has been repeated for scheduled expirations in December 2018, April 2019, September 2019, and December 2019,

Applying the same financial eligibility rules to Medicaid nursing facility care and HCBS helps alleviate bias in favor of institutional care.60 If financial eligibility limits are less stringent for nursing home care than for HCBS, an individual in need of LTSS may qualify only for institutional care. Even if an individual financially qualifies for both nursing home care and HCBS, he may be incentivized to choose nursing home care if that option will protect additional income and assets to support his spouse at home, due to differential application of the spousal impoverishment rules.

Applying more stringent income and asset rules to HCBS, compared to nursing home care, could impact the progress that states have made in expanding access to HCBS. The share of Medicaid LTSS spending devoted to HCBS instead of institutional care has been steadily increasing in recent decades. A majority of Medicaid LTSS spending went to HCBS for the first time in 2013, and reached 57% in 2016 (Figure 3). Although not required by federal Medicaid law, states have an independent community integration obligation under the Americans with Disabilities Act (ADA) when administering services, programs, and activities.61 The Supreme Court’s Olmstead decision found that the unjustified institutionalization of people with disabilities is illegal discrimination under the ADA, and Medicaid plays a key role in helping states meet their community integration obligations.62 Applying financial eligibility rules to HCBS that are more restrictive than those for institutional care could be challenged under the ADA, even if permitted by Medicaid law. 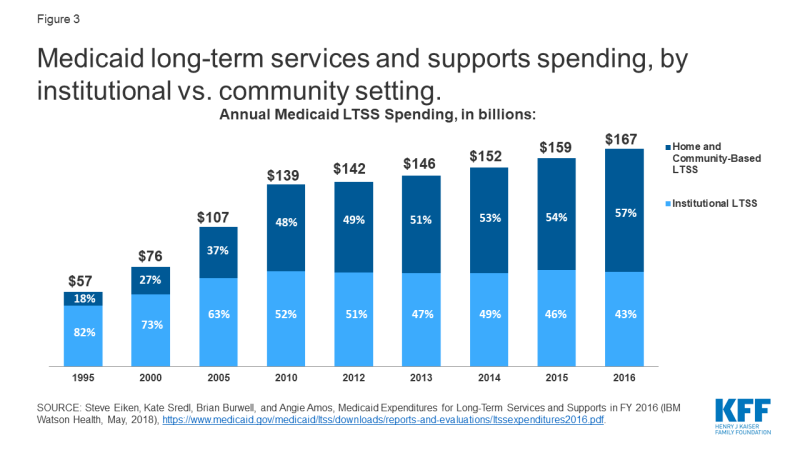 Congress could consider legislation to extend Section 2404 in the coming weeks, before the provision expires at the end of December 2019. There does not appear to be a substantive debate over the issue like with other health programs, but there are always competing demands for federal funding. Section 2404’s original expansion of the spousal impoverishment rules in the ACA likely was time limited due to an effort to control costs. The Congressional Budget Office (CBO) estimated the cost of the temporary extension of Section 2404 at $22 million for January through March 2019 at $22 million63 and $46 million for April through September 2019.64 CBO estimated that a longer-term extension, for 5 years from October 2019 through March 2024, would cost $331 million;65 Congress subsequently amended this bill to extend the rules from October through December 2019.

If reauthorized, the rules would provide stability and continuity for enrollees receiving HCBS and for states administering Medicaid eligibility determinations and renewals, while increasing federal and state budgetary costs over and above the current baseline. If Section 2404 expires, several states have indicated their plans to continue to apply the spousal impoverishment rules to some or all HCBS waivers are unknown. Though most states are planning to continue to apply the rules at this time, without Section 2404 or a similar requirement, states could stop doing so at any time by submitting an HCBS waiver amendment.66 Additionally, without Section 2404, states lack legal authority to apply the rules when determining financial eligibility for HCBS under other authorities, including waiver enrollees other than the 217-group, Section 1915 (i), CFC, and spend down pathways, and would have to devote time and resources to obtaining and administering a Section 1115 waiver to be able to treat financial eligibility for all HCBS equally.67 To date, few states plan to seek such a waiver. Applying different Medicaid financial eligibility rules to institutional LTSS and HCBS could affect states’ progress in expanding access to HCBS, rebalancing LTSS spending, and promoting community integration.