The Congress is currently debating the American Health Care Act (AHCA), which would not only repeal and replace the Affordable Care Act (ACA) but also make far-reaching changes to the structure and financing of Medicaid. The AHCA would use a per capita cap policy or block grants to cap federal funds to states for Medicaid. Facing reductions in federal Medicaid funding, states could offset lost federal dollars by raising taxes or reducing other state spending (like K-12 education), or states could reduce spending in Medicaid by finding savings or (more likely) by restricting eligibility, benefits, or payments to providers. However, many efficiencies were adopted by state Medicaid programs during the last two major recessions when revenues dropped and budgets were constrained leaving states with few options for easy ways to trim additional spending in the future. On March 13, 2017 the Congressional Budget Office (CBO) estimated that the AHCA would reduce federal Medicaid spending by $880 billion over the 2017-2026 period. By 2026, Medicaid spending would be about 25% less than what CBO projects under current law.

In this analysis, we examine the fiscal implications of state actions to offset the loss of federal Medicaid funding to maintain rather than cut Medicaid programs. This analysis is intended to be illustrative and not predictive of actual state outcomes. In contrast, the CBO estimate of a 25% reduction in federal Medicaid funding by 2026 reflects projections and accounts for federal changes in policy, state responses to the policy change, and reductions in coverage.

What does this analysis do? In this analysis, we present three scenarios of reductions in federal Medicaid spending and examine fiscal implications if all reductions had been in full effect in FFY 2015 (the most recent year for which Medicaid spending data is available). In these scenarios, we assume states fill the gaps caused by federal funding reductions by increasing state spending for Medicaid. To achieve those increases, we examine potential implications for state taxes and education spending by state and by groups of states including expansion status, political party, region and poverty quartile and highlight the groups that could experience the largest effects. These results are illustrative: each state would likely make different policy choices, and states could implement a combination of approaches, or choose not to completely offset the federal reduction.

What does this analysis not do? Unlike the CBO estimates, this analysis does not make projections or anticipate changes to state Medicaid programs through reducing eligibility levels, benefits, or reimbursement rates. If states do undertake these changes to their Medicaid programs, federal reductions would likely be larger. This analysis of the impact in FFY 2015 does not assume that states will drop coverage and does not account for states that may have adopted the expansion in the future.

What are the potential implications for state taxes and education? States could choose to respond in many ways. For example, they could raise taxes or reduce education spending to fill in gaps in federal funding for Medicaid. Median state tax per resident was $2,715 in 2015. If states opt to raise taxes, the median increase in state taxes per resident would range from 3.5% to 8.1% under the three scenarios; if states increased the largest state tax, the median would range from 8.4% to 18.1%. For most states (29 states), the income tax is the largest state tax followed by sales tax (15 states). Median total spending per pupil for education was $10,961 in 2015. If states opted to fill the gap by reducing state government spending for education, states could face median reductions in state funding for K-12 education per pupil of 10.9% to 24.1% and total funding for K-12 education spending per pupil of 5.5% to 13.7%.

How are different groups of states affected by reductions? Due to the changes in the enhanced match rate, states that have adopted the Medicaid expansion will experience larger federal funding reductions; this outcome is true across states with Republican and Democratic governors. For example, in the scenario that would repeal the ACA enhanced match rate and reduce traditional Medicaid spending by 20%, expansion states would face higher median tax increases and larger reductions in education to fill the federal funding gaps compared to non-expansion states (ES 1). This increased budget pressure could make it difficult for states to maintain the Medicaid expansion. Funding reductions that go beyond eliminating the enhanced match for the ACA Medicaid expansion and entail cuts to the traditional Medicaid program could have a disproportionate effect on states with high poverty. Even though these poorer states spend less per resident on Medicaid, their federal reimbursement rate is relatively high, and so the impact of federal cuts is large. 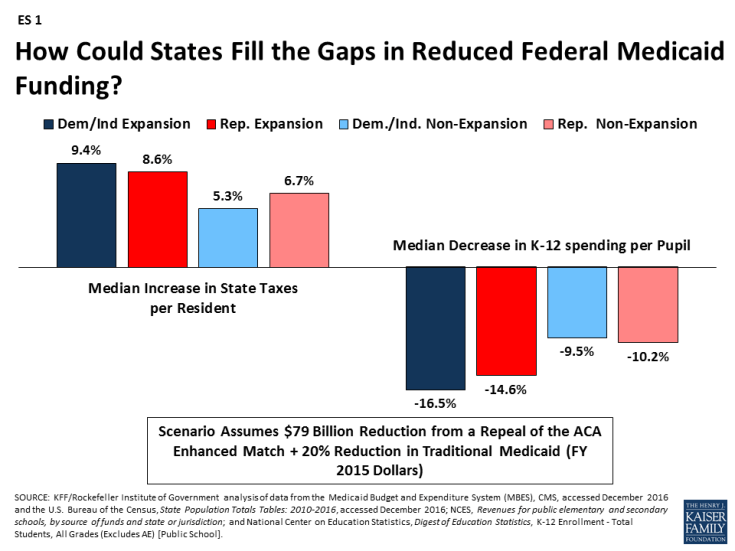 Figure ES1: How Could States Fill the Gaps in Reduced Federal Medicaid Funding?