Access to family planning (FP) services has a significant impact on the health and wellbeing of women and girls, and on global health and development more broadly. Family planning – the ability of individuals and couples to determine their desired number of children as well as the timing of and spacing between births – can help prevent pregnancy-related health risks, reduce infant mortality, and help in the prevention of sexually transmitted diseases such as HIV/AIDS.1 Currently, it is estimated that more than 200 million women worldwide would like to delay or stop childbearing, but they do not have access to contraceptives.2

In July 2012, the U.K. Government and the Bill & Melinda Gates Foundation, in partnership with UNFPA, civil society organizations, developing countries, donor governments, the private sector, and multilateral organizations met at the London Summit on Family Planning (FP2020) and made commitments aimed at providing voluntary family planning services to an additional 120 million women and girls in developing countries by 2020. The London Summit built on prior efforts, such as the International Conference on Population and Development (ICPD) in 1994 and inclusion of family planning related goals under Millennium Development Goal (MDG) 5, and brought renewed attention to international efforts to support family planning programs in low- and middle-income countries. Additionally, the London Summit resulted in stated commitments totaling $2.6 billion in additional funding for family planning activities from all sources (donor governments, non-governmental organizations, philanthropies, multilateral organizations, and domestic resources).

While funding from all sources – domestic public and private spending, donor government bilateral assistance, multilateral organizations and private philanthropic (see Box 1) – is needed to help fulfill international goals and commitments, donor governments provide a significant share of global funding for family planning services.3 Following the London Summit, the Kaiser Family Foundation conducted an analysis of donor government funding for family planning activities in 2012 to establish a FP funding baseline that could be used to track funding levels over time as well as specific donor government progress in meeting the London Summit on Family Planning commitments.

Box 1: Other Sources of Funding for FP in Low- & Middle-Income Countries

While this report focuses on donor governments, there are three other major funding streams for FP assistance: multilateral organizations, the private sector, and domestic resources.

Private Sector: Foundations (charitable and corporate philanthropic organizations), corporations, faith-based organizations, and international non-governmental organizations (NGOs) provide support for FP activities in low- and middle-income countries not only in terms of funding, but through in-kind support; commodity donations; and co-investment strategies with government and other sectors.

Domestic Resources: Including both spending by country governments that also receive international assistance for FP and by households/individuals within these countries, represent a significant and critical part of the response.

This report provides donor government funding for family planning activities in 2013 compared to 2012 levels. It includes an analysis of funding provided by the 26 governments who were members of the OECD DAC in 2013 and had reported ODA totals to the DAC.4 Data were collected directly from ten donors, who represent approximately 98% of bilateral family planning funding, and are profiled in this report: Australia, Canada, Denmark, France, Germany, Netherlands, Norway, Sweden, the U.K., and the U.S. Data for the remaining DAC members was obtained from the OECD CRS. For purposes of this analysis, family planning services were defined to include the following activities as specified in the CRS: counseling; information, education and communication (IEC) activities; delivery of contraceptives; capacity building and training.5 Where bilateral family planning funding was included as part of broader reproductive and maternal health activities or other non-health-sector activities, we worked directly with donor governments to identify family planning specific amounts to the extent possible (see Methodology for more information).

In 2013, donor governments are estimated to have disbursed6 US$1,307.8 million in bilateral funding for family planning activities (see Table & Annex 1), an increase of $211.4 million (19%) above 2012 levels (US$1,096.4 million). This includes both actual funding amounts provided (e.g., cash transfers) as well as other types of transactions and activities (e.g., technical assistance) and products (e.g., commodities).

Most donor governments profiled (7) (Canada, Denmark, Netherlands, Norway, Sweden, U.S., and U.K.) increased bilateral funding in 2013 (after exchange rate fluctuations are taken into account); one donor (Australia) remained essentially flat and two donors (France and Germany) decreased funding for family planning in 2013. Most of the overall increase was due to increases in funding by the U.S., the U.K., and the Netherlands. 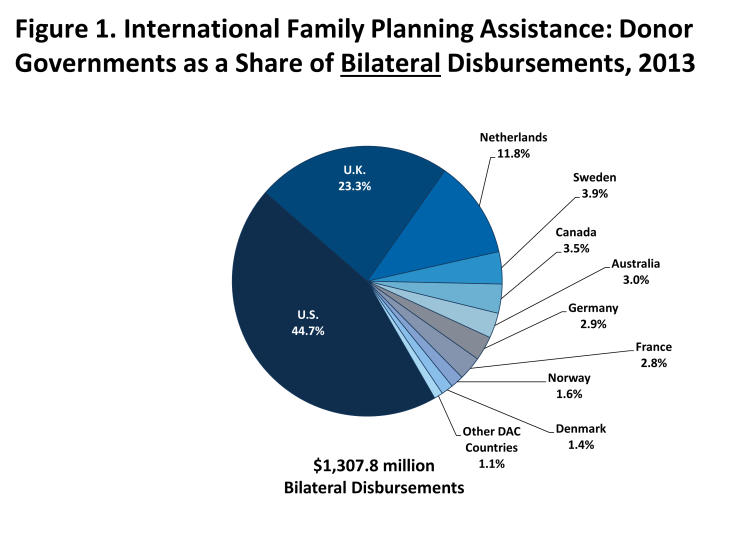 Created in 1969, UNFPA supports sexual and reproductive health activities in many low- and middle-income countries and was a key partner in the London Summit on Family Planning
–
UNFPA Mission: Deliver a world where every pregnancy is wanted, every birth is safe, every young person’s potential is fulfilled.
–
UNFPA Goals:
UNFPA London Summit on Family Planning Commitment: “UNFPA will double the proportion of its resources focused on family planning from 25% to 40 % based on current funding levels, bringing new funding of at least US $174 million per year from core and noncore funds. This will include a minimum of US $54 million per year, from 2013-2019, in increased funding for family planning from UNFPA’s core resources.”

In 2013, donor governments provided US$454.0 million in core contributions to UNFPA, an increase of US$21.8 million (5%) above 2012 levels (US$432.2 million).8 UNFPA uses core contributions to support a variety of activities including family planning, but also in support of maternal and child health, education, human rights, and capacity building efforts. 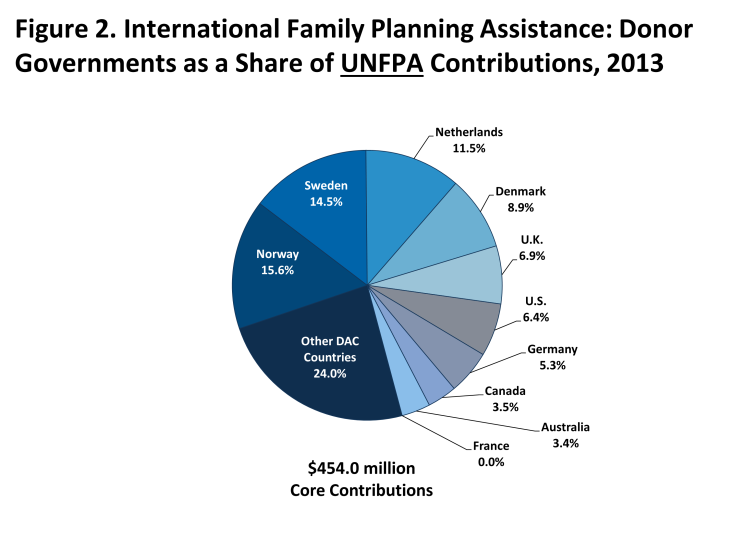 While it was not possible to calculate an adjusted “family planning share” of UNFPA’s 2013 budget and therefore to attribute a portion of each donor government’s UNFPA contribution to family planning-specific activities,10 it is important to note the relative balance between a donor’s core-contributions to UNFPA and its bilateral funding for family planning. For instance, three of the ten donor governments profiled provided a larger contribution to UNFPA than their bilateral disbursement: Denmark, Norway, & Sweden.

Eight of the donor governments surveyed directly made multi-year commitments at the FP2020 Summit in 2012 (see Appendix 2). While it is not possible to know what funding amounts would have been provided by donors in the absence of the Summit, data collected for 2012-2013 indicate that if current trends continue, all eight have made progress toward their stated commitments. Future analyses will continue to monitor funding disbursed towards these commitments.