Marketplace premiums under the Affordable Care Act (ACA), already a subject of perennial interest, have gained even more attention amid unfavorable financial results from some insurers, as well as initial reports of steep premium increases requested for 2017. Several factors will influence how premiums will change in 2017, and there is reason to believe that increases will be higher than in recent years.

Many of the initial reports of premium increases for 2017 have been based on anecdotal examples or averages across insurers. This brief takes a different approach, presenting an early analysis of changes in insurer participation and premiums for the lowest-cost and second-lowest silver marketplace plans in major cities in 16 states plus the District of Columbia where complete data on rates is publicly available for all insurers. Using this information, we are able to calculate the premium a specific person might pay without a premium tax credit, and take into account new plans entering the market. It follows a similar approach to our analyses of 2014, 2015, and 2016 marketplace premiums. The two lowest-cost silver plans are significant because they are the most common plan choices in the marketplaces, and the second lowest-cost plan is the benchmark used to calculate government premium subsidies.

In preparation for open enrollment in 2017, insurers have filed premium requests with state insurance departments. States vary in whether and when they release those filings. In this analysis, we analyze premium data from all 16 states and the District of Columbia where either public insurer filings include all of the information necessary to calculate the premium for a 40-year-old living in specific part of the state, or, where the state has made similar information public in some other format such as rate tables or search tools. Other states have released summary information, but not sufficient detail to identify the two lowest-cost silver plans.

We examine premiums in a rating area that includes a major city in each state. Premiums vary significantly within states, with the rating area being the smallest geographic unit by which insurers are allowed to vary rates. For each rating area, we look at premiums for the two lowest-cost silver plans. We focus on silver plans because they are the basis for federal premium subsidies1 and because these are the plans that most marketplace enrollees (68%) tend to choose. These cities represent major population centers in each state; premiums and insurer participation may be different in rural areas. These premiums are still preliminary and subject to review by the state or federal government.

Changes in the Lowest-Cost Silver Plans

Across the 17 cities we examined, the premium for the lowest-cost silver plan is increasing by a weighted average of 9% in 2017, though changes vary geographically ranging from a decrease of 14% in Providence, Rhode Island, to an increase of 27% in Nashville, Tennessee. 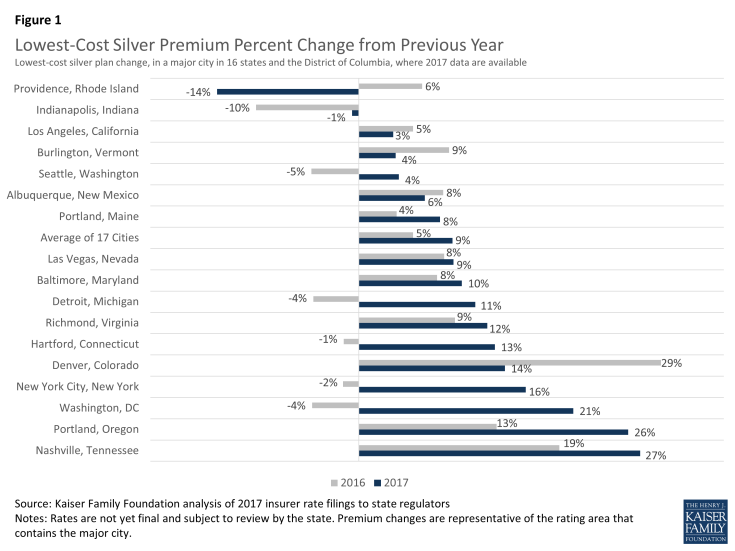 From the creation of the exchange markets in 2014 to 2017, the lowest-cost silver premium will have increased an average of 7% per year across these 17 areas, if 2017 proposed rates are not changed through the review process. Average annual growth in the lowest-cost silver plan in these cities ranges from a decrease of 6% per year in Indianapolis, Providence, and Seattle, to an increase of 23% in Nashville, Tennessee.

Changes in the Second-Lowest Silver Plans 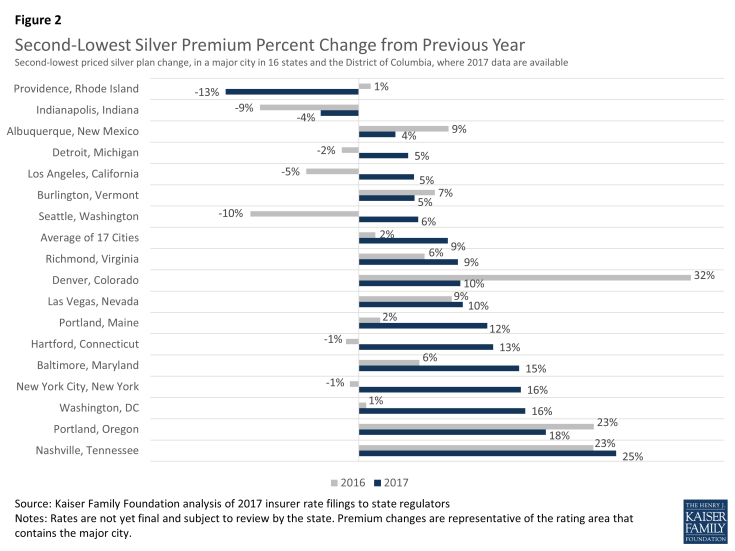 In 2016, a 40-year-old single enrollee making $30,000 per year would have paid about $208 per month in most areas of the country, and a similar person would pay approximately the same in 2017. (Although premium caps are increasing for 2017, the poverty guidelines are also changing such that a single person making $30,000 will be at a slightly lower percent of poverty than he or she would be this year. These two changes in effect cancel each other out, leaving monthly payments for the benchmark plan very similar from year-to-year.) However, in order to take advantage of this stability in premium payments, enrollees may need to switch plans to the new benchmark silver plan.

As was the case last year, the insurers that had the lowest premiums in 2016 are often no longer one of the two lowest-cost silver plans in 2017. This underscores the importance of enrollees actively shopping each open enrollment period. For example, in Providence, Rhode Island, Blue Cross Blue Shield (BCBS) of Rhode Island offered the second-lowest silver plan in 2016 at a premium of $263 per month for a single 40 year-old before taking a tax credit into account. BCBS is increasing this plan’s rate to $272 per month for 2017, but another insurer, Neighborhood Health Plan, is offering a few lower-cost silver options – the lowest for $224 per month and the second-lowest for $229. An unsubsidized person enrolled in the 2016 second-lowest silver plan offered by BCBS would see a premium increase of about 4% if she stayed in the same plan. Conversely, if she switched to the new second-lowest silver plan offered by Neighborhood, her premium would drop 13% (before accounting for the relatively small effect aging up a year would have on her premiums).

The effect of changes in the benchmark premium relative to other plans is magnified for subsidized enrollees because the tax credit is tied to the premium for the second-lowest silver plan in a given year. If the same 40 year-old in the example above makes $30,000, she would be paying $208 per month in 2016 for the benchmark plan (offered by BCBS) and the federal government covers the rest through a tax credit. In 2017, if she switches to the new benchmark (offered by Neighborhood), she would continue to pay about $208 per month (assuming she continues to have the same income and family size in 2016). However, if she stayed in the BCBS plan, she would have to pay that amount plus the premium difference between the Neighborhood and BCBS plans, or a total of approximately $250 (an increase of about 20%, before accounting for a relatively small effect of aging one year and before accounting for any amount attributable to non-essential health benefits that may be covered by either plan). To keep her lower premium, she has to be willing to switch plans.

Experience in this market suggests that a sizable share of people enrolling in 2017 will actively shop for coverage. A research brief by the HHS Office of the Assistant Secretary for Planning and Evaluation (ASPE) found that about two-thirds of Healthcare.gov enrollees actively shopped in 2016, including 43% of renewing enrollees and all new shoppers.  While several reports of premium increases had suggested that premiums would increase in the double digits in 2016, the ASPE analysis found that, after accounting for shopping, marketplace premiums increased 8% before subsidies. For enrollees receiving a subsidy, the increase in the amount they paid was 4% on average.

The number of insurers participating in these states’ marketplaces ranges from 2 in Vermont, Connecticut, DC, and Rhode Island, to 15 in New York. On average, 5.8 insurers (grouped by parent company) will offer coverage in these 17 states in 2017, which is less than the average participation in 2015 and 2016 (an average of 6.9 and 6.5 respectively), and slightly less than the number that participated in 2014 (5.9 on average).

In some marketplaces, there will be both entrants and exits.  In Colorado, for example, UnitedHealth and Humana are exiting, while a new insurer, Bright Health Plan, is entering.  Similarly, in Indiana, UnitedHealth and a local insurer are exiting, while Aetna is entering in 2017.  In total, 6 of the 17 marketplaces will have new entrants in 2017. Oregon will experience the largest drop in insurer participation – losing 3 on net.  Even so, Oregon will have 7 insurers, which is higher than average.

Recent reports of substantial increases from some insurers have led to concerns regarding the stability of the ACA’s marketplaces. There is reason to believe that premium increases in the ACA’s marketplaces will be higher in 2017 than in recent years. However, anecdotal examples of premium hikes or averages across insurers can provide a skewed picture of the increases marketplace enrollees will actually face. As noted above, about 8 in 10 marketplace enrollees are receiving government premium subsidies, and these enrollees are protected from an increase in premiums if they continue to be enrolled in a low-cost plan. Regardless of tax credit eligibility, most enrollees have multiple plans from which to choose and can often save money on their premium by switching to a lower-cost plan. Experience has shown that many enrollees are willing to switch plans to avoid a premium increase, even though this might mean changing insurers and potentially doctors as well.

Another recent concern over the viability of the exchange market has stemmed from the news that UnitedHealth would exit all but a handful of the 34 states where it had participated.  However, in earnings calls, other large insurers have expressed more confidence in the exchange markets, with some planning expansion into new markets.  On average, across the 17 marketplaces where we analyzed premium data, insurer participation in 2017 will be lower than in 2016.  Often the decrease in insurer participation in 2017 is resulting from the exit of UnitedHealth.  In all of these states, there are multiple insurers continuing to offer coverage.  A remaining question, though, is how insurer participation will vary geographically, and particularly in rural areas where a number of counties may be at risk of having just one insurer.

Premiums that are reviewed by states or the federal government and made final for 2017 marketplace plans will become available for these and other states over the next few months, with complete information for all 50 states and the District of Columbia typically becoming public shortly before open enrollment, which begins November 1, 2016.

Data were collected from health insurer rate filings submitted to state regulators. These submissions are publicly available for the states we analyzed. Most rate information is available in the form of a SERFF (System for Electronic Rate and Form Filing) filing, which includes a base rate and other factors that build up to an individual rate. In states where filings were unavailable, we gathered data from tables released by state insurance departments. Filings are still preliminary. All premiums in this analysis are at the rating area level, and some plans may not be available in all cities or counties within the rating area. Rating areas are typically groups of neighboring counties, so a major city in the area was chosen for identification purposes. Weighted averages are weighted by marketplace enrollment in the state in 2016.

In some cases, the plan that has the second-lowest full-priced silver premium is not the benchmark because two or more other plans may have lower premiums when accounting for the portion of the premium that is attributable to non-essential health benefits. Because this information is not consistently available in these states, we present the second-lowest full-priced silver plan and note that it may or may not indeed be the benchmark used for subsidy calculation.