Section 1: Views of U.S. Role in World Affairs and in Global Health Efforts

Most See a Major Role for U.S. in World Affairs Generally and in Global Health Specifically 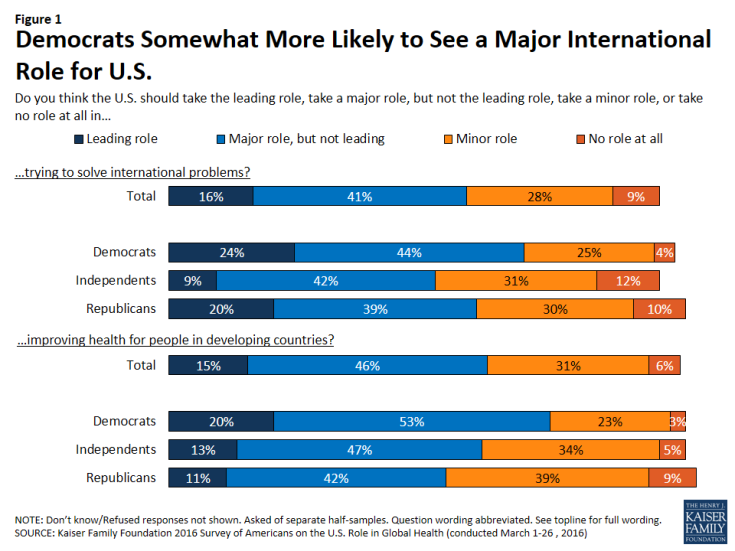 The majority of Americans think President Obama and his administration have made improving health for people in developing countries about the same level of a priority (54 percent) or a higher priority (27), compared to previous presidential administrations, with only about one in ten (11 percent) saying President Obama has made it a lower priority. Consistent with the overall sense that the U.S. should take a major role in this area, over four in ten (43 percent) say they would like the next president to make improving health for people in developing countries an even higher priority, while a similar share (39 percent) say the current priority level is about right and just 14 percent would like it to be a lower priority. Democrats are more likely to say that President Obama has made improving health a higher priority (38 percent) and are more likely to say they would like to see the next president make it a higher priority (53 percent) compared with independents (23 percent and 42 percent) or Republicans (21 percent and 31 percent). 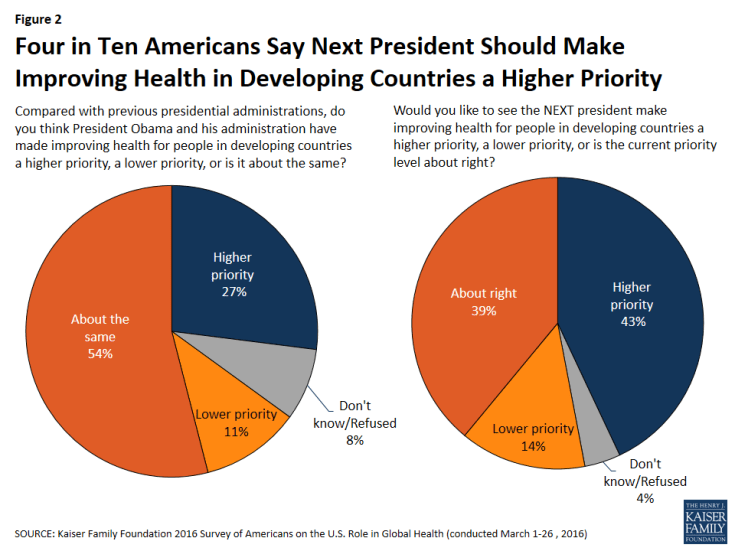 When it comes to different ways in which the U.S. might engage in world affairs, fighting global terrorism (64 percent) and protecting human rights (60 percent) top the public’s priority list. These are closely followed by protecting the environment and fighting climate change (51 percent) and helping out in areas affected by natural disaster (50 percent). 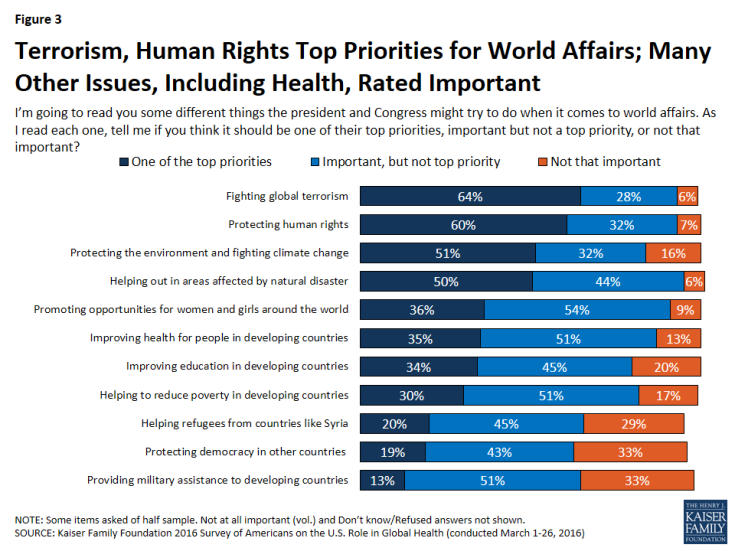 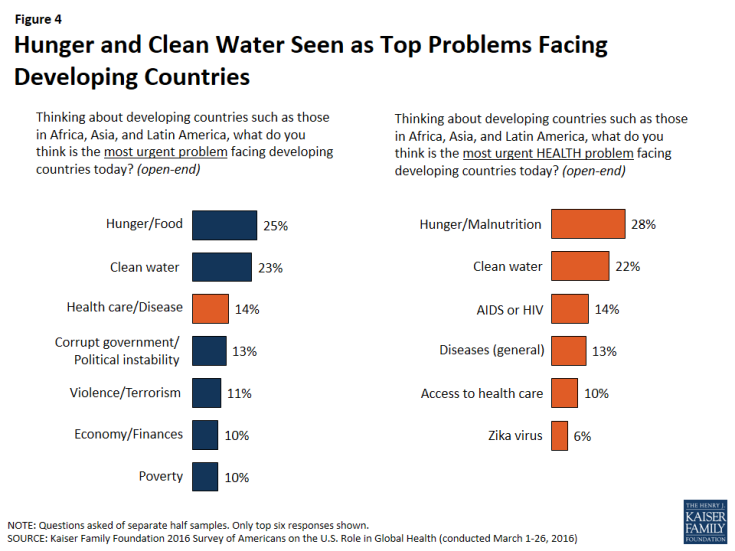 The share of Americans who name clean water as an urgent problem in both these questions has increased significantly in the past four years. In 2012, only 7 percent of Americans said that clean water was one of the most urgent problems facing developing countries, and just 12 percent named it as the one of the most urgent health problems. The increased concern regarding access to clean water in developing countries may be due to recent media attention about water quality issues in the U.S., particularly surrounding the water crisis in Flint, Michigan.

The focus on clean water and reducing hunger is also evident in opinions about priorities for U.S. efforts to improve health in developing countries. Topping the list, 69 percent of Americans say that improving access to clean water should be one of the top priorities. This is slightly more than the percent who say by combating global outbreaks of diseases like Ebola and Zika (62 percent), improving children’s health (61 percent), and reducing hunger and malnutrition (61 percent) are top health priorities. While others – including combatting specific diseases like HIV/AIDS, malaria, tuberculosis, and polio as well as improving access to family planning – fall farther down the list, majorities of the public view each one of these areas as important, with fewer than a quarter saying each is “not that important.” 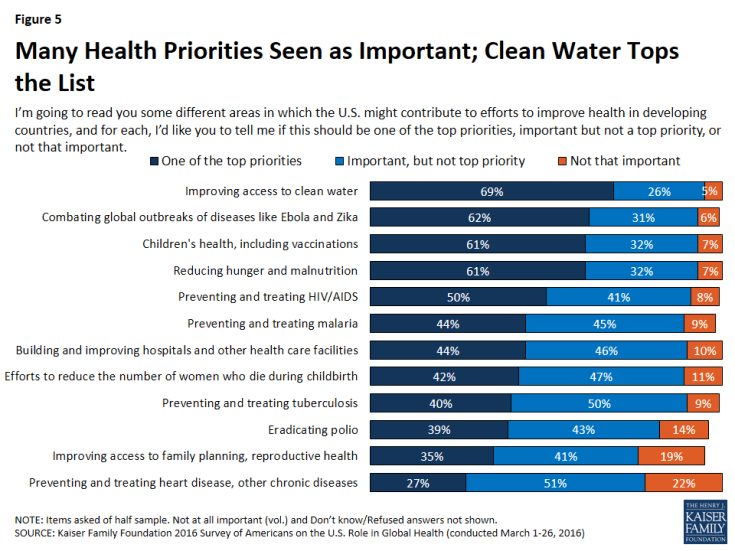 Mixed Attitudes on Whether U.S. Efforts Have Led To Progress 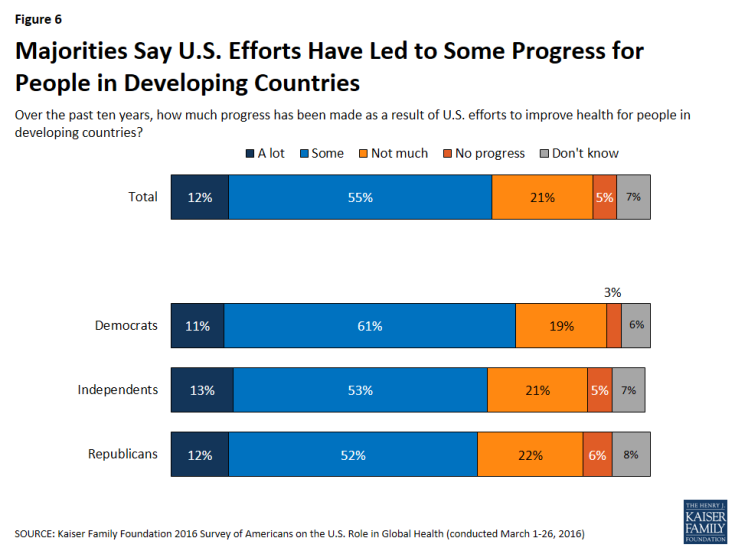 Figure 6: Majorities Say U.S. Efforts Have Led to Some Progress for People in Developing Countries

At the same time that most Americans believe progress has been made as a result of U.S. global health efforts, overall visibility of these efforts appears to have decreased. Just over a third (36 percent) of the public in the most recent survey say that in the past year they have heard “a lot” or “some” about U.S. government efforts to improve health for people in developing countries, down from nearly half in 2013 and 2012, and 57 percent in 2010. 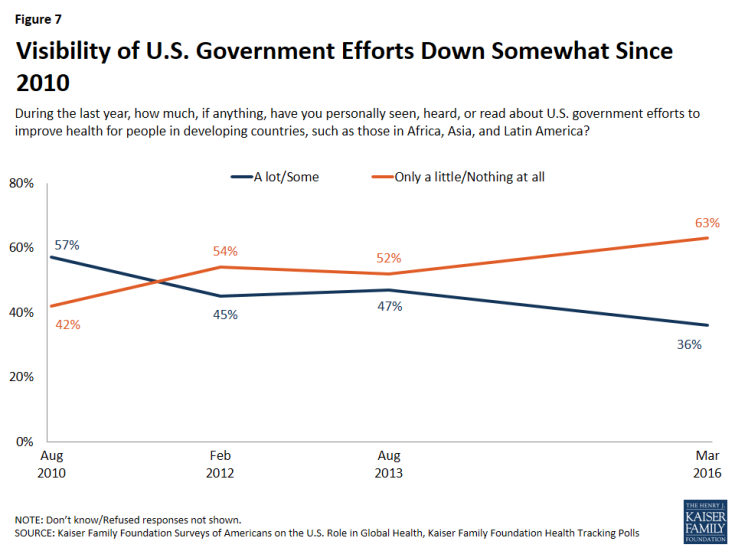 Figure 7: Visibility of U.S. Government Efforts Down Somewhat Since 2010

More Support For Global Health Spending Than For Foreign Aid 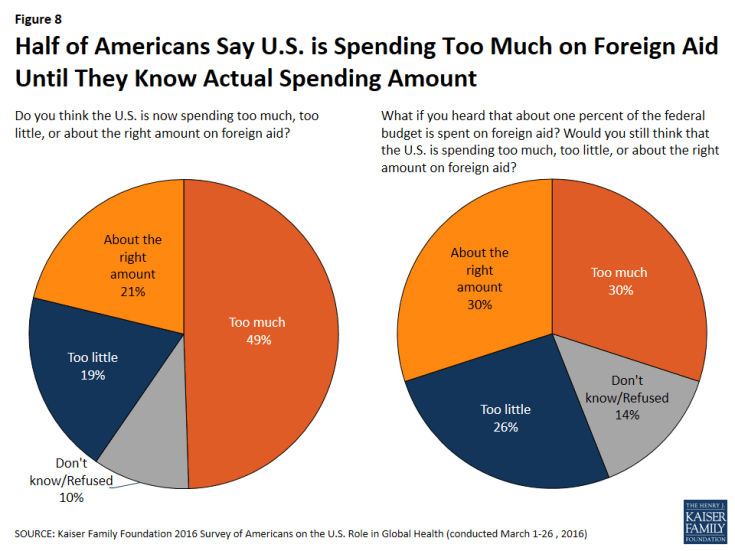 Figure 8: Half of Americans Say U.S. is Spending Too Much on Foreign Aid Until They Know Actual Spending Amount 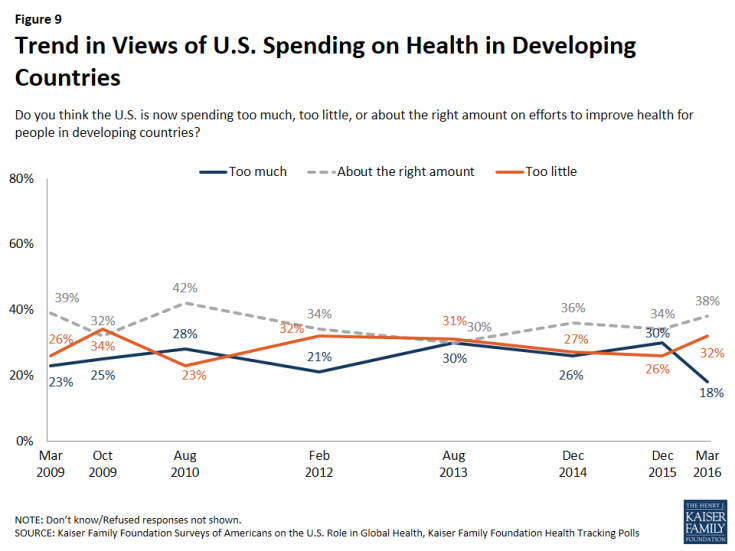 Figure 9: Trend in Views of U.S. Spending on Health in Developing Countries 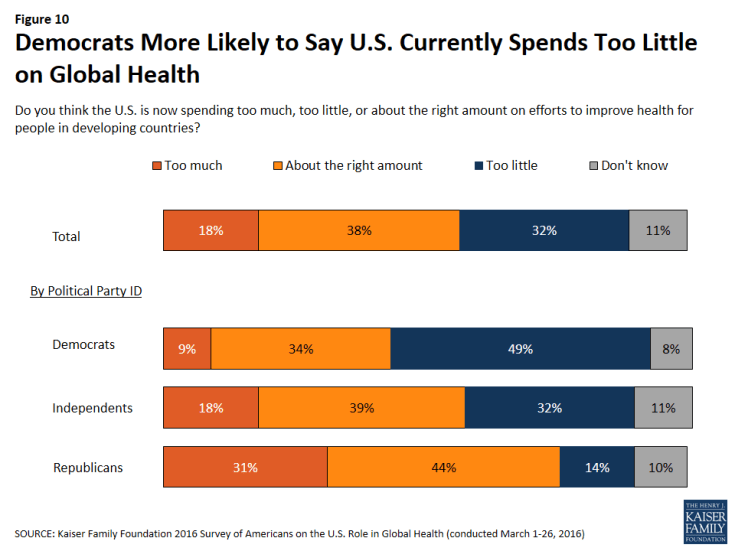 At the same time that the public generally supports maintaining or increasing government spending on health in developing countries, there is also doubt about the potential effectiveness of increased spending from the U.S. and other developed nations. More than half of Americans (57 percent) believe that spending more money will not make much of a difference in improving health for people in developing countries, while about four in ten (39 percent) say that more spending will lead to meaningful progress.

These partisan differences have increased over time, from a margin of 13 percentage points separating the shares of Republicans and Democrats who believed spending more would lead to progress in 2009, compared to a difference of 32 percentage points today. 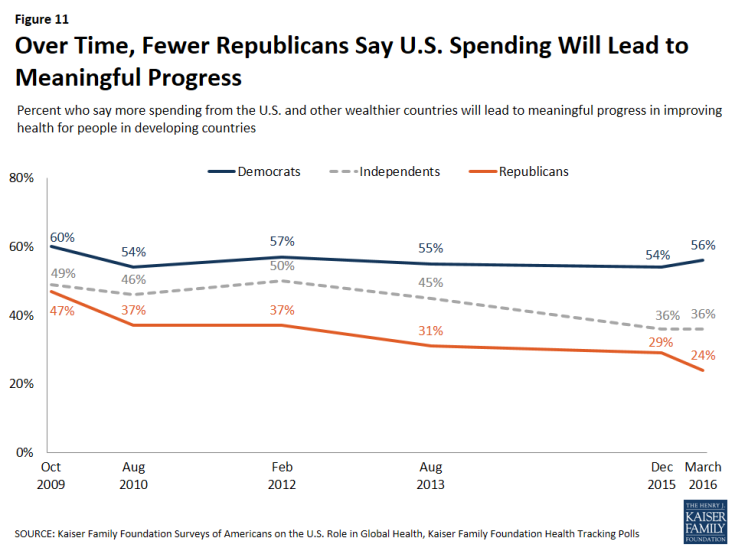 Americans see a variety of benefits, both at home and abroad, to U.S. spending to improve health in developing countries. About three-fourths (74 percent) say such spending helps protect the health of Americans by preventing the spread of diseases like Ebola and Zika, and nearly six in ten (59 percent) say it helps to improve the image of the U.S. throughout the world. Two-thirds (68 percent) also believe such spending helps make people and communities in developing countries more self-sufficient. Americans are more skeptical about the impact of such spending on U.S. national security and the U.S. economy, with about four in ten saying spending helps in these areas (41 percent each) and over half saying it doesn’t have much impact (56 percent each). Partisan differences exist here, too, with Democrats more likely than Republicans to say that spending on global health helps in each of these areas. Still, majorities of Republicans say spending helps protect Americans from disease (68 percent), helps make people and communities in developing countries more self-sufficient (59 percent), and helps to improve the U.S. image around the world (52 percent).

Determining How Global Health Spending Should Be Directed

In terms of which criteria should be used to determine allocation of U.S. spending on health in developing countries, the public, regardless of party identification, ranks two factors at the top of the list: whether a problem mainly affects children, and whether the U.S. could be threatened by a similar health problem (nearly seven in ten say each of these should be “very important” in determining how U.S. dollars are spent). Roughly half also say “how many people die each year from a given health problem” (55 percent) and “the number of lives saved relative to the amount spent” (49 percent) should be very important criteria. U.S. foreign policy concerns rank lower on the list, with 41 percent placing great importance on whether a country is friendly to the U.S., and just over one-third (36 percent) saying the same about whether spending is in the interest of U.S. foreign policy. 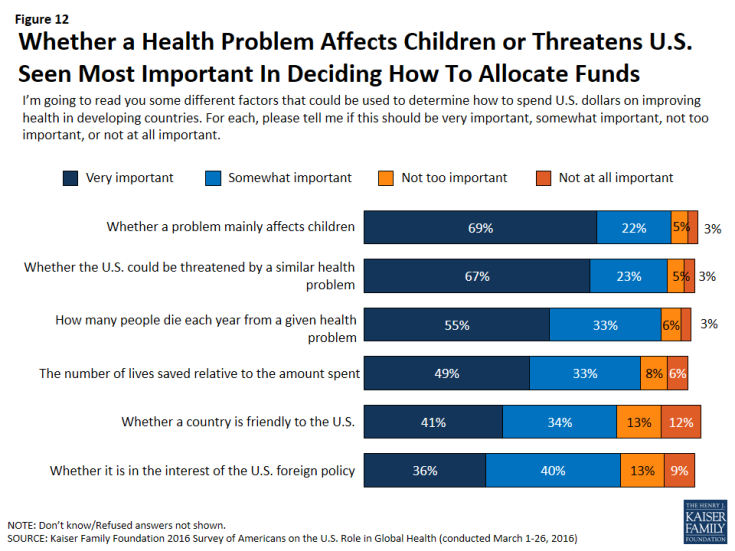 Figure 12: Whether a Health Problem Affects Children or Threatens U.S. Seen Most Important In Deciding How To Allocate Funds 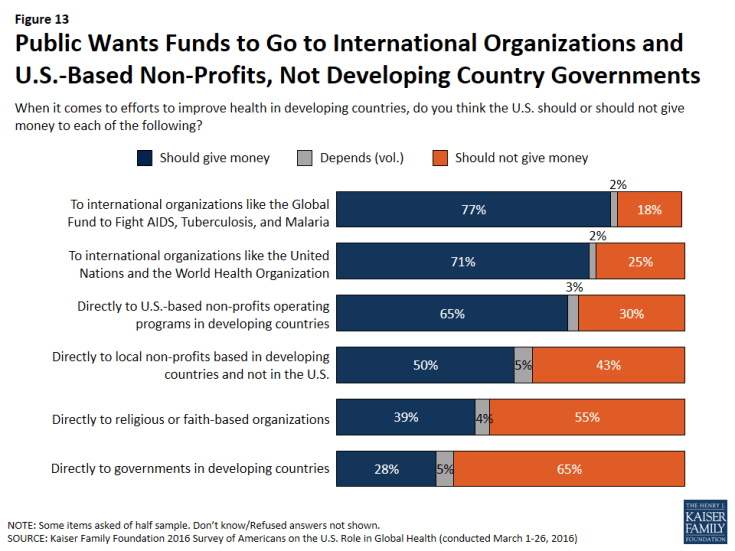 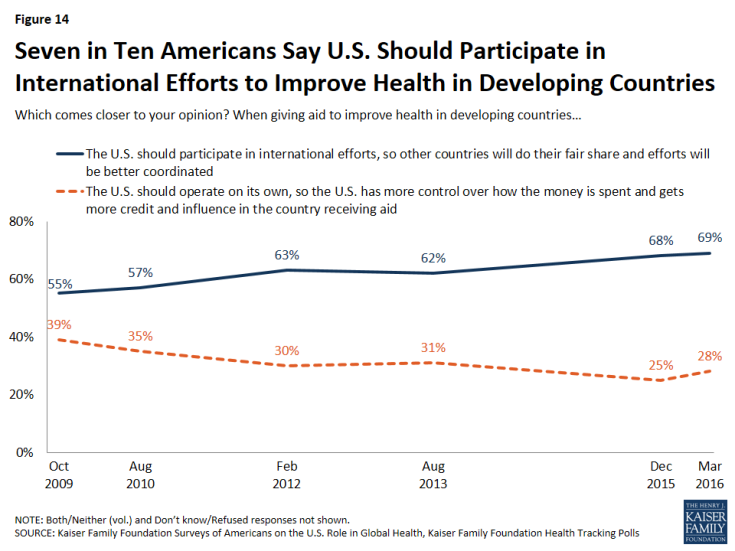 Introduction Section 2: Views on the U.S. Role Improving the Lives of Women and Girls in Developing Countries